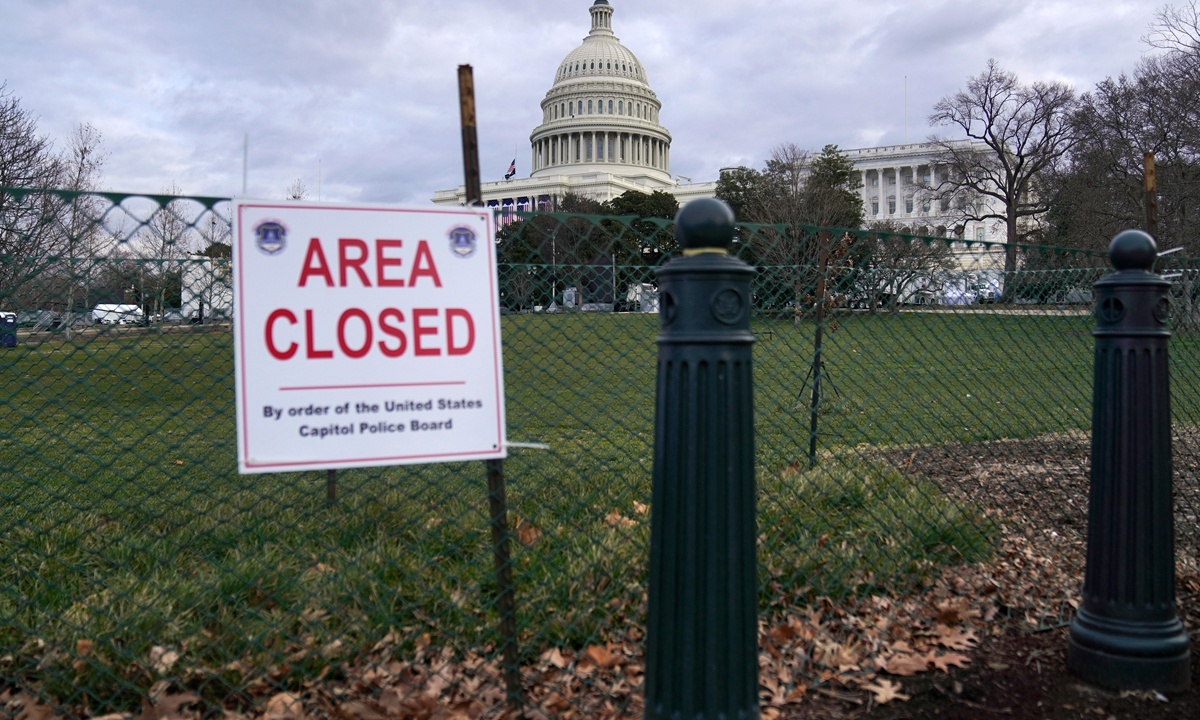 A sign reading "Area Closed" is posted on fencing outside the US Capitol on Sunday in Washington, DC. After riots at the Capitol Building, the FBI has warned of additional threats in the nation's capital and in all 50 states. According to reports, as many as 25,000 National Guard soldiers will guard the city as preparations are made for the inauguration of Joe Biden as the 46th US President. Photo: AFP

Freedom is a good thing, but if we overvalue or idolize freedom in an unrestrained sense, it has the opposite effect. It will eventually cause unimaginable tragedies, which America is now suffering from.

Here is the evidence of how the American model of freedom has caused four disasters.

Disaster One: From a 'Moment of Reflection' to a 'Fatal Conceit'

The new American administration repeatedly says that America needs reflection ever since last year's elections. But in its eyes, this reflection does not mean recovery and tolerance, but a horror that the Statue of Liberty will collapse, and a worse form of bigotry and radicalism.

To maximize its benefits, America pulled out of Afghanistan, betraying a promise to make it a free and democratic paradise, without ever explaining or apologizing to the Afghan people. It bombed Syrian civilians in the name of freedom, without ever reflecting on itself or feeling any sense of guilt for the millions of people that died and became displaced in the Arab Spring.

America now broadcasts the COVID-19 vaccines as a trophy of freedom, and blames the anti-liberalism, anti-democratic Trump for its own failures in the fight against the pandemic. Even worse, America hoards excess vaccines and turns a blind eye to the allies that are in urgent need of vaccines, while young people in those countries pay the price of following the free American lifestyle model with their lives.

Despite the complicated situation faced by the whole world, America is investing immense energy and resources to arrange the Global Democracy Summit. This will predictably be a religious ceremony to celebrate America's passing of the pandemic test and its return to "the city upon a hill."

The only thing America seems to think it needs to reflect on is the fact that Americans are not devout or zealous enough about the American model of freedom; and more countries around the world are beginning to question it. Freedom is the pillar of America's founding spirit and now that model has already started to fade, mutate, change, and disappear.

Friedrich August von Hayek stressed in The Fatal Conceit that we must stay vigilant so that the absolute rationality does not turn into conceit, there is no universally applicable institutional design, and a good institution grows naturally out of the practices. In his book, Hayek criticized the former Soviet Union's structural petrification. America, however, is following the antiquated ways of the Soviets, indulging in the presumptuous "universal values" and sinking deeper into fatal conceit.

Disaster Two: From 'Freedom as Autonomy' to 'Sin of Indulgence'

Humans have been seeking freedom since the beginning of civilization. According to the ancient Greek philosopher Socrates, freedom means self-constraint and doing good. His idea carried on in early modern Europe, as embodied by Kant's idea of freedom as autonomy and Hegel's thought that freedom has to be won through discipline.

The American puritans, regarded as the source of American spirit, were known for their belief in asceticism. In the late 19th century, sociologist Max Weber demonstrated systematically in The Protestant Ethic and the Spirit of Capitalism that the self-discipline ethic played a decisive role in the rise of the West.

Unfortunately, American freedom has betrayed these ideals of autonomy. It ignores and destructs all discipline and norms in the name of freedom. It has arrived to the point of irrationality and absurdity.

In the 1970s and 1980s, the unethical model of American freedom brought about wide concern. Former American president Jimmy Carter once warned his people that America was a prisoner to great emptiness and said that too many of them were slaves of self-indulgence and consumerism.

However, news of victory in the Cold War altered Americans' perceptions. America had once worried that the Soviet Union would attack its institution of freedom by taking advantage of the chaos that followed the sexual revolution, the AIDS epidemic, and the spread of sexually transmitted diseases. Upon the collapse of the opponent, that worry turned into arrogance. This arrogance challenged marital, familial, and social ethics that produced a sense of progress and superiority.

Today in America, sexual freedom has evolved into the freedom of sex trade and sex work. Many states in the US have legalized prostitution. Widespread pornographic culture has given rise to a surge in the number of extramarital births and single-parent households.

After the COVID-19 outbreak last year, young Westerners didn't follow the epidemic prevention and control measures. They flouted the lockdown mandates, refused masks, and ignored social distancing. Instead, they went to parties and shindigs. Extremists waved their guns and protested around city halls, and claimed that the lockdown measures deprived them of their freedom. Some ignorant young people even started online challenges that embraced the arrival of the virus and licked toilet seats to flaunt their freedom.

Ethics and progress do not necessarily conflict with each other, nor do autonomy and freedom. When the model of American freedom reaches the point of shamelessness, there is no progress. There is only degradation.

Thomas Philippon, a professor of finance at New York University, said in The Great Reversal: How America Gave up on Free Markets that America has become a manipulated market. Lobbyists speak for the few with vested interests and milk as much of the market value as they can, then set legal barriers against those who might come after them for it.

When America rolled out technology bans, unilateral sanctions, access barriers, and decoupling moves, no matter how compelling its rhetoric was, it did nothing more than secure the interests of monopolists, kill free competition, destroy free markets, and unavoidably damage not just the interests of American consumers, but in the end, the reputation of America as a market economy. When America fears losing in competition, it is the beginning of an irreversible decline.

The American dream to get rich through competition has been ruthlessly shredded by the Wolf of Wall Street, raised by the financial monopolists. The 2011 Occupy Wall Street movement protested systematic financial speculation, government embezzlement, and the rising polarization between the rich and poor. Today, the richest 0.1 percent of US households possess the same amount of wealth as the 90 percent of all American households. In 1970, 90 percent of young Americans lived a better life at the age of 30 than their parents did, and today that number is below 50 percent.

America has a magic power to distort facts. It demonizes the majority's pursuit of free and fair competition, poses protectionism as "safeguarding fair competition," and portrays the 99 percent against 1 percent appeal for justice as a violation of the legal system.

The developing countries and the people who are treated unfairly all around the world are asking for a right to free competition, fair rules, and equitable distribution. Those who seek to profiteer by means of monopoly, sanctions, speculation and circumventing the law are the enemy of the public.

Disaster Four: From 'Dream of Equality' to 'Pain of Polarization'

There are many who are still under the illusion that the American model of freedom helps the weak and implements equal rights through affirmative action. But in fact this is an unachievable fantasy that brings the pain of polarization in society.

When American progressives want to implement the tenet that all men are created equal, they encounter the sacrosanct private property rights that cannot be violated. To resolve this apparent contradiction, America found a shortcut for moral victory: identity politics. Identity politics amplifies the identity consciousness and right claims of the disadvantaged class. "I have a dream" myths are fabricated in the media, elections, and on soapboxes, constructing a wonderland-like imagination of equal rights.

Ethnic minorities, those with disabilities, the elderly, vegetarians, drug addicts, LGBT groups, radical animal rights activists and other groups raise their flags to claim the rights of their interest. Identity politics crushes, confounds, and contaminates the ideals of justice. It leans closer to fantasy than rights. It serves to boost the ambience of an election campaign or as a politician's talking point.

The Obama administration was elected with the support of racial and ethnic minorities. Eight years later, America was still a place where the income, education level, and crime rates of African Americans continued to deteriorate. Yet another disastrous consequence that came out of it was the rise in resentment in the middle and lower class whites due to the insult they felt as a disadvantaged class, and in retaliation they elected their spokesperson: Donald Trump.

The new American administration cries out familiar equal rights catchphrases, while polarization deepens in society. The impeachment of Trump and the trial of the white police officer are nothing more than political shows for the lowest class to consume. They are only the prologue to the strong return of populism. The empty chants of consensus, solidarity, reconciliation, and progress can no longer cover up the deepening cracks or the bleak reality.

Is the American model of freedom real? History will give its verdict.

The author is a current affairs observer.