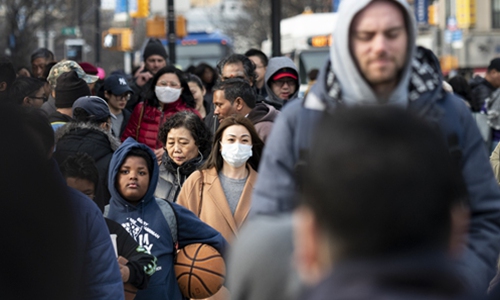 People wear face masks as they walk down a street in Flushing area of Queens on Monday in New York City. (Photo: AFP)

Fox News host Jesse Watters blatantly asked the Chinese for "a formal apology" because "this coronavirus originated in China." His cohost asked, "What if the outbreak had started here [the US]?" Watters asserted that the epidemic started in China. He even stated in his show, "They are very hungry people. The Chinese communist government cannot feed the people, and they are desperate. This food is uncooked. It's unsafe, and that is why scientists believe that's where it originated." These remarks make him look like a hooligan.

The Communist Party of China "cannot feed the people" so that Chinese have no choice but to eat "raw bats and snakes." Is this how a popular American host sees China? Watters' complete and utter nonsense on the TV show makes people wonder how distorted US public opinion is against China. It seems that if one scolds China, he does not need to beat his brains or use common sense at all; he can talk as tough as he wants of China without being held accountable.

Imagine that a Chinese host demanded a formal apology from the US people on a TV show after the 2009 H1N1 flu spread to the world from the US, or after AIDS, a disease reportedly first tracked in North America, became a global epidemic. Let alone how the US and the international community would respond, could the Chinese public accept his performance?

Viruses are a common enemy of human beings. They may invade people's lives at any time. It has not yet been determined where and how the novel coronavirus originated from. This is a scientific question which should in no way be politicized or taken as an ideological issue.

Watters, one of the most radical TV hosts on this issue, is a disgrace to the entire international press circle.

The world saw the outbreak of the epidemic in Wuhan and how the Chinese people were mobilized and paid enormous efforts to fight the virus. The Chinese people have put the epidemic under control at a huge cost and won the world time to prepare. China's attitude and action are respectable. China not only contained the spread of the virus, but also offered a useful lesson for the world.

Now that the epidemic is hitting the world, it is time all countries joined hands to combat it. But Watters misled the public by turning a public health issue into a conflict between countries.

He demanded China apologize and labeled the epidemic with Chinese cultural and political scoundrelism. By the same token, should the Chinese people complain about countries which did not manage to contain the spread of the virus even after China sounded the alarm? Should the Chinese people accuse their systematic flaws and blame these countries for exporting infected cases back to China and dragging down China's feet?

It is shameful Watters provoked such conflicts at a time when humanity is facing a common challenge.

The malicious act of Fox News and Watters, driven by their selfishness, is the negative energy in the global anti-epidemic fight. The novel coronavirus respects no race or border. Only narrow-minded nationalists and those with ulterior motives would attack a certain country by exploiting this public health crisis.

As Philippine Foreign Secretary Teodoro Locsin said in a tweet, "we must deplore the lies spread by govts and people who are stooping so low as to use a threat against all humanity as an instrument of geopolitical strategy. Shame on them."