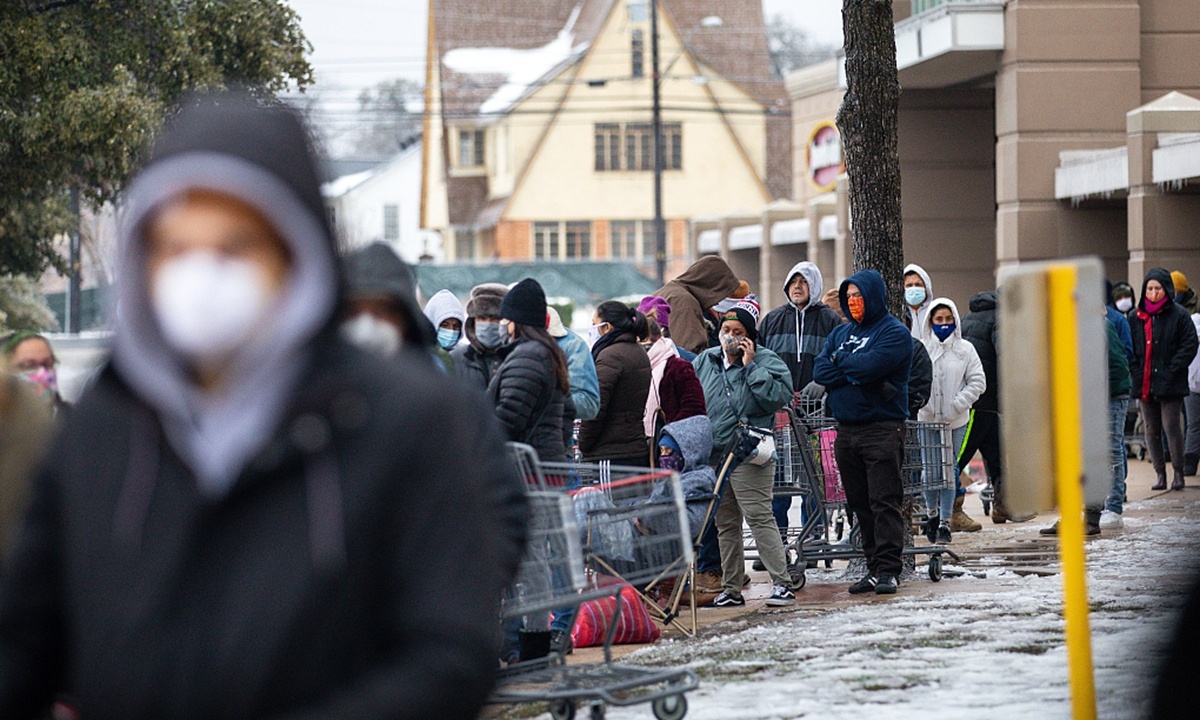 People wait in long lines at an H-E-B grocery store in Austin, Texas on February 17, 2021. Millions of Texans are still without water and electric as winter storms continue. (Photo: VCG)

US President Joe Biden declared on Saturday that "a major disaster exists in the State of Texas." Although the disaster declaration fast-tracks the approval of more federal assistance to the state, the move seems to have come too late. Local residents' loss of lives and properties is irreversible. Water quality issues are still affecting 14 million people there.

Texas is a majority Republican state. It didn't welcome any federal assistance. The still deepening division and struggles between the two parties are undoubtedly one reason why so many Texans couldn't get help after being hit by the winter storm. Only ordinary people - no matter which party supporters they are - are suffering from the constant political wrangling.

A large number of Americans actually feel desperate that the current capitalist system with serious flaws in the US cannot help them with their concerns. As a result, ruthlessness bewitches American society, continuing to spoil the national mood after the electoral mess last year and the Capitol Hill riot on January 6.

Generally speaking, the US believes that its so-called American model based on capitalism is superior to other countries' paths. These narratives spun by US elites have already been proven to have opened deeper wounds in American society. However, a number of US elites still hold on tight to their outdated mentality. They refuse to admit to the US' critical defects. By being complacent, they will eventually lose ground and become indifferent in the international community.

This is causing more American people to feel more uncertain about their future. This is also why deviant people like former president Donald Trump still have a base that is not small in the US - filled with people who don't really have better options.

The US' internal problem is too severe and is a deep-rooted disease. Profound reform is required in the US. Otherwise the country will have to face a very dangerous and bumpy road going forward into a hazy future. And American people's feelings of uncertainty and their dissatisfaction with status quo will thus grow stronger with more people like Trump surging into political circles. Such an outcome will be a tragedy for both the US and the rest of the world.

The COVID-19 epidemic raging across the US combined with natural disasters such as wild fires in California and the winter storm in Texas have unmasked the drawbacks of the US capitalist system's true nature. Overly emphasizing private business while pushing aside public welfare has resulted in the prevalence of Social Darwinism in the US - the interests and health of the ordinary majority are not taken care of. Only the privileges of a few wealthy groups are given proper treatment.

Without profound reform from within, the perniciousness of the US capitalist system would be further apparent. It is difficult for the current US system to engage in effective reforms. Additionally, the US will undergo more emergencies if needed reforms are not carried out.

The situation for the US today is similar to 1933 when former president Franklin Roosevelt took office. The socialist path was discussed back then and now, but such voices have all finally been marginalized. The US didn't stop demonizing socialism in the past decades. Nor does it now. Tim Boyd, the former mayor of Colorado City in Texas who told people of his city in a post on Facebook on Tuesday to survive on their own, has claimed that relying on the government for "handouts" in a disaster "is sadly a product of a socialist government."

Boyd's words have reflected the profound divergence between Democrats and Republicans over social reforms. The Democratic Party eyes "big government, small society," while the GOP prefers the opposite. The two principles have been conflicting with each other, but they did manage to strike a balance and be somewhat complementary in the past. However, the two are irreconcilable and hostile toward one another now.

Although the American model has been shown to be more and more dysfunctional the US refuses to admit to this fact. And it is reluctant to draw lessons from other countries.

Therefore, the US' political and social reforms will definitely be carried out within the frame of the country's capitalist system: based on individualism and private economic premises and nothing more.

But under this framework, if reforms or modifications fail to achieve desired goals, ordinary Americans will have no choice but to endure the results however bitter they are. The core concerns of the American people to make the overall state of society turn for the better will go unanswered. This is undoubtedly very unfortunate for them.

The author is a professor with the Institute of International Relations at the China Foreign Affairs University.