OPINIONS Funds for the fight must beefed up

Funds for the fight must beefed up 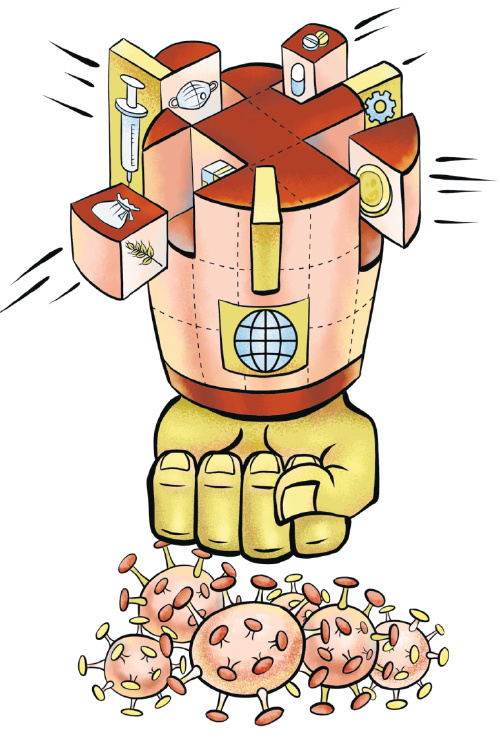 Even though vast amounts of resources have been mobilized internationally in response to the worldwide spread of the novel coronavirus, there are still gaps in the prevention, response and alleviation of the impact of the pandemic.

According to estimates by the International Monetary Fund, emerging markets are in need of more than $2.5 trillion in financing, which far exceeds the sum of the reserves and domestic resources of these economies. The United Nations Conference on Trade and Development (UNCTAD) has also called for a $2.5 trillion assistance package for developing countries to help them avoid the worst-case scenario and its possible fallouts. To this end, there is an urgent need for the international community to mobilize resources to overcome this common challenge faced by all humanity.

First, it is necessary to step up resource allocation to the WHO to further increase its response capacity. The WHO has a relatively modest budget, with only $4.84 billion for 2020-21; in other words, it is overstretched in its efforts to respond to such a grave public health emergency. In early February, the WHO published its COVID-19 Strategic Preparedness and Response Plan (SPRP) to support countries' prevention and response efforts. According to the WHO estimates, the SPRP requires $675 million in its first iteration. However, due to limited resources available for mobilization, the WHO had to call for donations, and the plan remains underfunded. The WHO has also established a COVID-19 Solidarity Response Fund together with the UN Foundation and the Swiss Philanthropy Foundation, and the fund is open to receiving donations in order to assist countries with weak health systems in their COVID-19 prevention and response efforts.

It is necessary to increase the WHO budget for SPRP. The WHO Contingency Fund for Emergencies, which was established in 2015 in response to the Ebola epidemic, is also in need of beefing up. The fund can make resources available in a timely manner to enable effective response to the outbreak of diseases.

Second, the IMF made $50 billion available in March through its rapid-disbursing emergency financing facilities for low-income and emerging market countries and announced plans to double the facilities. Additionally, the IMF is also providing up-front grants to eligible countries through its Catastrophe Containment and Relief Trust for relief on IMF debt service falling due, to free up funds for tackling the health crisis. While on April 2, the World Bank announced that it would deploy $160 billion over the next 15 months to support countries' efforts to protect the poor and vulnerable, bolster private businesses and promote economic recovery.

But IMF Managing Director Kristalina Georgieva has disclosed that over 80 countries have submitted requests for the IMF emergency financing as a result of the pandemic, a scale unprecedented in the history of the fund. The World Bank also indicated that many of the world's low-and middle-income countries are still in the early stages of the COVID-19 pandemic, and could be in need of increased funding support in the future.

The quickest way to increase the resources of the IMF and World Bank is increasing quotas. Having said that, General Reviews of Quotas only take place at regular intervals, and approvals for quota increases often require reforms to the governance structure, which are not always feasible. In February, the IMF's Board of Governors adopted a resolution to conclude the 15th General Review of Quotas with no increase in quotas. The 16th review is expected to be concluded before the end of 2023.

Therefore, other alternatives need to be considered for capital increase.

Many experts have suggested large-scale SDR allocations, which can increase member countries' reserves and reduce their need for external financing, all without having to increase the total resources at the IMF. Kevin Gallagher from Boston University and Edwin M. Truman from the Peterson Institute for International Economics (PIIE) are among those calling for an SDR allocation of at least $500 billion, while UNCTAD suggests that a minimum of 730 billion in SDR (approximately $1 trillion) to be allocated to low-and middle-income countries. In light of this, the new round of allocation should be between 2 to 3 trillion in SDR.

The G20 should play a leading role in international resource mobilization. The G20 is a major platform for international economic cooperation, and most of its members are major contributors of resources. The G20 is also a source of political impetus for capital increase and SDR allocation. The Statement made at the G20 Extraordinary Leaders' Summit on COVID-19 also pledged that the G20 would ensure adequate financing to contain the pandemic and use all available policy tools to minimize the economic and social damage from the pandemic. If the G20 delivers on its promise, there will be reason to believe that the international community can score a timely victory over the pandemic.

The author is an associate research fellow at the Institute of World Economics and Politics at the Chinese Academy of Social Sciences. The author contributed this article to China Watch, a think tank powered by China Daily. The views do not necessarily reflect those of China Daily.