OPINIONS G7 deluded if it believes communiqué will impact China

G7 deluded if it believes communiqué will impact China 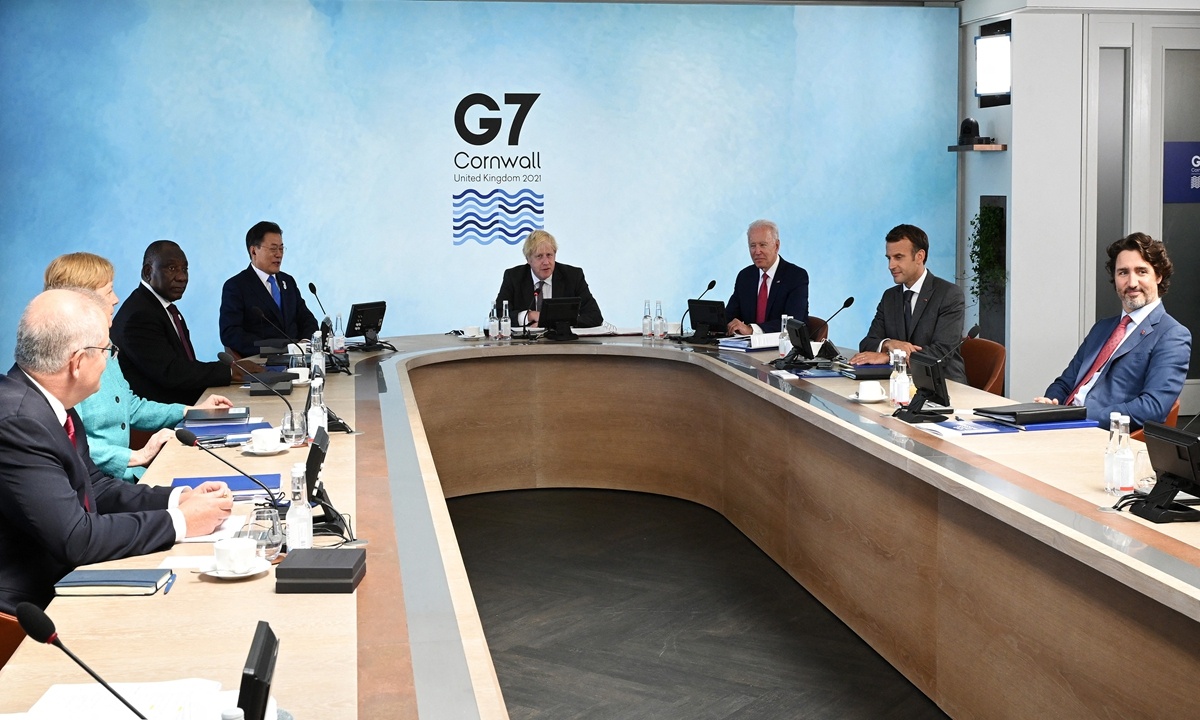 A working session of the G7 summit is held on June 12. (Photo: AFP)

Responding to a media question over whether the US was seizing the opportunity of the G7 summit to safeguard the so-called rules-based international system, the spokesperson of the Chinese embassy in the UK said on Saturday, "We [China] always believe that countries, big or small, strong or weak, poor or rich, are equals, and that world affairs should be handled through consultation by all countries. The days when global decisions were dictated by a small group of countries are long gone." This narrative has aroused wide concern of foreign media outlets.

Whether the common problems faced by the 193 member states of the UN are determined by a few countries or are negotiated by all members depends on whether the national interests of all member states are guaranteed. Countries, rich or poor, are encountering increasingly common problems and challenges, including the novel coronavirus pandemic, climate change and terrorism. If global affairs continue to be determined by a small number of Western powers, the solution will only take their interests into account, and the interests of other countries will be sacrificed.

With the rise of emerging powers and the decline of the West, the G7's current global influence and status cannot be mentioned in the same breath in comparison to the days when the bloc was just founded. Yet, the group still clings to the so-called values and the delusion that their small group can decide international affairs. This is the hegemonic logic of Western powers over world affairs.

Even though China was not represented at the G7 summit which ended on Sunday, it became the focus of the bloc's talks. The leaders of the G7 scolded China over "human rights" in Xinjiang Uygur Autonomous Region, called for Hong Kong to keep a high degree of autonomy and issued a highly critical final communiqué that delved into "what are for China some of the most sensitive issues, including the island of Taiwan," according to Reuters.

Since the establishment of the People's Republic of China in 1949, the US and some European countries have meddled in China's internal affairs. However, contrary to what they anticipated, China has ushered in rapid economic and social development, especially in the last four decades.

What they said has not thwarted China's development. China has developed rapidly over the past 40 years despite their repeated interference and efforts to create troubles for China. China should strategically despise them. What matters for China is how to concentrate on doing its own affairs well. This will be the most powerful response against G7 intervention. But tactically, China needs to pay essential attention. This is because it involves how to establish international order. By using human rights as a cover, these Western great powers would wantonly intervene in other countries' issues. Interfering in the internal affairs of other countries under the banner of human rights and morality is in nature an imperialist policy in the moral field.

Against this backdrop, the significance of the G7's narrative and the communiqué about China is far more symbolic than practical. And the Chinese need not to take them seriously.