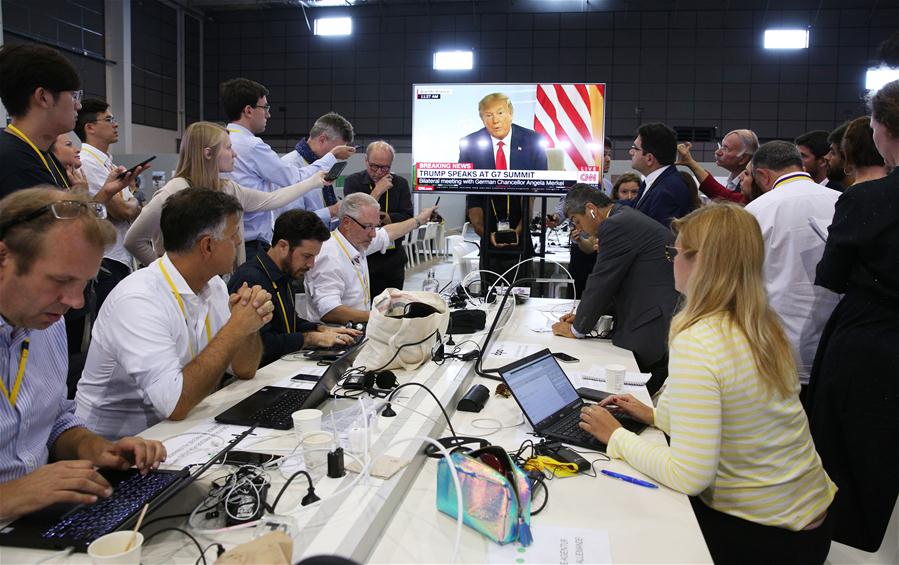 BIARRITZ, France, Aug. 26 (Xinhua) -- Instead of a communiqué -- an official report or statement that an important international conference is supposed to produce, leaders of the Group of Seven (G7) issued on Monday a one-page declaration to "underline their great unity and the positive spirit of the debates" when concluding the three-day summit in heavily secured French seaside resort Biarritz.

"The G7 is committed to open and fair world trade and to the stability of the global economy," said the declaration. "Therefore, the G7 wishes to overhaul the WTO (World Trade Organization) to improve effectiveness with regard to intellectual property protection, to settle disputes more swiftly and to eliminate unfair trade practices," the declaration read.

"The G7 commits to reaching an agreement in 2020 to simplify regulatory barriers and modernize international taxation within the framework of the OECD (Organization for Economic Co-operation and Development)," it added.

On Iran, the leaders of the group said they fully share two objectives: to ensure that Iran never acquires nuclear weapons and to foster peace and stability in the region.

However, analysts here believe that a couple of short phrases expressing hollow accord on basic principles over certain issues can not conceal the deep rift between the United States and Europe.

"So short a text implies that G7 members remain deeply divided," said Hua Xin, executive director of the Center for European Studies at Shanghai International Studies University. "We can guess the hot disputes these leaders had to have in order to formulate these several phrases."

In his opinion, the United States and its European allies only reached a face-value compromise on WTO reforms because their positions on this international organization differ fundamentally.

"The Trump administration takes an opportunist stand with regard to international bodies," he said. "With its 'America first' policy and economic nationalism, it will only make use of WTO rules when they can be used to defend their own interests."

"Therefore, the US is not really interested in the reform of the WTO. If they can not reform the body at their own will, they would rather get rid of it," he added.

"Trump deeply distrusts the WTO and sees it as a dead body, as it has only served to propone the kind of trade liberalization process he utterly rejects. He aims in the end to renegotiate all major trade relationships with fellow national political leaders, but not in the context of WTO," Bourgeot told Xinhua.

However, Bourgeot found the atmosphere of this summit has clearly improved among G7 leaders, compared to previous summits.

"The prospect of a global recession, the escalation of trade tensions and worries over their consequences on financial markets have encouraged leaders to insist on negotiations," he explained.

"However, tensions and disagreements remain fundamentally present," he noted. "French President Emmanuel Macron was concerned that the Trump Administration might focus on trade tensions with Europe, as was exemplified by the row over France's digital tax. And Trump, after imposing a new round of tariffs on China, wanted to insist more on the prospect for negotiations, which will however remain difficult."

On Iran, apart from the two basic objectives mentioned in the declaration, Trump said on Monday that he is open to a France-proposed meeting with his Iranian counterpart Hassan Rouhani "if the circumstances are right," adding "In the meantime, they have to be good players."

Denouncing again the "very bad deal" reached in 2015 with Tehran, Trump said the United States' demands are simple: Iran does not acquire either nuclear weapons or ballistic missiles.

On Sunday, Iranian Foreign Minister Mohammad Javad Zarif paid a surprise visit to Biarritz and had a three-hour talk with his French counterpart Jean-Yves Le Drian, without meeting any US officials.

"Europe has remained passive on the issue and renounced to really weigh on the issue of Iran since Trump's exit from the treaty, and now (it) tries to show more initiative," Bourgeot pointed out.

"The US administration's approach on Iran hasn't produced the expected results, as they didn't take into account the structure of Iran's political power and the country's unwillingness to back down on its regional influence," analyzed Bourgeot, noting "Given the red lines both in Iran and the United States, a true negotiation remains unlikely."

Hua Xin does not see any compromise on the Iranian nuclear issue from the US side either. "As the Trump administration has withdrawn from the Iran nuclear deal, it will definitely carry out the decision by pressuring Iran, although its approaches vary as the situation changes," he said.

"Having made great efforts to forge the deal in 2015, the European Union views the Iran nuclear deal as the symbol of its soft power, so it will never publicly abandon the deal and push itself into an embarrassing situation," he added. "It is quite probable that new conflicts between Iran and the US will surge sometime in the future."

The only concrete result that the G7 summit achieved might be on Ukraine, as "France and Germany will organize a Normandy format summit in the coming weeks to achieve tangible results," said leaders of the divided group in their declaration.