Despite growing at the lowest rate in nearly three decades given the complicated domestic and external situation, that China's GDP growth was 6.6 percent last year highlights the resilience of the world's second-largest economy, which remains one of the fastest-growing major economies and the largest contributor to growth of the world economy. 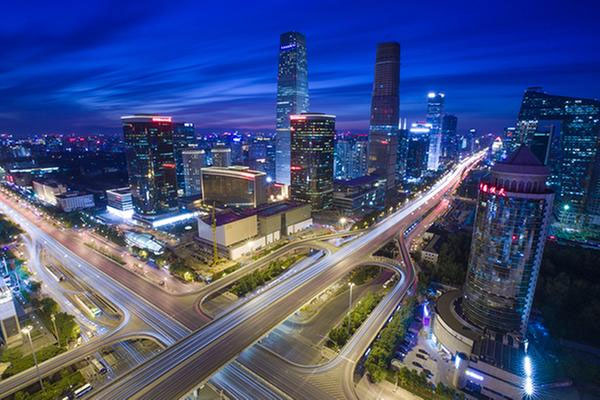 Beijing's Central Business District is seen in this night view of the city's skyscrapers, office buildings and highways. (Photos: VCG)

Admittedly, on a quarterly basis, the economy grew 1.5 percent in the fourth quarter, down from the rise of 1.6 percent posted in the third quarter, and economic indicators such as industrial output, retail sales and fixed-asset investment, all weakened last year, especially in the second half, prompting concerns that the trade dispute with the United States has begun to bite.

However, considering the sheer size of the economy — over 90 trillion yuan ($13.26 trillion) — it is to be expected that its growth rate should slow after decades of nearly double-digit expansion, especially at a time when protectionism is on the rise and the country is making ongoing efforts to restructure the economy to make its growth more sustainable.

Activity-dampening measures, such as cutting excessive production capacity and the closure of polluting factories, have inevitably proved a drag on the Chinese economy, but sacrificing speed for higher quality growth is necessary to secure sustainable growth in the long run.

Ning Jizhe, head of the National Bureau of Statistics, on Monday listed some of the recent progress China has made in its restructuring efforts: Consumption and the service sector have become the two pillars of the economy, manufacturing technology upgrading is making solid progress and new growth engines, such as e-commerce, have emerged and are expanding.

It will take time for the restructuring of such a large economy to fully take shape. But China is clearly making headway in its ongoing efforts to make the economy more efficient and growth more sustainable.

While the China-US trade dispute has hit investor confidence in the Chinese economy and dampened domestic trade-related activities, thus slowing growth, there is optimism that the ongoing negotiations will result in a deal. Even if the dispute is prolonged, China has plenty of room for policy adjustments and will do so as necessary to mitigate the effects and cope with the challenges.

And knowing that it is in the best interests of the country and its people, the country's leaders have indicated repeatedly that they are resolved to adhere to the course of reform and opening-up. While adopting targeted loosening policies, such as monetary easing to support the real economy, China will also deepen reforms in various fields to encourage competition, protect intellectual property rights, expand access for all types of investors and open its doors wider.

As the data show, the country has the foundation, conditions and capability to keep economic growth within a reasonable range, and ensure sustained and healthy economic development.