OPINIONS Global economic growth in 2021 should be clean, ethical

Global economic growth in 2021 should be clean, ethical 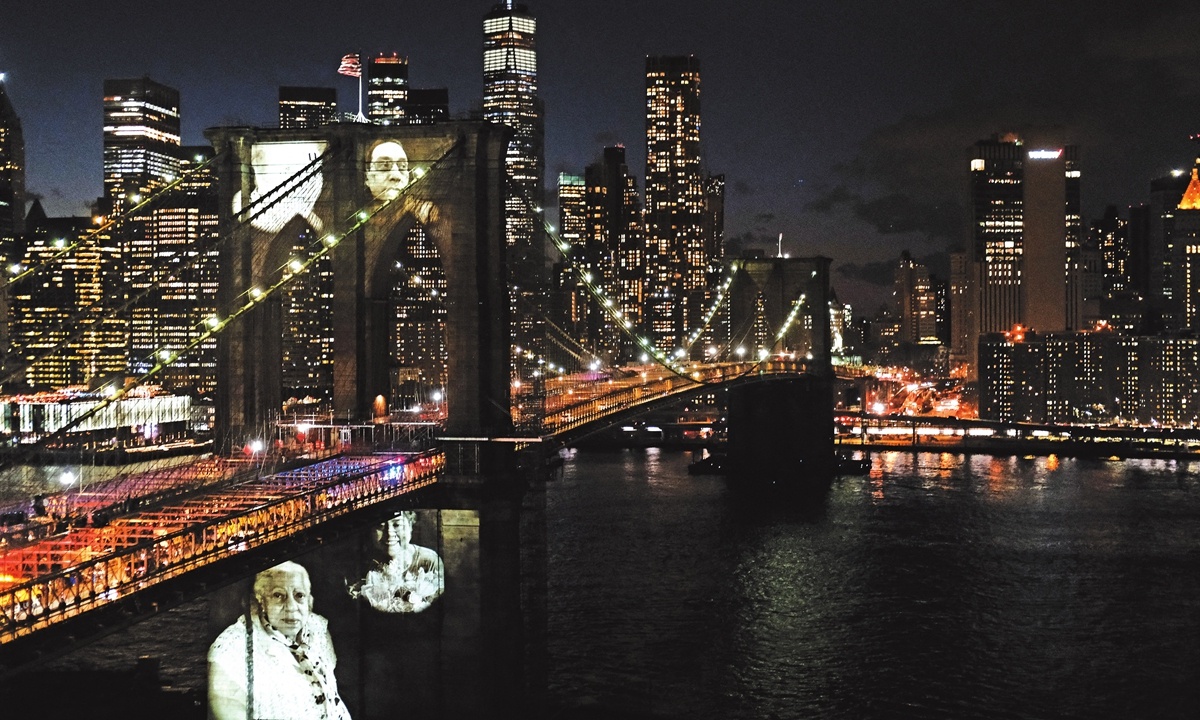 Faces of victims of COVID-19 are projected onto the Brooklyn Bridge during a memorial service called "A COVID-19 Day of Remembrance" in New York City, the US, on March 14. (Photo: AFP)

The International Monetary Fund (IMF) upgraded its global economic growth forecast for the second time for 2021 on Tuesday. According to the report, advanced economies will expand 5.1 percent this year, compared with the previous 4.3 percent. The US' growth is raised to 6.4 percent, up from 5.1 percent in January. Among developing countries, only China's economic growth is viewed optimistically with forecast of 8.4 per cent. Experts from IMF said that the divergent recovery paths are likely to create significantly wider gaps in living standards between developing countries and others, compared to pre-pandemic expectations.

There are two main reasons for the upward revision of growth forecasts in advanced economies, particularly the US. One is the rapid pace of vaccination and the other is the massive fiscal stimulus. Both are beyond the reach of most developing countries. The severe imbalance in global growth is a stark portrait of the world's inequality in 2021.

The US has made 150 million COVID-19 vaccine shot, the most in the world, while it has piled up the stock of vaccines. This country that clamors for human rights and often sanctions other countries with human rights as an excuse has refused to timely share the vaccines with developing countries to help the people in most urgent need. The "America First" in vaccination is chanted. The so-called human rights Washington claims have severely deviated from the real, urgent needs of people, and become a de facto weapon for the US to safeguard its hegemony.

The US is also the country most capable of implementing fiscal stimulus programs. Based on dollar hegemony, the US Federal Reserve adopted the policy of unlimited quantitative easing to serve short-term political interests. Joe Biden signed a $1.9 trillion COVID-19 economic relief package as soon as he took office. Now his administration has introduced a $2.25 trillion American Jobs Plan. Together with the Trump administration's large US financial stimulus package, trillions of dollars have flown into the market. However, the prosperity they will bring is destined to be distorted, as it will increase the polarization between countries, markets and classes.

The gap between developed and developing countries will widen further after the crisis caused by the COVID-19 pandemic. Within the developed countries, there is also a vaguely emerging gap between the US and Europe. In both the US and European societies, the scope of people's sufferings has clearly widened, while capital markets have benefited from accelerating expansion thanks to fiscal stimulus packages. What has worsened is not only the pandemic, but also the contrast between different groups of people.

We are glad that the world economy is rebounding and growing, but we hope this growth to be more ethical and clean. This kind of growth has at least two implications.

First, the cost of lives should be minimized. The open of economic activity should be based on a tangible improvement in the prevention of the pandemic, not act rashly just for the sake of growth. The virus is still raging in some European countries, while the US has also seen another rebound in coronavirus cases. It would be grossly immoral to deliberately lower the standard of the COVID-19 pandemic prevention in order to strive for economic growth.

Second, the principle of fairness must be taken into account. If all US citizens are vaccinated, while many developing countries do not even have access to vaccines for healthcare personnel at higher risk of infection, it would be a moral disaster and a disgrace to modern human civilization.

Fortunately, China has demonstrated strong capabilities against the epidemic, and developed its own vaccine. Thanks to that, we have witnessed not only an economic recovery by the end of last year ahead of the developed economies, but also economic growth that is full of internal momentum this year. China has struck the right balance between accelerating the pace of domestic vaccination and providing vaccines to developing countries in need.

This is the ethics that big countries should abide by. Having used "vaccine diplomacy" to attack China's assists to other countries, the Western elites have a mentality more than gloomy.

There are many uncertainties in 2021. The next winter in the northern hemisphere will prove whether and how much the vaccine can help prevent COVID-19. It also remains to be seen what the consequences of severe disparities in vaccination rates and economic resilience will bring to international relations.

China needs to speed up the production of vaccines, in a bid to shield people in the country by mass vaccination before winter and enable to support developing countries with more vaccines. We must achieve good results in both prevention and control and economic growth. And we should live up to the trust of developing countries in China.