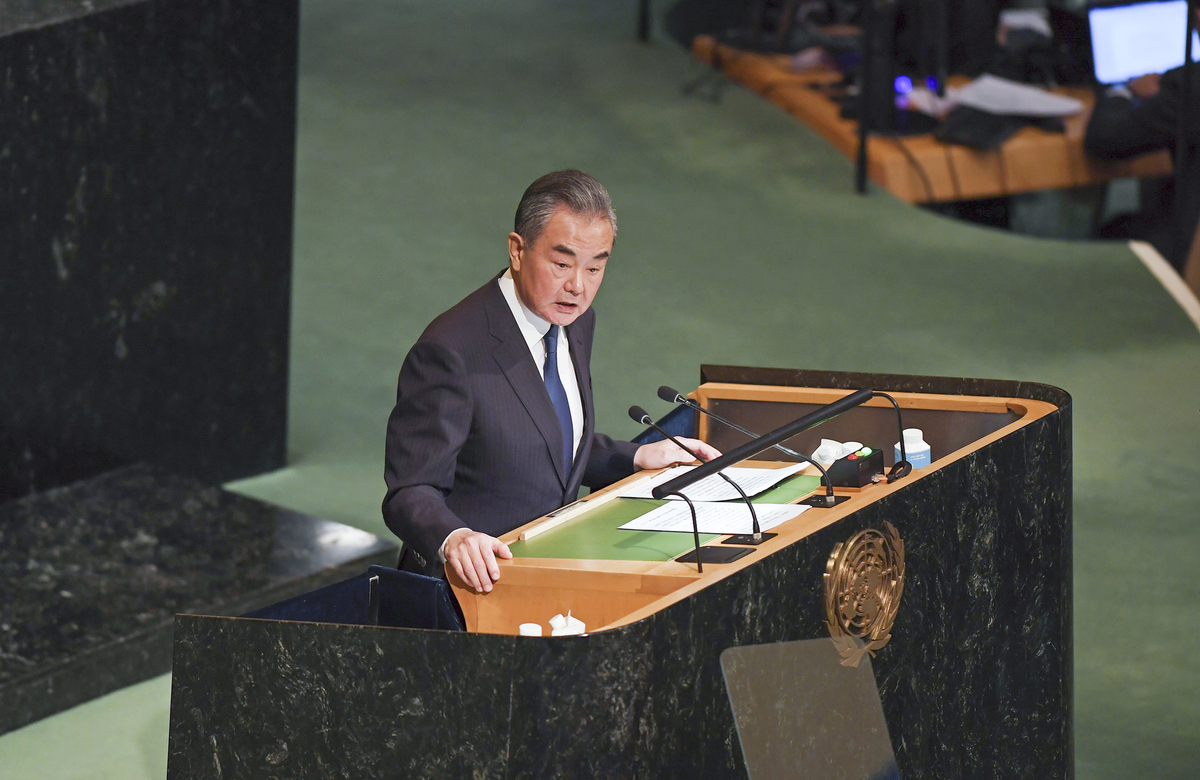 Chinese State Councilor and Foreign Minister Wang Yi speaks during the general debate of the 77th session of the UN General Assembly at the UN headquarters in New York on Sept 24, 2022. [Photo/Xinhua]

The more severe and complex the international situation becomes, the more urgent it is for countries to maintain communication and interaction. That the Chinese delegation was one of the busiest ones among all the delegations on the sidelines of the United Nations General Assembly in New York last week has demonstrated China's strong sense of responsibility as a major country.

The Chinese delegation, headed by State Councilor and Foreign Minister Wang Yi, participated in more than 40 bilateral and multilateral activities, some of which it organized.

In contrast to the fierce and divisive geopolitical games of the United States and its allies, China upholds multilateralism and a fair international order, so it is no surprise that the Chinese delegation's efforts to promote peace and shared development should be warmly received. At the general debate of the UN General Assembly, Wang put forward a six-point proposal on how China should respond to the call of the times, urging all countries to stand up for peace, development, openness, cooperation, unity and fairness rather than their opposites.

Three years ago, then US president Donald Trump declared in the UN General Assembly that the future does not belong to globalists, and openly questioned the authority of the UN. Last week, his successor Joe Biden called on countries to uphold the UN Charter. Yet his administration has repeatedly and openly failed to do that.

The common aspirations of all countries should not be hijacked by the selfish agenda of an individual country or a small clique. The international community as a whole should oppose the universal aspiration of all peoples for a better life being usurped by the narrow interests of the privileged few. The core issue of this era is neither the so-called duel between democracy and authoritarianism, nor the deliberately intensified bloc politics or ideological camp confrontation, but rather the question of whether or not countries are willing to work together for shared development and shared security.

China's Global Development Initiative and Global Security Initiative have resonated with so many countries because they are not based on serving the interests of any one country or a small group of countries but rather aimed at striking a balance. The reason why so many countries have expressed their support for Wang's proposals is that China has proved that its endeavors to build a community with a shared future for mankind are not a cause that it is just paying lip service to.

China has always been a builder of world peace, a contributor to global development, a defender of the international order, a provider of public goods and a mediator of hot issues.

Those making irresponsible remarks against China's "stance" in relation to the Ukraine crisis during the UN General Assembly are also those openly supporting the secessionists in Taiwan and Xinjiang. Is that just coincidence?