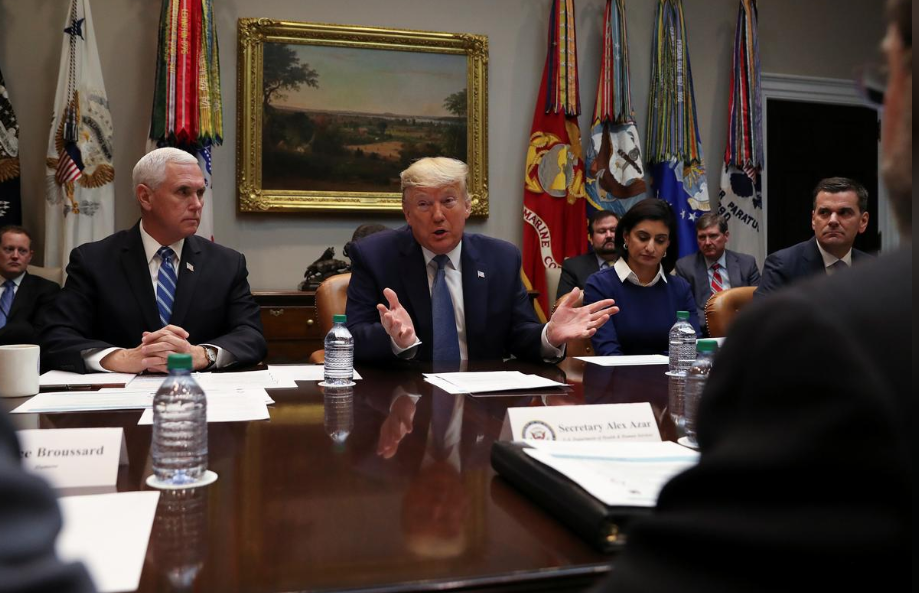 US President Donald Trump speaks next to Vice President Mike Pence during a coronavirus briefing with health insurers in the Roosevelt Room of the White House in Washington, US, on March 10, 2020. [Photo/Agencies]

Although the novel coronavirus outbreak has not suddenly become more severe the moment the World Health Organization declared it a global pandemic on Wednesday, the seriousness of the situation and the fact it has the potential to get a whole lot worse seems finally to have jolted the United States out of its complacency.

The US administration had been trying to downplay the situation, and it had seemed content with using the virus as a means to apply more pressure on China. Yet with evidence mounting that some deaths in the country that had been counted as flu fatalities were actually due to the coronavirus, its casual dismissal of the risks in favor of fueling the anti-China sentiment that pervades Washington has been met with a growing number of voices offering reality checks.

Anthony Fauci, director of the National Institute of Allergy and Infectious Disease of the US, said in testimony before the House Oversight and Reform Committee on Tuesday that the virus is "10 times more lethal than the seasonal flu".

While US Centers for Disease Control and Prevention Director Robert Redfield said that it was wrong to refer to the novel coronavirus as a "Chinese coronavirus", refuting a slew of GOP lawmakers who have sought to pin that label on the virus.

As such, the stark contrast between the fast increase of infections outside of China, including in the US, and the sharp decrease in the number of cases in China should awaken other countries to the dangers created by the China-bashing orchestrated by a handful of US politicians.

Rather than being a scapegoat, China is an example worth heeding. Not only for the effective pandemic-control path it has blazed for the world, which constitutes the main content of the WHO's advised measures, but also the spirit of mutual assistance that it has materialized into concrete foreign aid, transparent information sharing and tangible international cooperation.

Despite this, it is an odds-on certainty that the China-bashers in the US will continue to fling dirt at China by attributing the deaths from the virus in the US to China, while feeling no sense of guilt about the role they have played by diverting the world's attention from what needed to be done and wasting the window of opportunity that China had earned for united efforts.

According to epidemiologists, accurate testing is the single most effective method to counter the disease's spread, as it allows the authorities to trace the movement of the virus and isolate clusters of infections. The US has so far tested fewer than 6,000 people; the Republic of Korea is testing 10,000 a day.

That US politicians feel no qualms about putting their political schemes above global public health has served to expose how deeply they have fallen into the abyss of inhumanity. In seeking to derive gain from China's coronavirus woes, they have not only opened the doors of the US to the disease but also hindered the unity of purpose the world needs to treat the pandemic and its effects.