OPINIONS Global recession is not inevitable despite looming risks

Global recession is not inevitable despite looming risks 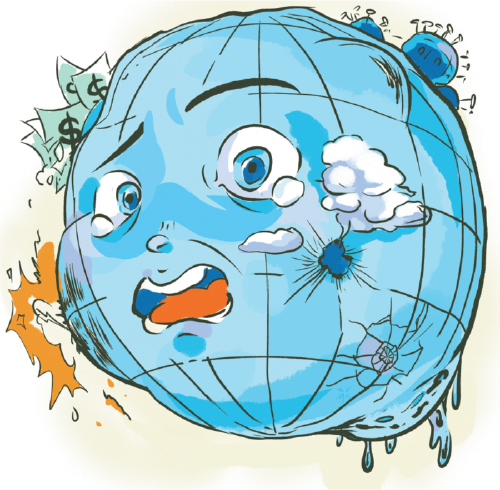 The global economy will narrowly avoid a recession. This is what we (at Oxford Economics) continue to believe, although the United States, Canada, and most European nations are likely to fall into recession at some point over the next year or so.

Avoidance of a global contraction despite several large economies slipping into recession is not necessarily an unusual outcome. Since the 1980s, there have been nine advanced economy recession clusters, but only five of those coincided with two or more consecutive quarterly declines in global per capita GDP — the benchmark for a global recession.

Global contraction can be avoided

It's worth noting that all five US technical recessions since 1980 have coincided with a global recession. But we expect the upcoming peak to trough fall in the US' GDP to be far smaller than in any of the previous five slumps. Therefore, it is reasonable to believe a global contraction could be avoided.

Although it wouldn't take much additional advanced economy weakness to mechanically push the world into recession, risks aren't solely tilted to the downside. In particular, a sharp drop in European energy prices and/or decisive action by governments to protect the economy from the energy shock could lead to milder recession in Europe.

Our recently revised forecasts assume that 14 of a sample of 25 advanced economies will slip into recession in late 2022 or early 2023. And while most of Europe, along with the US and Canada, will fall into recession, the Asia-Pacific will be the only region to escape two quarters or more of declining economic activity. Also, all the quarterly contractions in activity in the advanced economies will take place between the third quarter of this year and the second quarter of 2023.

Despite this broad-based weakness across the advanced economies, we don't think a global recession — defined as shrinking of global per capita GDP for more than two quarters — is inevitable. On balance, this view does not look inconsistent with historical experience.

During six of the stress periods, only 40-50 percent of advanced economies contracted for two consecutive quarters — a touch lower than the number of recessions we anticipate in late 2022-early 2023. During the Asian financial crisis, recessions were mostly experienced in Asian economies included in the advanced economy aggregate.

The average peak to trough falls in GDP during the global financial crisis and pandemic periods were substantially larger than in the remaining seven stress episodes. The Asian financial crisis also saw large decline in GDP, but these contractions occurred among a small group of economies. And at 1.6 percent, the dotcom bust stress period had the smallest average peak to trough decline in GDP.

As such, we assume the average recession size during the second half of 2022 and the first half of 2023 will be even smaller.

Advanced economy weakness doesn't always push the global economy into recession, for only five of the previous nine advanced economy stress periods have been associated with a global recession. Of those five, the global financial crisis and the pandemic were exceptionally large shocks, though.

The other three were in the earlier stages of our sample period when the advanced economies' share of world GDP was larger. Since the mid-1980s, the advanced economies' share of global GDP has fallen from more than 75 percent to around 57 percent. As a result, the dotcom, Asian financial and eurozone crises in the late 1990s and early 2000s didn't push the global economy into recession.

Given this and our assumption that the average GDP declines during the upcoming recession phase will be smaller, our baseline forecast, which assumes that a global recession will be narrowly avoided, seems reasonable.

When the US sneezes, world catches a cold

However, there is truth in the old adage that when the US sneezes the rest of the world catches a cold. During the four advanced economy stress periods that haven't been associated with a global recession, the US economy avoided a recession (based on the two consecutive quarterly falls in GDP definition, as opposed to the National Bureau of Economic Research methodology).

We have also excluded the recession in the first half of 2022 recession. By contrast, the other five advanced economy stress periods have all included the US falling into recession, and each of these episodes has coincided with a global recession.

This suggests our forecast for global economy avoiding recession may not be wrong. But it is worth noting that the expected peak to trough decline in the US' GDP in the first half of 2023 is much smaller than any of the preceding five recessions and well below the median US historical contraction.

The remaining G7 economies that are predicted to fall into recession are also expected to experience relatively small contractions. If the US and other advanced economies are set for particularly mild recessions, at least from the perspective of peak to trough GDP fall, this time around, then the global economy is more likely to avoid recession.

Upside and downside risks to the outlook

While we still don't see a global recession as the most likely outcome, it is fair to say that we expect world GDP growth in the first and second quarters of 2023 to be only just above population growth. If 2020 is excluded, this will mark the worst patch for the global economy since the global financial crisis.

What's more, it wouldn't take much additional bad news to push our global forecast into recession territory. But in the grand scheme of things, whether the global GDP growth is a bit above or a bit below population growth is not too important.

Nonetheless, as we've previously noted, a lack of major imbalances and vulnerabilities in the advanced economies most likely mean short and mild recessions. Economies should then begin to recover as the key drivers behind this year's economic slowdown, such as high inflation and supply chain bottlenecks, ease. But even if the peak to trough falls in GDP are small, the coming quarters could still prove pretty painful for many enterprises and households.

Given the recent string of bad economic news, it is tempting to focus solely on potential downside risks to our baseline view. Further bad news, more stubborn inflation, and poor management of the energy crisis in Europe could cause some economies to suffer longer and deeper contractions resulting in much greater pain for the real economy and financial markets, rather than the short and mild recessions we forecast.

However, there are substantial risks in both directions, especially for the European economies. Sky-high energy prices, uncertainty over future movements of energy prices, and concerns about possible gas rationing are taking a heavy toll on sentiment.

While building the infrastructure to end European economies' dependency on Russia will take time, governments' actions to cap energy prices and provide greater clarity on the medium-term outlook could limit the income and cost squeeze facing households and businesses. That in turn would bolster confidence and potentially result in milder downturns as Europe enters winter.

And if European governments take more substantive action to support the economy through the energy crisis, the chances of a global recession would be greatly reduced.

The author is director of Global Macro Research, Oxford Economics.