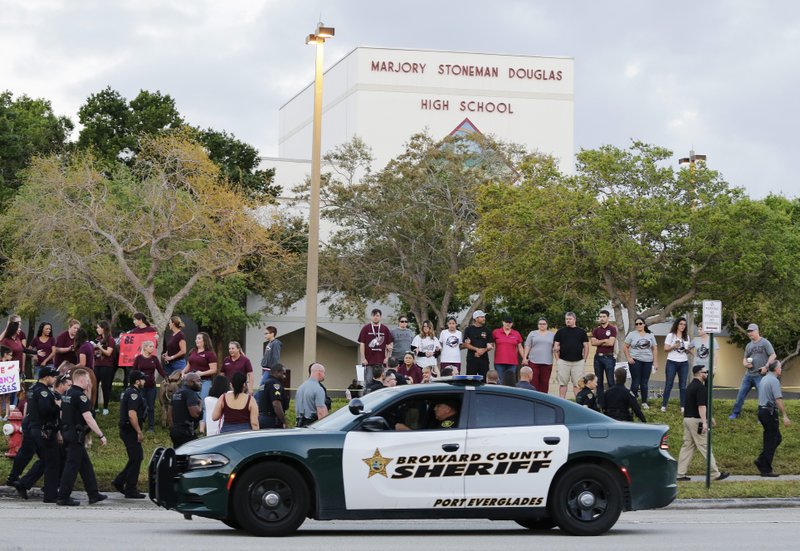 The United States is in the midst of a national debate over school security after the mass shooting at a Florida school.

To President Donald Trump and some gun supporters, the solution is to put more guns in the hands of trained school staff — including teachers — to “play defense” against a rampaging gunman.

The rest of the world has different strategies to deal with violence around schools. But the U.S. appears to be the only place in the world where some want to arm teachers to the degree the president wants.

Rather, emergency drills, armed guards patrolling school campuses and intruder drills seem to be more of the norm.

Education Ministry spokesman Amos Shavit said “the vast majority of schools have armed security guards” and those that don’t are supposed to have heavy locks and security systems.

Visitors to the school are questioned by the guard, who checks their bags and sometimes uses a hand-held metal detector. Entry is strictly forbidden to anyone without authorization, Shavit said.

That’s augmented by municipal security units that work in conjunction with police. “If there is an incident at a school they will be there in a minute or less,” Shavit said.

He said the small number of teachers who have a legal gun license and usually carry a weapon can do so as well in school, but that this is not policy or encouraged. “Teachers here aren’t supposed to be carrying weapons in classrooms, teachers are supposed to teach,” he said.

Violent incidents have been rare in Russian schools, but two attacks last month attracted nationwide attention and drew comparisons to the school violence in the U.S.

In one, a teenager armed with an ax attacked fellow students at a school in southern Siberia, wounding five children and a teacher. In another attack in the Urals city of Perm, two teenagers stabbed children and their teacher with knives, wounding 15 people. They then attempted to kill each other, but were detained.

Now, there are security guards at Russian schools.

In the wake of deadly terror attacks in Paris and Nice, France introduced new security guidelines at schools when children went back to classes in September 2016.

The measures, which remain in place, include a tighter screening of people entering schools, which can include bag checks, and improved coordination with police.

Police officers patrol in school areas, while parents and students are requested to avoid gathering near schools and report any suspicious behavior or object. French schools also hold three security drills a year, including one in which an alleged assailant enters their premises. Students are taught how to hide or to escape.

All students aged 13 to 14 and class representatives also get basic training on life-saving measures. In pre-school and kindergarten, for toddlers aged 2 to 6, children are taught to hide and keep quiet through games.

Attacks on schools are rare in Japan, where there have been a handful of knifings, but guns are practically non-existent. Security measures at Japanese schools became compulsory only after a June 2001 attack at an Osaka elementary school, where eight children were stabbed to death and 15 others were injured by an intruder who was later sentenced to death and executed.

Japanese schools generally do not allow outsiders to freely walk into schools without getting permission at the gate, which is usually closed during school hours. Parents or other visitors must wear a pass to go in. Schools are also required to have an emergency manual in case of crime or accident at school or while children are walking to or from school. Some schools have set up security cameras, or teachers sometimes take turns patrolling during breaks or lunchtime.

Parents or neighborhood volunteers usually stand along designated commuting routes or intersections to watch kids as they walk to and from school. Children usually carry handheld alarms attached to their school bags that they can use in an emergency while they are on the road. Schools, PTA and students set up commuting routes and draw safety maps.

Rome has been spared any terrorism-related attacks, but international schools in Italy’s capital have been deemed “soft targets” for several years and receive extra security.

Several have army jeeps with machine-gun toting soldiers standing guard. The measures are similar for embassies as well as popular outdoor gathering spots, such as the Campo dei Fiori market in Rome’s historic center. The increased security is more a response to Islamic terrorism fears than mentally unstable people getting hold of weapons.

There have been no visible signs of increased security at public schools.

“In my country, teachers teach. They don’t open fire,” Matteo Salvini, who heads the right-wing League party, said recently in response to questions about his views on the Trump administration.

The Swedish National Agency for Education has issued a pamphlet for schools with general advice about what to do in case of an armed attack, including locking a door or barricading oneself, evacuating the premises and seeking shelter. The brochure says the guidelines are general because school buildings can vary.

There were no changes in security ordered after a 2015 attack on a school in the industrial town of Trollhattan, in which three people were killed by a masked sword-wielding man who eventually was shot and killed by police. An investigation found that the attack was racially motivated; the school was located in a neighborhood with a large immigrant population.

There is no armed security in Polish schools, which have not experienced any mass attacks.

In most schools, visitors need to ring in to be admitted. Janitors at the doors are supposed to ask what brings them to the school.

The main concerns are drug dealers and also truancy.

Kindergartens are locked, mainly to prevent kids from wandering into the street or someone other than the parent picking up a child without written permission.

Mexico’s ongoing drug war has driven schools in Baja California, Monterrey, Ciudad Juarez and some other cities to hold emergency drills to instruct teachers and students what to do in case of gunfire that sometimes breaks out outside schools during drug cartel shootouts.

Students are usually advised to drop to the floor, seek cover behind walls, remain calm and crawl to safety.

Nigeria’s president has ordered security forces to defend all schools in “liberated areas” of the country’s northeast to avoid further mass abductions from schools by Boko Haram extremists.

The order follows last month’s kidnapping of 110 girls at a school in Dapchi town, and requires leaders of police and civil defense forces to coordinate with the military and the governors of Borno, Yobe and Adamawa states.

Shettima Kullima, executive chairman of the Universal Basic Education Board in northern Nigeria’s Borno state, ruled out guns even in schools where soldiers serve as teachers and said students should be trained to be aware of security threats.

Students would find armed teachers “highly distractive and disorienting” and could associate teachers with fear, said Yusuf Tom, a teacher in Maiduguri. Better to have private security guards frisking people at the entrances of schools plus metal detectors, he said.

According to data from UNICEF and the Borno state government, about 1,397 schools have been destroyed in the state by Boko Haram extremists and 2,295 teachers killed since 2009.

In Yobe state, where the latest mass abduction occurred, the government has said it is deploying armed security personnel to schools in remote locations.