OPINIONS Global trade at risk from Trump in 2018

Global trade at risk from Trump in 2018

By Robert A. Manning | Global Times 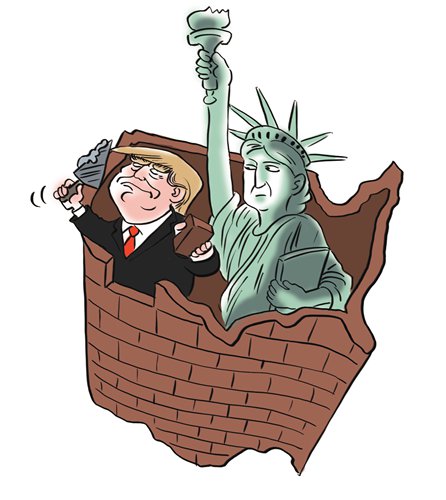 More uncertainty looms over the future of the global trading system than at any time since it was created after World War II. With decisions likely on the future of the North America Free Trade Agreement (NAFTA), the United States-Korea Free Trade Agreement (KORUS FTA), the fate of the now Japan-led Trans-Pacific Partnership (TPP), and not least the future of the World Trade Organization (WTO), 2018 is likely to see a disruption of the global trade regime US President Donald Trump so harshly condemns.There are structural and technological challenges, and an anti-globalization backlash in the West. The recent WTO ministerial meeting in Argentina ended indecisively on December 13. But the biggest new factor, the wild card, is Trump's sharp reversal of the historic US role. Since it helped shape the General Agreement on Tariffs and Trade (GATT), the WTO's predecessor, in 1948, setting the rules for trade, the US has led every round of trade liberalization. Trump rode into office on his fury at trade and all trade deals as "disasters," the all-purpose cause of middle-class malaise, denouncing NAFTA, rejecting the TPP, WTO and the KORUS FTA. He withdrew immediately from TPP, viewed as a pillar of US Asia strategy, then forced renegotiations of NAFTA and KORUS FTA. To be fair, Trump has a point: Public opinion in the US mistakenly blames trade for many of its woes. Moreover, updating trade accords to address rules for new technologies like digital commerce, the environment and other new factors is not unreasonable. The WTO has not completed a new round of global trade liberalization in two decades: The Doha round is dead. And the WTO is not well-equipped to address issues raised by the rapid rise of emerging economies, most dramatically China, now the world's No.1 trading power. Few dispute the WTO needs reform.But Trump's zero-sum view of trade defies economics. Although he calls for "reciprocal free and fair trade," his only measure is whether the US has a bilateral deficit. Trade deals are designed to open market access for trading partners' respective goods and services, not guarantee outcomes, surpluses or deficits. By that measure, fair trade is an impossible standard. I have a deficit with my grocer, but I have food for dinner: a fair exchange. A nation's savings and investment, whether it consumes more than it produces, determines deficits. Trump's speech to Asia-Pacific Economic Cooperation CEOs in Vietnam was close to a declaration of war on the global trade system, including denouncing the WTO as "unfair," although the US has filed the most cases, more than 100, and won most. He rejected multilateral accords, saying the US would only negotiate bilateral agreements. "We will no longer enter into large agreements that tie our hands, surrender our sovereignty…"The sovereignty term is a reference to the WTO and multilateral accords generally. Trump is crippling the WTO dispute settlement mechanism by blocking two judges and not appointing US judges. While there is widespread feeling that the WTO needs reform, Europeans complain that the US has not offered any specific criticisms or solutions. Cecilia Malmstrom, the EU top trade official, said in an interview that she feared the US risked "killing the WTO from the inside." But Robert Lighthizer, the top US trade official, praised the recent WTO Ministerial Conference, saying that it "will be remembered as the moment when the impasse at the WTO was broken, implying that the US wants to mend, not end the WTO." He added, "Many members recognized that the WTO must pursue a fresh start in key areas so that like-minded WTO members and their constituents are not held back by the few members that are not ready to act." Nonetheless, Trump is gearing up to act unilaterally, and the US is likely to impose trade sanctions on China charging dumping overcapacity in steel and aluminum, and also impose penalties on intellectual property violations. These are likely in 2018 and could spark a trade war.In addition, the fate of NAFTA may soon be decided. Trump has made demands that it be renegotiated every five years, ending its dispute settlement mechanism and changing the rules for automobiles. Mexico and Canada reject all three. No major auto companies back Trump's proposed changes that would disrupt global supply chains. Similarly, Seoul is concerned that the KORUS agreement may be at risk.If Trump moves forward with unilateral trade sanctions, a trade war is likely to ensue: one where there will be few winners and the world could move toward beggar-thy-neighbor protectionism of the kind last seen in the 1930s.The US, which accounts for only 13 percent of world trade, could find itself isolated. The rest of the world is moving on. The EU is concluding trade pacts with Canada and Japan and pursuing additional trade deals. A revised TPP involving the 11 remaining countries is expected to be finalized in 2018, and China is leading negotiations on the Regional Comprehensive Economic Partnership. Ironically the net effect, if Trump acts on his blustery views, may be that the US trade deficit will grow and US exporters will face increased discrimination as the US will not be party to all the new trade liberalization arrangements.