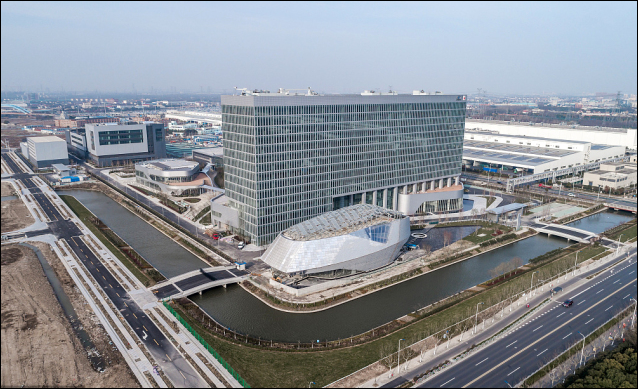 Photo shows a factory in Shanghai that builds vehicles of General Motors. The plant is a joint venture between General Motors and China's SAIC Motor. (Photo: VCG)

"A thunderclap in a clear sky" is a Chinese way of describing people feeling shocked when they hear something unexpected. The announcement by General Motors (GM) a month ago that it will shut down five of its North American plants and lay off up to 14,000 workers is obviously a gigantic thunderclap to the

people likely to be affected by the move.

Trade conflicts don't seem to have played much of a role in GM's decision. Almost all GM vehicles sold in China are built in China, so the cars coming off the American production lines aren't subject to the retaliatory tariffs that China levied this year on American auto imports in response to US President Donald Trump's tariffs against China. And over 90 percent of the steel that GM consumes in the United States is purchased from domestic suppliers, so President Trump's steel and aluminum tariffs may have only had a limited impact on the company's production costs.

There is no reason why GM should abandon its commitment at home. After all, it was American taxpayers’ money that helped bail the company out when it faced bankruptcy a decade ago. In fact, GM has created 17,600 jobs for American workers over the past four years by investing 6.6 billion US dollars in its domestic operations.

The factory shutdowns are a purely commercial decision. To put it simply, the cars produced at those factories are not selling well in the domestic market. One of the plants set to close is in Ohio. It manufactures the Chevrolet Cruze, a compact vehicle that was once a sign of GM's recovery from the brink of bankruptcy. In the first nine months of this year, however, domestic sales of the Cruze tumbled 26.5 percent compared to last year. Sales of another three sedans – the Chevrolet Impala, Cadillac CT6, and Buick LaCrosse – all fell by more than 10 percent during the same period, and all of them are made at GM's Detroit-Hamtramck plant, another factory which is being shut down.

It seems GM is trying to adapt to the reality that American car buyers are shifting from compact vehicles and sedans to crossovers and SUVs. Data from the London-based auto consulting firm JATO shows that in the first half of 2018, SUV sales rose 13 percent in the United States, while sedan sales slumped by 10 percent.

China is GM's largest market. It sold nearly 836,000 vehicles in China in the third quarter of this year, compared to less than 695,000 in the United States. Unfortunately, some of the models that are not doing well in GM's home market also have weakening sales in China: As of October, this year's sales of the Cruze and the Buick LaCrosse each dropped by over 27 percent, which shows the two models’ performance in China is worsening faster than they are in the home market.

The auto markets in China and the United States share some similarities. Like American consumers, Chinese buyers have a growing preference for larger vehicles. As auto sales in China cooled this year because of its saturated market, the SUV was the only category of vehicle to see an uptick in sales in the first 10 months. Sedan sales, by comparison, slid more than 10 percent in the same period. The market share of economical small cars in China plunged from 35 percent in 2003 to 6.7 percent in 2017. Auto companies that fail to adapt to this trend face the painful choice of continuing to lose market share, or exit the world's largest auto market. In September, Japan's Suzuki Motors, known for its small cars, chose the latter when it transferred its 50 percent stake in its last remaining joint venture in China to its partner Chongqing Changan Automobile. Only about 105,000 Suzuki cars were sold in China last year, after sales tumbled by 29 percent in a year. Suzuki's joint venture in China lasted for a quarter of a century, which has echoes of the auto maker's exit in 2012 from the American market after three decades.

In addition to consumers' shift to larger vehicles, GM is pointing to the future of electric vehicles (EV) as another important factor behind its North American restructure. EV is one field where GM, at least for now, may find it easier to get things done in China than at home. At a time when the Trump administration is looking to end the Obama era subsidies for EVs, Beijing is using policy tools to try to boost EV sales so they account for at least 1 out of every 10 vehicles on China's roads by 2020. Young people living in major cities in China such as Beijing have a very limited chance to obtain new license plates for gasoline-powered cars because of government restrictions that aim to curb air pollution and congestion. EV plates are much more accessible, and therefore a better option for people hoping to fulfill their dreams of owning a car. Sales of EVs, including fully electric vehicles and plug-in hybrids, expanded 68 percent in China in the first eleven months of 2018. Against the backdrop of China's government cutting subsidies for EVs, this strong growth shows there is a huge demand for these vehicles.

At this point, GM seems to have no plan to restructure its operations in China. But considering the reasons why the company is restructuring its North American business, I believe it's only a matter of time before it starts to take similar steps in China. In order to keep its foothold in China, it has to be flexible. But our focus shouldn't be on how many GM jobs China might lose in the future. As it stands, GM plans to roll out 10 EV models in China by 2020, and 20 models by 2023. This means new jobs in design, production, and sales.

Instead, we should ask whether China has a pool of talent large enough to sustain the EV ambitions of GM and other auto companies. Many of the 14,000 workers GM is laying off in North America are experts on internal combustion engines. The painful reality is that their skills are less and less in demand. To make an EV you need people who can engineer batteries and write software. Many experts on gasoline-powered cars could be retrained with the skills the EV industry needs. But this will take time and money. In 2015, there were about 170,000 qualified EV workers in China, according to a report released by China's government last year. That report estimates that China will need 850,000 such workers by 2020, and 1.2 million by 2025. Government, auto companies, and educational institutions have a lot of work to do to prevent a possible talent deficit.

It's interesting to note that one model GM will stop building as part of its North American restructure is the Chevrolet Volt, a plug-in hybrid once hailed as "a car of the future". When it was unveiled in 2010, there was a lack of charging infrastructure across the US and Canada, so one of the car's major selling points was that owners could go electric without compromising on range: The car's electric range covers short journeys; for longer journeys, it automatically switches to its gasoline engine. But GM's customer data shows that Volt users are using the gasoline engine much less now that the number of public charging stations has grown. In the first nine months of 2018, sales of the Volt in the United States fell nearly 16 percent. By rolling back investment in plug-in hybrids, GM obviously wants to inject more resources into developing fully electric vehicles. As GM CEO Mary Barra said earlier this year, "we see an all-electric future".

In China, most of the EV models that major international automakers like GM, Ford, Volkswagen, and Toyota have so far offered, or will introduce soon, are plug-in hybrids. Fully electric models, excluding the high-end Tesla, are mostly from domestic brands such as BYD. In the first eleven months of 2018, sales of plug-in hybrids surged 82.5 percent, compared to the 30.3 percent growth in sales of fully electric vehicles. In the short term, plug-in hybrids, which claimed around 14 percent of China's EV market in 2017, will defend their market share from encroachment by fully electric counterparts. But people should bear in mind that China plans to build around five million EV charging points by 2020, which is roughly the same as the number of EVs expected to be on China’s roads by then. The story of Volt tells us that, as battery range and the availability of charging infrastructure increases, consumers will become more comfortable with all-electric cars. Plug-in hybrids represent a transitional stage. At the end of the day, they will probably give way to fully electric vehicles in China's market.

As auto companies look for ways to better prepare for their future in China's market, GM's current restructuring efforts offer guidance on some of the dos and don'ts.