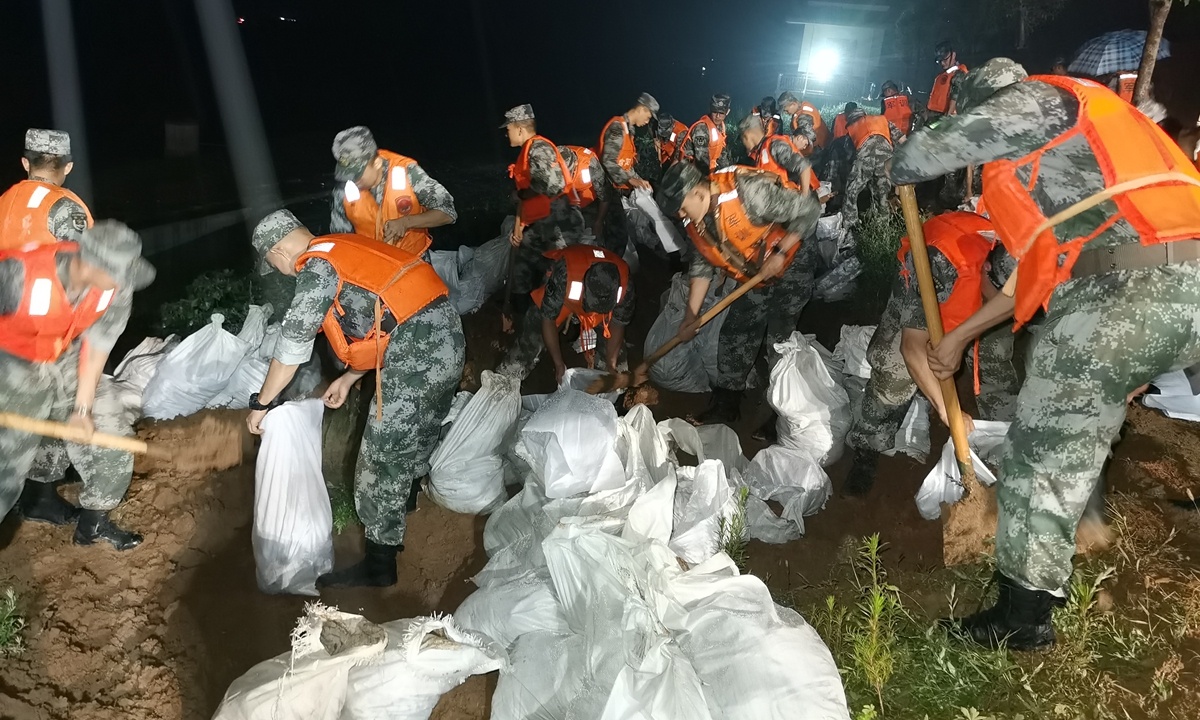 Due to climate change, the intensity and frequency of extreme weather events are now on the rise. Central China's Henan Province is suffering from heavy rainfall. Some Western countries, including Germany and Belgium, have also seen severe floods this past week. The US and Canada are witnessing hellish wildfires. Extreme weather events have become human beings' common challenges. A country's governance model and its ability to launch social organization will be put to the test in the face of extreme weather.

"China's first strength is its 'whole nation system.' As long as the government mobilizes, it will soon get the response of departments at all levels," Yu Shaoxiang, chief research fellow with the National Institute of Social Development at Chinese Academy of Social Sciences, told Global Times on Thursday.

"The Chinese concept of collectivism has also played a very important part in it," said Yu. Chinese people have always had a selfless spirit of sacrificing individual interests for the public good. Chinese people advocate that personal interests are subordinate to the interests of society and the country. Every time a natural disaster happens, there is mutual assistance among people. When disaster strikes, help comes from all sides.

In the face of the heavy rainfall in Henan, China has responded promptly. The People's Liberation Army and People's Armed Police Force were quickly mobilized and deployed to the most dangerous areas. Measures, including flood diversions, were adopted in time to effectively reduce some disaster risks. This ability to mobilize and immediately respond is largely due to the advantages of China's political system.

But in the US, federal aid only comes after a request from state governments. If the state government didn't ask the federal government for help, the latter is not allowed to send any rescue personnel to give a helping hand. In addition, due to political party struggles in the US, there are often debates before taking actions. These can delay the optimal timing for rescue operations.

Western countries emphasize individualism and liberalism. They are individual-centered and care less about collective interests. This being the case, during the COVID-19 pandemic some even refused to wear face masks, the basic measure to protect oneself. This does not bode well for their countries' response to public emergency.

Fan Peng, a research fellow at the Chinese Academy of Social Sciences' Institute of Political Sciences, noted that China has a political advantage in dealing with extreme weather. It has a high degree of flexibility in its arrangements for responding to emergencies due to its central-local governmental structures.

When there is a crisis, we need to make quick decisions and break down barriers. By virtue of the advantages in its system, the CPC is able to make the state apparatus and the national governance system more integrated.

In addition, while maintaining the power of the central government, China also gives great flexibility to local governments. This ensures efficient decision-making and coordination in the event of a major crisis. This also ensures that the central government can mobilize cross-regional, cross-tiered and cross-system resources in the first place. It embodies the full combination of centralism and democracy, flexibility and the rule of law. To deal with disasters requires a fully thorough system that all parties can coordinate with. China has its own advantages in this regard.