Governance woes behind US trade war

For now, there is still no end in sight to the brewing trade war between the world's two economic heavy hitters. Ignoring voices of objection at home, the Donald Trump administration announced that the second tranche of tariffs on $16 billion in Chinese goods will take effect later this month. Though Trump has yet to fulfill his campaign promise to levy a 45-percent tax on Chinese goods, his logic on trade policy refuses to change. 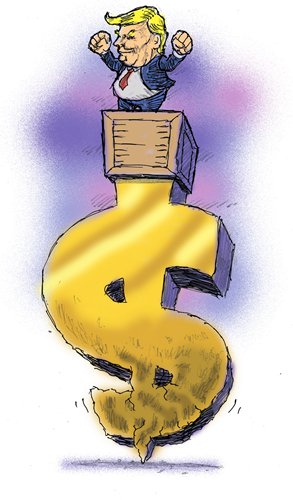 The reason why the US has provoked and intensified the trade war lies in the incapacity of the global system. Specifically, division of labor in the globalized era has led to the exodus of the US manufacturing industry out of the country. Meanwhile, the US claims that China's "predatory" economy has developed itself into the biggest beneficiary in the system.

That's why the Trump administration insists on attacking China's "stealing" practice in the name of "safeguarding US national interests," regardless of the cost of torpedoing the existing international order.

The robust stock market and economic growth of the US as well as the decline in unemployment have further boosted Trump's confidence in escalating the trade war. His trade policy has gained more acceptance among Americans. However, the logic behind his trade war can hardly hold water.

The era of globalization has been an inevitable development of human society. As people in the global village are more interconnected, trans-regional flow of finance, technology, information, service and talent has re-optimized global production resources, inspiring the development of countries and regions.

The unprecedented development of productivity and international division of labor has prompted developed countries which boast capital and technology advantages to transfer their low-end industries to other countries where labor and land costs are relatively low. Then a great many multinationals have mushroomed, which has objectively precipitated the growth of developing countries.

Economic liberalism has become a paragon of democracy with which developed nations dwell upon with relish. It's also an important pillar for the postwar international order. When developed countries sat on the top of the industrial chain to reap benefits, they never complained about the unfairness of the system but instead became its most powerful defender.

Ironically, the US - the founder of the global system - has now become its most proactive opponent. The Trump administration attacks the "unfair" global system and views China as being complicit in bringing about the fall of the US manufacturing industry and loss of jobs. Such rhetoric has led people to believe that the stature of the US has fallen to a third world country's.

Globalization is not without problem. Apple is a paradigm of a globalized industrial chain, but it's not a nice story. Developing countries at the low end of the industrial chain can only get disproportionally meager profits while lucrative gains flow to developed nations. In this way, the US deficit is far less than the book figures.

More severely, low-end manufacturing has worsened the environment, putting the health of the public in jeopardy. But the US-led developed world just passed the buck.

Emerging economies like China are resigned to be just a factory of developed countries, so they work hard to develop hi-tech and produce high-value-added products to create a level-playing field with developed countries. This is the law of market economy, which, however, has become a threat to its national security and an enemy of its economy in the view of the US.

The strange logic can hardly justify itself.

Denying others a share of the spoils is not the essence of the era of globalization. If developed countries think there's something wrong with the global system, they can appeal to international organizations to carry out reform, instead of resorting to short-sighted practices like threatening with tariffs.

Trump's trade war actually stems from domestic conundrums notably industrial hollowing-out and loss of everyday jobs. The problems are not a result of globalization but of domestic mismanagement. It seems that forcing jobs back home will create jobs, but it can't last long because it will fail to stimulate the fundamental driving force of industrial development. If Trump can make more efforts at boosting the real economy instead of waging a trade war, he may get closer to "Make America Great Again."