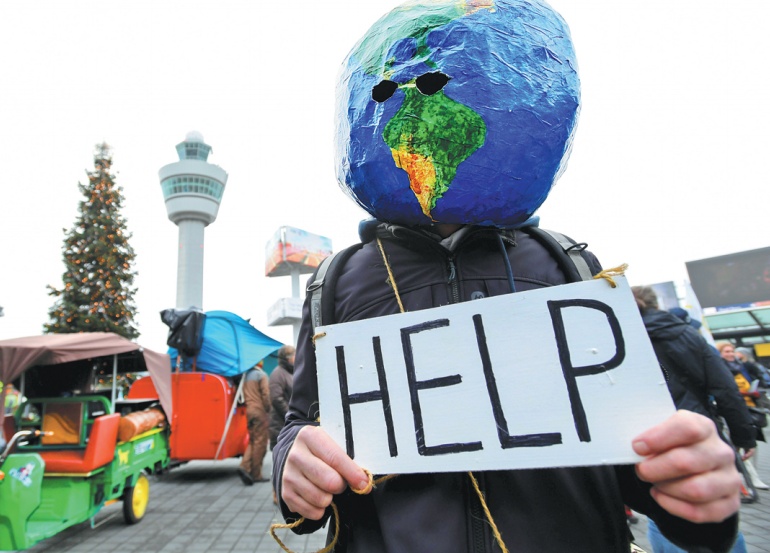 A protester makes a point at a Greenpeace climate demonstration at Amsterdam Airport Schiphol in the Netherlands on Saturday. (Photo: Agenceis)

Recurring meteorological disasters keep reminding us of the devastating effects of climate change, which are too grim to be overlooked.

Since the effects of climate change don't differentiate among countries based on their ideological differences, social norms or economic systems, countries need to work together to reach a consensus on a framework of action, including international treaties, policy initiatives and periodic targets, to fight climate change.

But unfortunately, the global coordination and governance framework for initiatives to fight climate change are teetering on the brink. From Kyoto in 1997 and Copenhagen in 2009 to Paris in 2015 and Madrid in 2019, the annual climate change conferences have raised hopes only to end in disappointment.

However, meaningful actions to combat climate change are always easier said than done, as even agreeing to a clear definition of the diverse effects of climate change remain a difficult task. Indeed, when taking specific climate mitigation initiatives such as participating in carbon trading, or seeking carbon capture and storage, it is difficult to define actions complicated as they are by pricing, technological development and national interests.

Yet the distribution of climate burden among countries is not merely a trade-off but a shared responsibility based on rules.

Seemingly, the color green has become the most expensive and difficult to sustain. Yet as a journalist from China, one of the world's fastest growing economies and largest emitters, I seek ways to not only make our planet livable but also greener and more sustainable.

The first task is to make sense of environmentally friendly social and economic development. If the "green task" is about exchanging the dream of higher living standards for a healthier environment, sustainability of economic growth becomes a big question mark, especially for developing countries. I wish green projects would generate higher financial returns in the long run.

Contrary to popular belief, empirical studies show eco-friendly development is more sustainable in the long run. It is important to emphasize that a green economy first produces green value, in real economic terms, to generate monetary returns, and only then does it occupy a moral high ground.

It is also important to stress the significance of green finance. In today's world, a real economy cannot be isolated from the virtual economy. Finance, though virtual in a way, not only acts as a catalyst to economic development, but also has become an integral part of social development. Without complex financial systems, a green economy cannot thrive.

Fortunately, the financial markets' mechanisms that boost general economic growth also promote green industrial growth. For instance, in the waste-to-energy sector, the initial public offerings have provided the much-needed financing for related industries. Private equity firms are also involved in continuous financing and corporate restructuring activities to realize the value embedded in different green industries. Obviously, the technology-and capital-intensive nature of a green economy requires a sound arrangement from industrial and financial perspectives. Virtual is real in this sense.

Moreover, green finance is not a one-off activity, but an ongoing process. Take China for example. It has not only made solid progress in terms of environmental protection, but also made green development one of its five strategic missions.

China is a signatory to various international accords on climate change, including the Paris Agreement, and has been taking measures to ensure its industrial and financial sectors, and infrastructure projects are conducive to green development. It has also issued green bonds and elevated green project finance to a whole new level, while guaranteeing that its green finance initiatives are market-oriented and rules-based.

And, green development will yield the desired results, just as green finance does.

The author is director of the Economic News Department of China News Service.