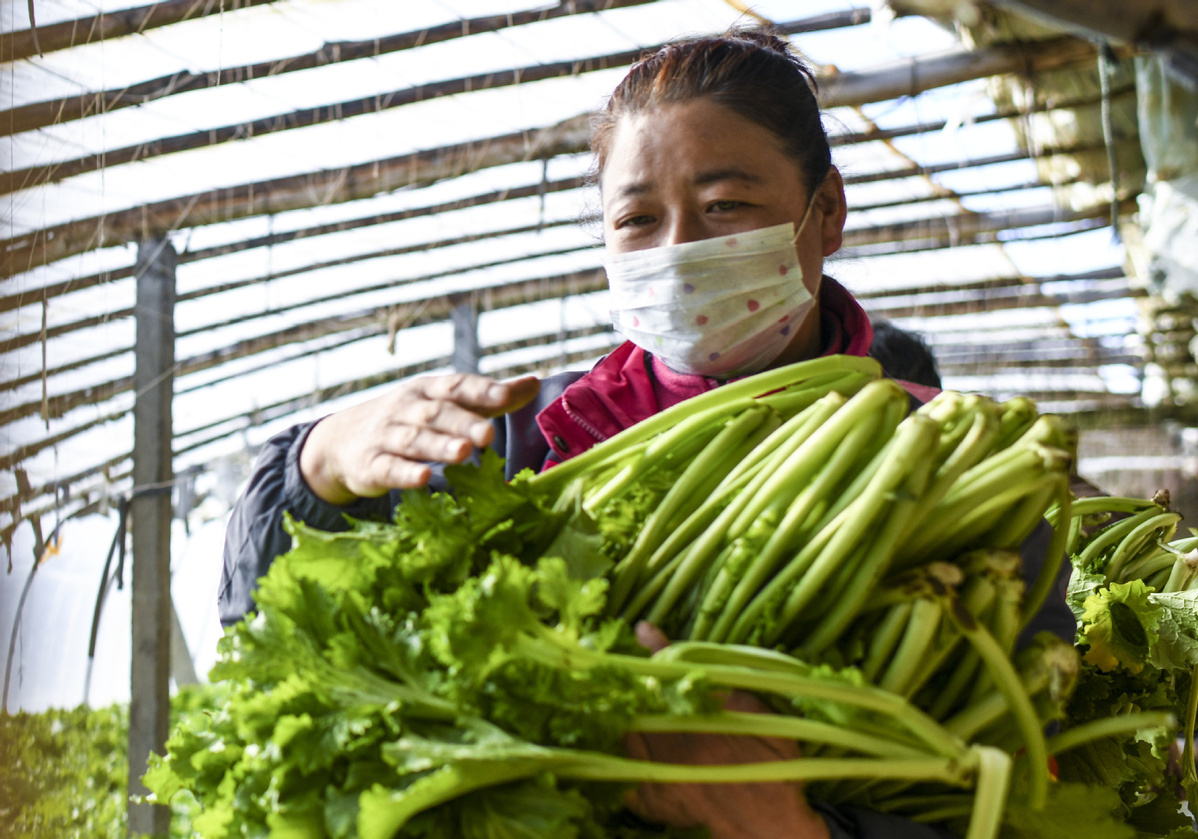 A woman colletcs vegetables in Zhatan village in Urumqi, capital city of the Xinjiang Uygur autonomous region, on Feb 29, 2020. [Photo/Xinhua]

Why do some politicians of the United States always label what China has done against terrorism, extremism and separatism in its Xinjiang Uygur autonomous region suppression of ethnic groups? What is even more puzzling is their turning a blind eye and deaf ear to what the country has achieved in its fight against terrorism there.

It is because of their deep-rooted bias against China as a "one-Party-ruled" country and a communist one in particular. For them, it is politically correct to point accusing fingers at such a country no matter whether their accusations are fact-based or absolutely groundless.

From "internment camps" to "forced labor", Xinjiang's Uygurs are resources they can now use to make accusations against China. Some US lawmakers on Wednesday called for a bans on imports from China's Xinjiang on the grounds that the use of "forced labor" is widespread on farms and factories there. A senior senator on Tuesday accused US companies of willfully ignoring "horrific" forced labor conditions in Xinjiang, and urged the US Commerce Department to stop US companies from buying goods produced there.

Do they have evidence for what they claim? No, they read reports by some Western media or reports by some think tanks, which are based on hearsay or on the interviews given by some Uygurs, who are themselves separatists or strongly support Xinjiang's secession from its motherland.

Will a diehard terrorist call himself or herself a terrorist or admit what he or she is doing is an act of terrorism? Of course not.

The same is true of Uygurs harboring strong secessionist sentiments. They will always consider what the Chinese government has done to rid some Uygurs of secessionist ideas and to train them as skilled laborers as brainwashing. They will always prefer to label those Uygurs who have chosen to retreat from secessionist activities and lead a normal life by landing a job as forced labor.

Some US politicians choose to believe in the lies or fabricated facts because of their preexisting bias against China. Compared with what the US has done in its fight against terrorism worldwide, China is doing a great job in its Xinjiang.

US lawmakers should compare their own country's wars against terrorism with China's efforts in the same regard. How many innocent people have lost their lives in the US' anti-terror wars in the countries it has sent its troops to? How many US soldiers have lost their lives in Iraq and Afghanistan? What has the US left behind in both Iraq and Afghanistan?

With the Chinese government's efforts, Xinjiang has not seen a single terrorist attack in more than three years. With vocational training, many Uygurs have landed jobs and lead a much happier life than before. US lawmakers need to give up their bias and face the reality.