OPINIONS GT Voice: US economy to pay for graduation trip by 'god of stocks of Capitol Hill'

GT Voice: US economy to pay for graduation trip by 'god of stocks of Capitol Hill' 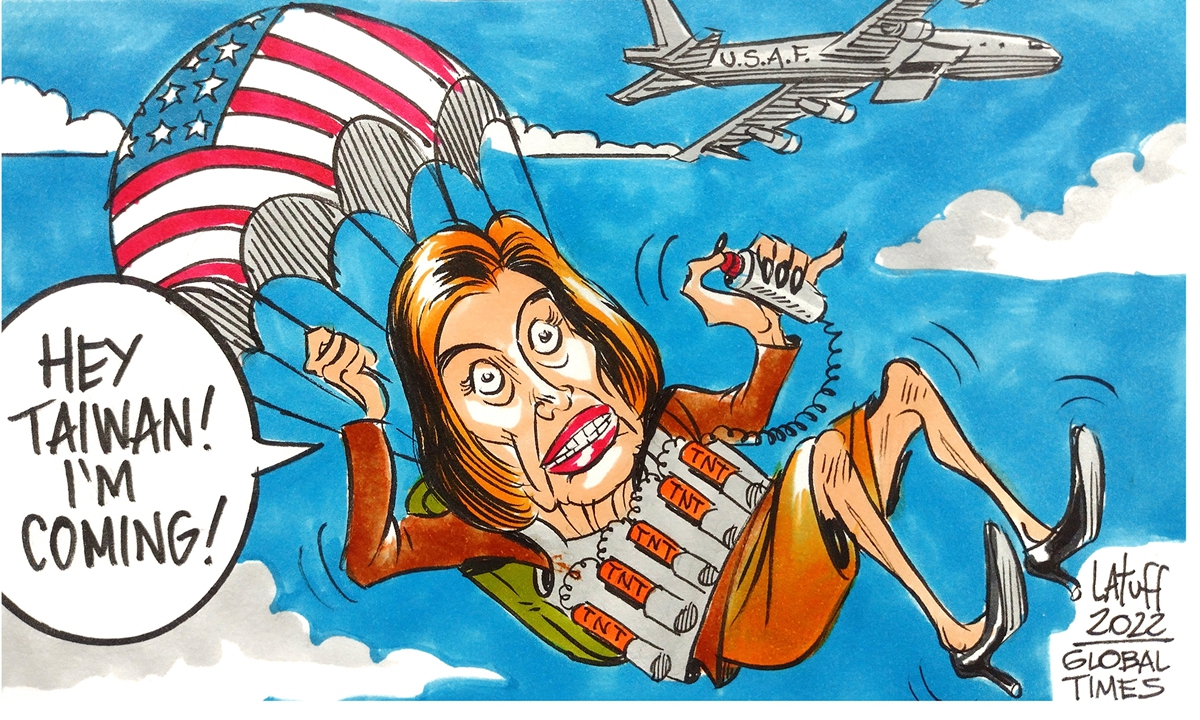 Shortly before she started what seems to be a "graduation trip" to Asia before stepping down as widely expected, US House Speaker Nancy Pelosi was embroiled in a scandal over her husband's purchase of chip stocks ahead of the passage of a chip subsidy bill at the US Congress, with some accusing her family of cashing in on her job and others mockingly calling her the "god of stocks of Capitol Hill."

With her provocative visit to the island of Taiwan, Pelosi appeared to be cashing in on her leadership job again and the US economy will pay for it in the long run - not just in terms of taxpayers' money for her military transportation and extra security expanses, but actually in terms of disruptions to the massive shared economic interests between China and the US.

The trip - merely to satisfy Pelosi's own vanity - has undoubtedly delivered another serious blow to already declining mutual trust between China and the US, which in turn will have serious wide-ranging implications for bilateral ties, including in economic fields.

In fact, signs of the trip's impact on bilateral economic cooperation have already emerged.

China's leading electric-vehicle battery maker Contemporary Amperex Technology Co (CATL) decided to put on hold plans to announce a multibillion-dollar plant in North America due to concerns over the escalated tensions between the world's two largest economies after Pelosi's visit to the island of Taiwan provoked China's core interests, several US media outlets reported on Wednesday.

It is conceivable that the Chinese and American business communities will be even more cautious about investment in the current political climate. Bilateral ties have already plunged to historical lows thanks to Washington's relentless, reckless crackdowns against China, which have already been weighing on bilateral economic exchanges. And markets fear, understandably so, that Pelosi's visit will further disrupt bilateral exchanges and cooperation.

From China's perspective, the US is no longer to be trusted on major commitments, not as much as it used to anyway. Indeed, it would be surprising if China has not prepared for the worst, including in economic and financial areas.

With the start of major military drills around the Taiwan island, the mainland has actually started or accelerated the process of reunification, which the US cannot stop. That means China is, in effect, prepared for US intervention. One can only imagine what China will do to eliminate potential risks, including its massive holdings of US treasuries.

China is the second-largest foreign holder of US treasuries, only after Japan. China's holdings of US treasury securities dropped to $980.8 billion in May, falling below $1 trillion for the first time in 12 years, according to data released by the US Department of the Treasury. The further deterioration of China-US relations will likely have a direct impact on China's risk appetite for holding US treasuries, and reducing holding of US treasuries could become a precautionary option.

That could deal another blow to the global standing of the US dollar - the real backbone of the US economy - which is already losing popularity as Washington constantly weaponizes the currency to crack down on other countries.

The Russia-Ukraine conflict has already dealt a severe blow to the credibility of the dollar. Now an escalation in China-US tensions could further weaken the dollar's status if China cuts its holding of US treasuries. In this sense, in the long run, Pelosi's graduation trip will eventually come back to bite the US economy in a way that will exhaust the dollar's credibility.