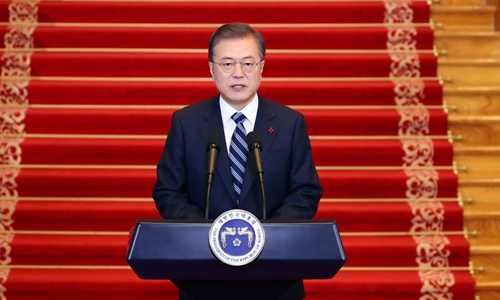 South Korean President Moon Jae-in laid out his administration's policy direction in 2020 on Tuesday in a televised New Year's address at the Blue House in Seoul. He said, "I hope South and North Korea can make efforts together so that the conditions for Chairman Kim Jong-un's reciprocal visit can be arranged at an early date." Such a statement has drawn widespread attention.

In the context of "no further progress in inter-Korean cooperation" and stalled US-North Korea talks in 2019, Moon expressed his willingness to improve relations with North Korea and expect a dialogue between the two countries.

Moon proposed the idea of "common security of 80 million [Korean] people" and some measures to break the diplomatic logjam, such as fielding a unified Korean team for the Olympics in Tokyo in July, making joint efforts with the North to host the 2032 Olympics, upgrading inter-Korean border cooperation, reopening the Kaesong industrial park and restarting tours to the Kumgangsan resort, and making a joint bid with North Korea for co-registering the Demilitarized Zone as a UNESCO World Heritage site.

These ideas and proposals show Moon's good intentions toward Pyongyang and his hopes of improving bilateral relations. However, whether inter-Korea ties would develop in line with Moon's expectations may not mainly depend on Seoul.

North Korea has been unhappy with the South, as some deals reached by leaders of the two countries haven't been implemented, so current inter-Korean relations have also stalled.

It may not be easy for Pyongyang to understand why Seoul always worries about being sanctioned and closely follows Washington's lead. South Korea is a country that is highly dependent on other economies; therefore, it has to consider the consequences of economic cooperation with the North.

The role Seoul played as a bridge between Pyongyang and Washington in 2018 has rapidly waned. North Korea is pursuing a policy of "engaging with the US while shunning the South," namely cutting off almost all communication channels with the South and seeking to directly negotiate with the US in an attempt to realize some of its claims.

At the beginning of 2020, both the regional and international situations are in a state of fermentation. Against the backdrop of deteriorating US-Iran ties, the situation on the Korean Peninsula has become the focus of the international community as well.

North Korea is seen as an isolated and closed country. But actually, it has a fairly accurate judgment of the international situation. Pyongyang would adjust its policy according to the changes in US-Iran ties and the situation in the Middle East. The current US moves in the Middle East are likely to affect the resolution of the Korean Peninsula nuclear issue.

Iran and North Korea are labeled as "threats" and "rogue states" by the US. The US moves on Iran and Tehran's subsequent responses may affect Pyongyang's views and actions regarding denuclearization, which may exacerbate tensions on the peninsula. Relations between the US and North Korea are asymmetric. Improving ties with the US, getting sanctions lifted by the UN and other countries, and fully developing its own economy have almost been the major focus of North Korea.

From the US perspective, whether President Donald Trump can win this year's election primarily rests on domestic factors, especially economy and politics. Diplomacy would be a minor one. Even among US diplomatic topics, the Korean Penisula nuclear issue is only one for many, rather than a priority or a crucial one. Amid heightened US-Iran tensions, the priority of the Korean Peninsula issue has declined significantly, while the risk has risen. Therefore, the peninsula issue in 2020 may get increasingly complicated compared to 2019.

Moon also said in the address, "The South Korea-US alliance will be strengthened." As the core pillar of Seoul's security, the alliance remains stable so far.

It cannot be denied that there are some divergences in fields such as military cost-sharing between the two countries. Yet these issues would not fundamentally shake the US-South Korea alliance, but only affect the national sentiment toward Washington among South Koreans.

Generally, when regional tensions tend to rise, the demand for US security protection from the South Korean public and political circles would increase significantly. While the situation eases, dependence on the US would decrease.

It has to be admitted that there are some challenges in the US-South Korea alliance. On the one hand, Seoul hopes to rely on Washington, but on the other, South Korea does not want to be dragged into conflicts by the US. Although Seoul is considering joining the International Maritime Security Construct led by Washington in connection with the safe navigation of ships near the Strait of Hormuz, it is very cautious. South Korea needs to strike a balance between US protection and the essential cost it has to pay.