OPINIONS Gun ownership, deaths out of control in US

Gun ownership, deaths out of control in US 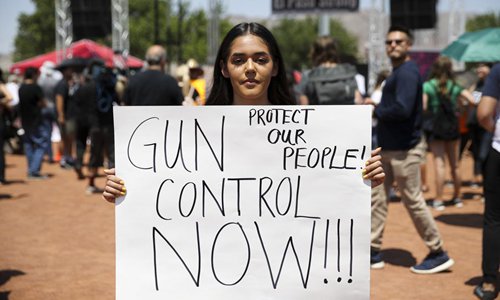 College student Jennifer Estrada takes part in a rally for gun control and anti-racism, in El Paso, Texas, the US, on August 7, 2019. Two mass shootings took place hours apart over the weekend in the US, leaving at least 31 people dead. (Photo: Xinhua)

In 2019, the US saw more mass killings - four or more people in one incident - than any year. A total 41 incidents and 211 deaths were recorded this year. Excluding suicides, gun deaths reached 14,800. Whether defined as a human rights issue or a public safety issue, mass shootings are shocking in a US allegedly governed by law.

The right to bear arms is enshrined by the US Constitution. No official statistics are on record counting how many guns there are among the US people, but the number is generally estimated to be hundreds of millions. Who own these guns? Are certain people prepared to use them as murder weapons? These issues have not been tracked or supervised effectively. Various criminal motives exist in American society. From the perspective of gun murders, the US is beset with crises.

Private gun ownership is a tradition from the early days at the founding of the US. In a modern society, the problems created by this tradition have already exceeded the benefits. Crime is one of the increasingly prominent modern diseases in several societies in the 21st century, and the spread of guns enables crime to unleash greater killing energy.

American society has already seen serious problems caused by the private ownership of guns, but their massive number has contributed to an enormous inertia. Many interest groups have benefited from it and some ordinary people have truly gained a sense of safety. To change this habit which has lasted hundreds of years, tremendous political courage and a rearrangement of interests is required.

Facts have proved that the US system is unable to handle the intricacies of countless issues around guns including politics, economics, law and order and public psychology. The country can neither manage the safe storage and use of so many guns owned by ordinary people, nor can it establish a new national system that bans or strictly restricts guns. It cannot even form an overwhelming opinion regarding gun issues.

Politically, the US is in fact letting gun issues go unchecked. It is a matter of probability for the country whether anyone will use a gun to vent personal grievances and take revenge on society. For individuals, it is also a matter of luck whether he or she will encounter a shooting.

US gun policies are laissez-faire. Those who lost their loved ones or who are scared of shootings are helpless. They have no way to request their country solve this problem. Everyone must accept the risk that a shooting may occur at any time anywhere.

This is the US, the most powerful Western country with unique global soft power and discourse power. The US reinforces the impression that shootings, including the one in Las Vegas on October 1, 2017 in which 59 people died, are the price a democratic country must pay and should not be viewed as a serious governance flaw.

Massacres and shootings should be deemed a serious violation of human rights. In the world's most modern society, people's lives are threatened by unregulated guns. Isn't this the most severe human rights flaw? The US acts as the world's guard but turns a blind eye to its own human rights defects. People are forced to get used to a US where both modern and barbarous elements entangle in a weird way.