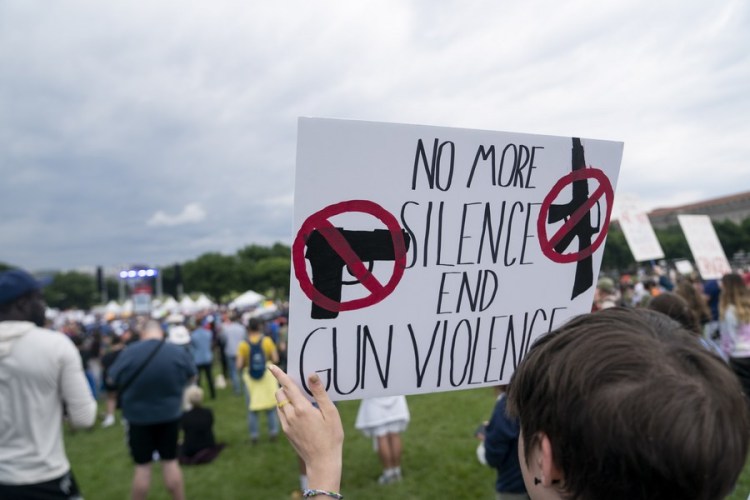 The fact that nearly every US citizen will know at least one victim of gun violence in their lifetime and more than 1 million US citizens have been shot in the past decade presents a horrifying picture about how firearms in private hands pose a threat to people's safety in the United States.

What is even more shocking and alarming is the fact that firearm-related deaths increased 13.5 percent from 2019 to 2020, and among children and adolescents they surged a staggering 30 percent. Statistics show that 12 children die from gun violence each day in the United States and another 32 are injured.

It is no exaggeration to call gun violence an epidemic in the US. Mass shootings at schools have already become a nightmare that haunts US children and their parents. Children are even required to receive training about how to react to a mass shooting in Texas which has the highest rate of school shootings.

Despite US President Joe Biden's repeated remarks and efforts to push for a ban on high-capacity ammunition magazines, enforce universal background checks for all gun sales and eliminate gun manufacturers' immunity from lawsuits, it seems very unlikely the world's most developed country will be able to address its gun violence. It is unlikely to be even able to effectively stop the rapid rise of mass shootings in schools and other public venues.

It is the intrinsic flaw in its governance system that makes it impossible for the US government to place the interests of the American people first despite the fact that its politicians hold high the banner of freedom and democracy when talking about the political strengths of the US.

Bipartisan strife characterizes US politics. And behind the two major political parties are interest groups, including gun manufacturers and dealers, which have been making handsome profits. The National Rifle Association is their lobbyist to Congress. It has received tens of millions of dollars from the gun companies to ensure the defeat of responsible gun ownership regulations.

No matter how sincere Biden and other politicians are when they talk about the need to address gun violence, they can do nothing more than pay lip service to the settlement of the problem.

Talking about measures to reduce or stop gun violence is one thing, doing something concrete is another. This has become a reality that Americans living under the shadow of gun violence have to accept.

The fact that gun sales jump immediately after every mass shooting suggests that gun violence has become a vicious cycle in the US — the more frequent mass shootings are, the more necessary and urgent Americans feel the need to possess firearm of their own to protect themselves from being shot.

There would be no solution to gun violence in the US unless its political institution is fundamentally reformed, which seems impossible in the foreseeable future.