OPINIONS Has US learned its lessons from post-9/11 wars? 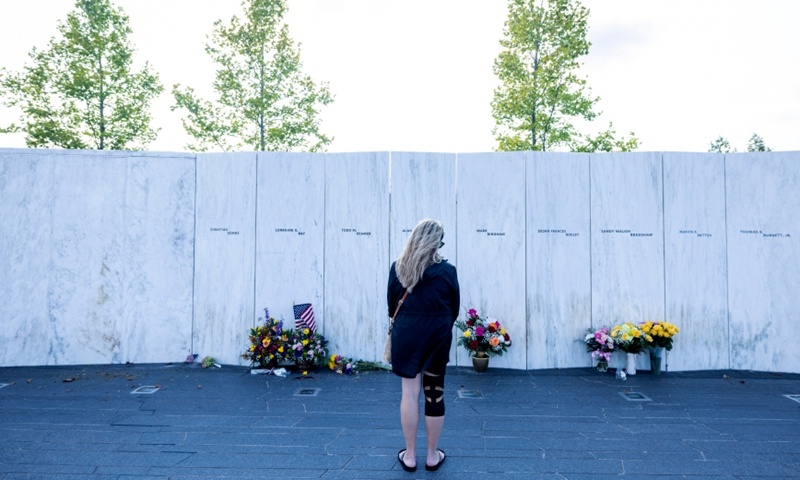 It has been 20 years after the world was shocked to see two planes struck the Twin Towers of the World Trade Center in New York on September 11, 2001. It was a chaotic scene featuring fire and heavy smoke, the screaming and scattered crowds and people who were dumfounded by the fact that the US - a superpower - was attacked by terrorists on its ground.

This year's commemoration of September 11 is different as the US just ended the war in Afghanistan and the Afghan Taliban - after being overturned by the US three months after 9/11 in 2001 - has taken over Afghanistan, again.

The past few weeks have seen the Western media making rolling reports to mourn victims of the terror attacks and some reflecting on the failures of the US domestic and diplomatic policies in the past two decades.

However, the fierce criticism and the apparent failures of the past two decades have not awakened the US political elites. They refused to learn. And soon they will be looking for a new enemy in a new region, but even bigger failures await them, observers said. 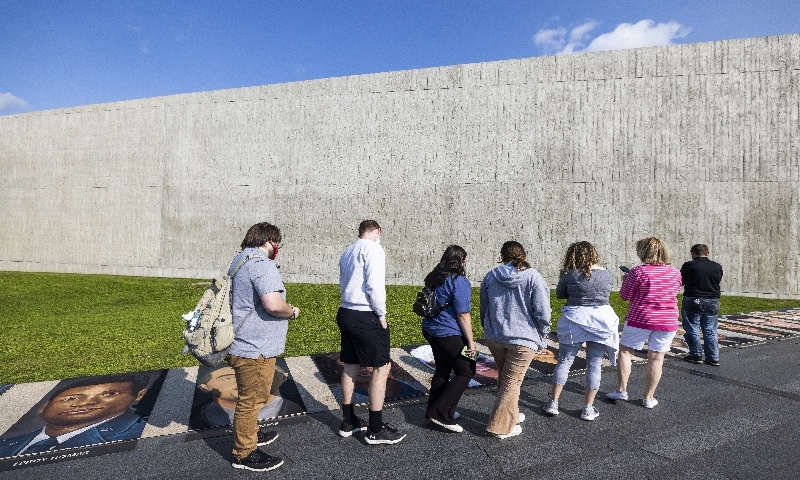 The US President Joe Biden, heavily criticized for his hasty and disorganized withdrawal from Afghanistan from all fronts, may attempt to use the 20th anniversary of the September 11 to shift the public attention. According to the schedule released by the White House, Biden and his wife are scheduled to visit all three 9/11 memorial sites -- ground zero in New York City, the Pentagon and the memorial outside Shanksville, Pennsylvania, where United Flight 93 was forced down -- on Saturday.

But nearly 1,800 people, including survivors of 9/11 and family members of the victims, are signing a joint letter asking Biden to not attend the memorial activities if he does not declassify documents related to the terror attacks.

Brett Eagleson was among them. His father Bruce Eagleson, who was on the 17th floor of the South Tower of the WTC, died in the collapse of the building, leaving his family unable to recover his remains even through DNA analysis. After luckily surviving when the planes hit the building, he chose to stay and assist more people to evacuate and was last seen going upstairs to retrieve a walkie-talkie to assist in communication between firefighters and the police.

Sorrow and bitterness have engulfed the better part of the last two decades of Brett's life, but it's mostly anger that stands out. The US government's investigation into the 9/11 attacks has been shrouded in secrecy with detailed reports on one of the most shocking terrorist attacks having never been disclosed.

Brett Eagleson said those 20 years have changed his perception of the US government. "We have seen our government block its own citizens from truth and justice for its own selfish interests and to grow its relationship with Saudi Arabia, and as time goes on, we get further and further away from the truth."

Finally gathering up the courage to visit Ground Zero, the World Trade Center site in Lower Manhattan to see the changes in the place 20 years after it was hit by two planes, Mrs Tsou, a 50-year-old Chinese-American living in New York, remained calm but after seeing the smiling Muslim girls with headscarves painted on the fence not far from the square, she sighed with emotion.

"For the past 20 years, the American people have not seen much of the US counter-terrorism measures in Afghanistan and Iraq, but the fear of and discrimination against Muslims and people of color has grown within the US," she told the Global Times.

Tsou was a software engineer who worked in the north Tower of the WTC. The vacation on September 11 two decades ago saved her life, but more than 30 of her colleagues were wounded or killed in the attack. Tsou quit her job after the 9/11 attacks and has been doing odd jobs at home since then. Rarely has she left the house or have any contact with her former colleagues.

"War is always intertwined with too much self-interest, and 20 years later, the truth about the attacks remains unanswered, and the American people have not been given the answer for 'why do they hate us,' but our government has created more conflict and hate in America and all around the world," Tsou said. 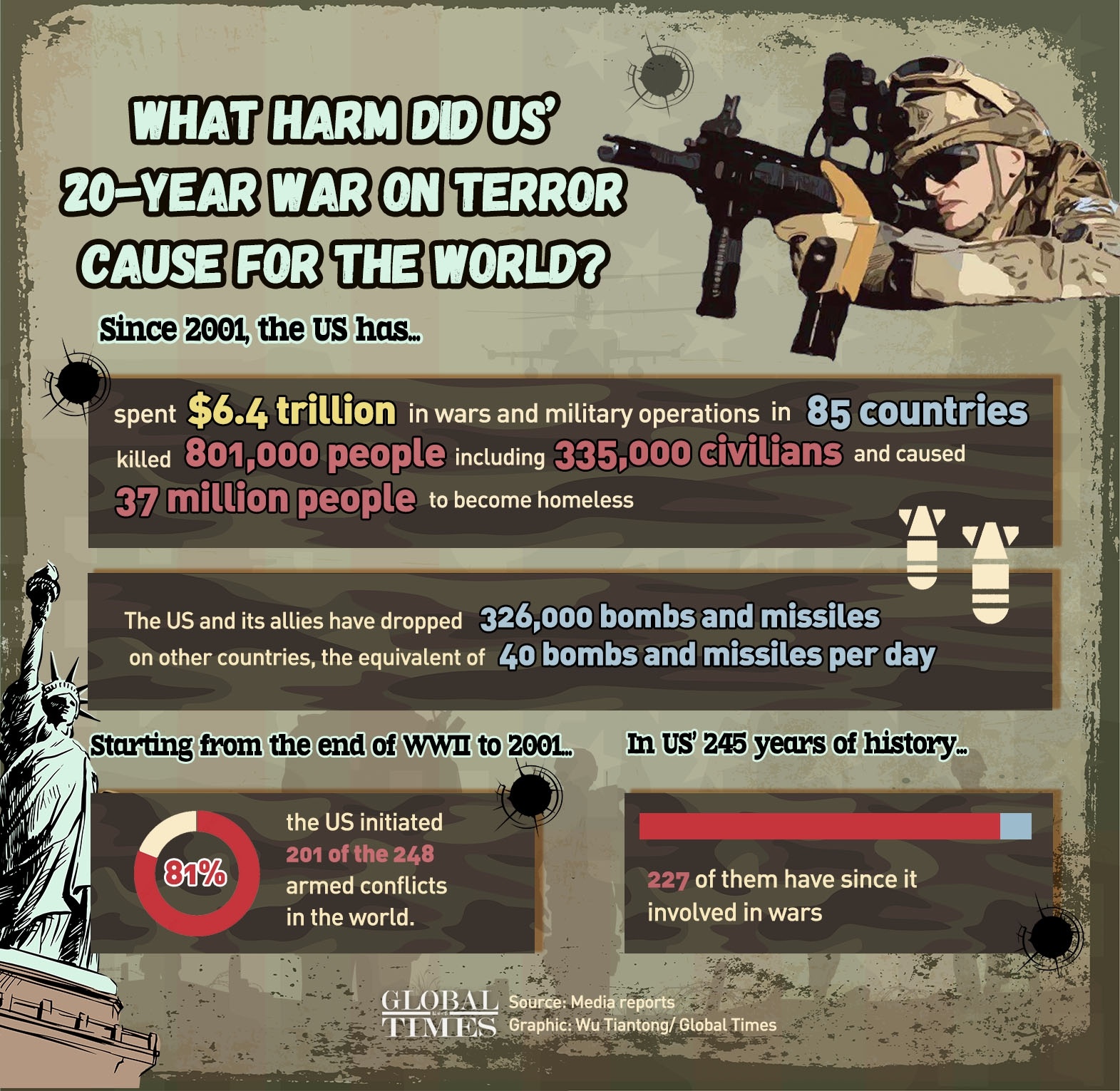 Like Tsou, a lot of Americans are wondering why the US failed and whether the money and the American lives sacrificed in the war on terror in Afghanistan were worth it. But for many outside the US, the question remains how the world and the US were changed by 9/11.

Harvard University scholar Joseph S. Nye Jr. told the Global Times that "future historians will regard September 11, 2001 as important as Pearl Harbor was on December 7,1941."

In the 2000 presidential election, George W. Bush advocated a humble foreign policy and warned against the temptations of nation-building, but after the shock of 9/11, he declared a "Global War on Terror" and invaded both Afghanistan and Iraq, the professor said.

"While the 9/11 attacks killed several thousand Americans, the 'endless wars' that the US launched as part of the global war on terror cost much more," he said.

According to data from the Brown University Costs of War project, over 929,000 people have died in the post-9/11 wars due to direct war violence, and several times as many due to the reverberating effects of war. 38 million people became war refugees and displaced persons. The US is also conducting counterterror activities in 85 countries and the federal price tag for the post-9/11 wars is over 8 trillion.

All this money and lives invested in the post 9/11 wars under the banner of countering terrorism have not stopped terrorism from spreading globally. It has only caused more confrontations between different civilizations.

The rhetoric of the war on terror generated a geopolitical binary that divided the world into the uncivilized and civilized. Islam was posited as the enemy and the symbol of "the uncivilized world." Many Muslim populations -- including innocent civilians -- were viewed as "suspect communities" targeted under the rubric of counterterrorism, Stefanie Kam, associate research fellow from the International Center for Political Violence and Terrorism Research (ICPVTR) S. Rajaratnam School of International Studies, told the Global Times via an email.

The old conventional "war on terror" approaches to terrorism - militarized counterterrorism response -- focused on short-term gains, rather than long-term gains attuned to the political realities and the social and historical forces on the ground, which was what largely defined the failure of US' approach to terrorism, Kam said.

Kam thought that the political vacuum engendered in a post-US Afghanistan has the potential to complicate the security landscape by creating breathing space for terrorist groups to consolidate in Afghanistan, and to inspire a wave of foreign fighters -- seeking militant training -- into Afghanistan. Apart from Islamic extremism, the rise of right-wing extremism is an emerging area of concern for governments in Asia.

"In particular, the Southeast Asian region has seen a recent growth in terrorist attacks by ISIS-inspired, self-radicalized individuals, and the involvement of women, youth and family networks in militancy," Kam said.

Echoing Kam, global experts have expressed concerns over the spread of terrorism over the past two decades. The fact that the number of terrorist groups in Afghanistan had grown from less than 10 to more than 20 during the US military occupation also indicates the irony of Bush's words when starting the war.

"Our war on terror begins with al-Qaeda, but it does not end there," former US President George W Bush told Congress days after the attacks, on September 20, 2001. "It will not end until every terrorist group of global reach has been found, stopped and defeated."

For Adnan Akfirat, China Representative of the Patriotic Party (Turkey),it is the US that made an obscure concept of "international terrorism" to justify its occupations and military actions in Afghanistan, Iraq, Libya and Syria and "cover up its imperialist aggression."

The US is not fighting against terrorism but using terrorist groups in different regions to play its geopolitical tactics, Akfirat noted.

"With the liberation of Afghanistan, the US had to admit that the 'Crusade' it launched since 2001 ended in disappointment and disgrace only 20 years later," Akfirat said, noting that all these failures could not wake up "the US ruling clique" who still thinks US "will subdue the peoples of the world with its terrible military power. Their class interests compel them to continue this madness."

Yasir Habib Khan, founder and president of the Institute of International Relations and Media Research in Pakistan, thought that lop-sided war on terror architected by America "is the epitome of complete failure" and it is ironic to see the war under the banner of peace and stability prompted more wars and gave rise to "white supremacy" to which Americans' lives are subjected to be more insecure and vulnerable.

In the eyes of some Chinese experts, the US debacles for the past 20 years also resulted in wrong policies and miscalculations as the US political elites failed to solve domestic problems on social polarization, rising economic disparities and other issues. Instead, the country focused on scrambling for power and playing geopolitical tactics in suppressing other countries.

The US' strength and international reputation have been damaged for the past 20 years. Putting huge resources into military actions or "rebuilding" other countries has worsened the overall crisis domestically, including deteriorating political polarization and struggles, the flooding of popularism and racism, confrontations of different classes and people's losing of recognition of national identity, Li Haidong, a professor at the Institute of International Relations of the China Foreign Affairs University, told the Global Times.

However, despite all these problems awaiting to be solved, the US hasn't changed its tactic of seeking enemies to ensure its global status and define its international policies. The US should have coordinated the international community to counter terrorism and extremism after 9/11, but it took unilateral military actions in Afghanistan, Iraq, Libya, and Syria for geopolitical purposes, causing ever-lasting regional chaos, experts said.

After all these years, one would think the US has learned its lesson and can now embark on a journey of solving domestic issues and shifting the focus of its policies. Unfortunately, that's not the case, the country has its eyes on a new "enemy" - China.

Khan said that 20 years after the September 11, the US should have built a broad-based global mechanism to promote counter-terrorism modalities and it should have snubbed impulsive of protectionism but unfortunately it did nothing. "It did not learn from the past. This makes the future of the world remain volatile."