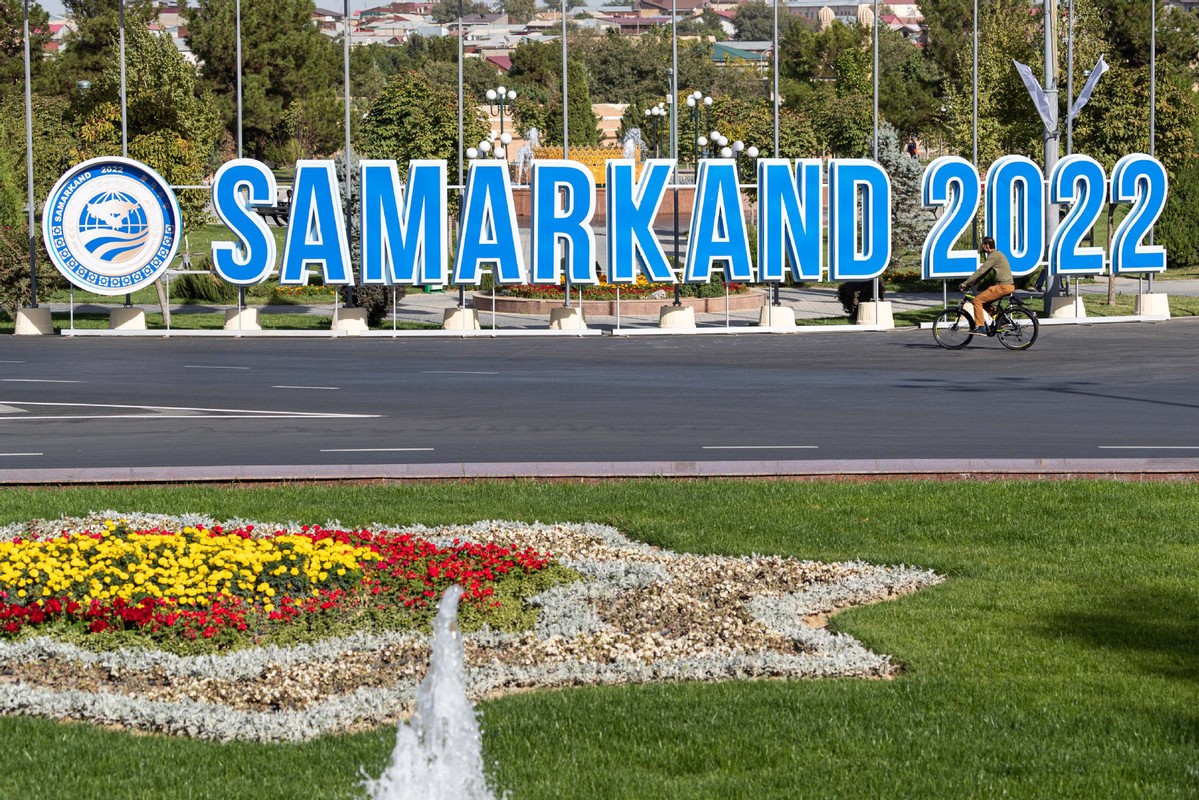 A cyclist passes a sign for the 22nd meeting of the Council of Heads of State of the SCO in Samarkand. [Photo/Xinhua]

The rise of the Republic of Uzbekistan is likely to be a "game changer" in the 21st century, especially because the visionary Uzbek leadership under President Shavkat Mirziyoyev has already garnered much praise.

Mirziyoyev has been playing a key role in helping integrate different countries' policies in many fields and proposing projects of alignment and cooperation among states in order to build a better world, and the just concluded 22nd annual summit of the Shanghai Cooperation Organization's heads of state is an apt example of that. The summit held in Samarkand, Uzbekistan, was witness to exciting activities including bilateral meetings on the sidelines.

Samarkand used to be an important trading center on the ancient Silk Road, and it served as the center of inter-civilizational dialogue and cultural exchanges.

Notably, despite the pandemic and other challenges facing the region and the world, Uzbekistan successfully held the important regional summit which was attended by many heads of state and government. This has further increased the geo-economic and geopolitical importance of Uzbekistan.

The effective policies and constitutional reforms implemented by the Mirziyoyev administration have made significant contributions to fostering peace and development in the Eurasian region. The Uzbek government's unique conduct of statecraft, diplomacy and leadership has made Mirziyoyev a popular statesman. Under his tenure, the country has been experiencing prosperity and socioeconomic development.

The Uzbek president's proposal of reinvigorating Central-South Asian regional connectivity has been welcomed by the world. At the summit, too, he made several important proposals to boost multilateral cooperation under the SCO framework.

Some of his key proposals include the call to create a common space for industrial and technological cooperation based on the "New Economic Dialogue "of the SCO; organizing a week of business partnership for SCO member states in Uzbekistan; creating a "series of special economic zones" for SCO states; holding a large trade fair of SCO states every year and, based on that, building a common electronic platform; taking measures to ensure food security for member states; organizing an international conference on food security in 2023; developing an interregional center for interconnectedness, with the help of the United Nations, in the city of Tashkent; and hosting the first "SCO Transport Forum" in Uzbekistan next year.

The SCO's development road map depends on the implementation of the above-mentioned proposals.

Although the summit provided an opportunity to determine the SCO's potential and strengthen its role in regional cooperation, the member states need to devise plans and strategies for practical actions including taking measures to expand people-to-people exchanges at all levels. In this regard, the private sector and civil society organizations, too, can promote intergovernmental cooperation.

Maintaining peace and promoting development in the region remain a major task for the SCO, for which improved connectivity is a prerequisite. It is hoped that Uzbekistan, as SCO chair for the year, will take on the challenge and help create the necessary opportunities to deal with common challenges.

Openness, inclusiveness and mutual learning are the defining features of Uzbekistan's foreign policy. And the experience of holding major regional-and global-level meetings and learning from new developments will help Uzbekistan to not only widen its vision and approach but also boost its economic development and become more prosperous, strong and democratic.

With courage and determination, the Uzbek leadership has succeeded in blazing a new trail in diplomacy and development, not least because its endeavors are aimed at advancing the cause of regional integration with a forward-looking spirit.

Moreover, the participation of Chinese President Xi Jinping in the summit added to the value of the event. China has also been working to broaden the horizon of the SCO and engage with all countries in the region, and has always emphasized the importance of mutual learning and mutual respect to realize the full potential of cooperation, multilateralism and economic globalization.

In the new era of global economic governance, upholding multilateralism, pursuing shared growth, forging close partnerships, and building a community with a shared future have become the trends of the times.

The Eurasian economies know this full well and are exploring new ways to promote inclusive development and enhance people-to-people exchanges. But to realize its goals, the SCO has to overcome multiple challenges and make certain adjustments.

For example, it needs to be more open and tolerant in concept, and more inclusive and better balanced in its orientation so as to provide more benefits for its member states. And the Samarkand summit has ushered in a new era of harmony and cooperation, which will help the SCO to achieve its precious goals.

The author is executive director of the Pakistan Research Center for a Community with Shared Future, Islamabad.