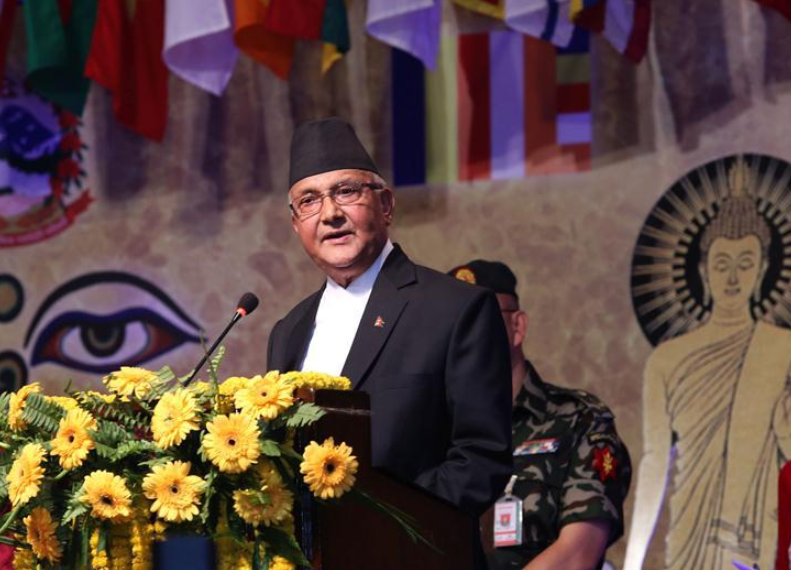 Nepali Prime Minister  K.P. Sharma Oli's visit to China on June19-24 carries immense importance for bilateral relations, with a slew of agreements lined up in trade, commerce and infrastructure. Various ministries are working to do the homework, mainly on energy, railway and trade.

The prime focus would be on implementing a past accord with China signed by Oli during his last visit in 2016.  The Nepalese leader is going to meet Chinese President Xi Jinping.According to reports, rail and road links, energy, petroleum storage facilities, transit and transportation systems would also feature on the agenda. A memorandum of understanding (MOU) on launching a joint feasibility study on Nepal-China free trade agreement and a MOU on investment and production capacity are expected to be signed. The pact on joint coordination and implementation Mechanism is also in its final stages. An agreement on oil storage facility is also on the cards. The Himalayan nation, largely reliant on India for most of its needs, suffered an undeclared blockade that lasted for several months in 2015. Following the siege, Nepal sought to identify other options to avoid such a situation in the future. Rail and road links that opened the north will not only reduce dependence on its southern neighbor, but actually open the doors to opportunities. During the visit, MOUs on Nepal-China rail corridor, feasibility study and Keyrung-Kathmandu railway will be signed, according to reports. Nepal established diplomatic relations with China in 1955. According to historical records, Nepal was the transit point for economic activity between China and India during the Licchavi dynasty's rule in Nepal. Ancestors of both countries have had the wisdom to harness mutual respect that was handed down to the present generation. This visit can be made an exemplary one by the execution of past agreements and further understanding. A transit point will open opportunities for social and cultural exchange and will bring in lots of projects and plans in the future. Nepal as a hub can play a central role in bringing immense possibilities of development for the region. Investment in hydro power plant, tourism, banking, medicines, herbs and agriculture-based industries are the areas that should be given priority. Nepal has one of the largest hydro power capacities in the world. China has already expressed interest and applied for a license to the Ministry of Energy, Water Resources and Irrigation. Energy trading is another prospective area between Nepal and China. Proper harnessing of hydro power resources will boost Nepal's development. Besides, Nepal should urge both its neighbors to invest in the creation of an economic zone and market for necessities. Evidently, discussions on Belt and Road initiative (BRI) will be another key feature of the visit. China hopes to see Nepal's response to BRI. Infrastructure and geography have always been a challenge for Nepal. Lack of consistency in policies and dearth of political commitment are the biggest factors that hold up development processes. Long-term strategic plans need institutionalization. Nepal-China relations should be driven by long-term strategy based on mutual understanding and cooperation. Geographical difficulties can be transformed into opportunities by cleverly dealing with the situation. Last but not the least, agreements signed during the previous visit need effective execution. Oli was applauded for his last visit to Nepal's northern neighbor. So the expectations from this visit inside Nepal are high. The people of Nepal are watching this historic opportunity with some apprehension and great expectations.