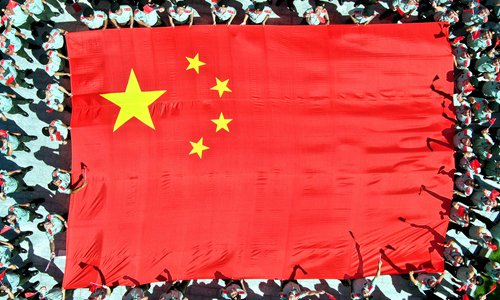 A group of cops in Shenzhen, Southeast China's Guangdong Province, pose for a photo with the Chinese national flag before the 70th anniversary of the founding of People's Republic of China. (Photo: IC)

How will future historians record this Year of the Rat? It's impossible to predict even though so much has happened. Still it seems a few touching moments will surely be included in future textbooks.

For example, words such as "Stay strong, Wuhan" are written on the billboards of many shops in Tokyo, Japan. South Korean President Moon Jae-in expressed his sympathy to the Chinese people who are fighting the novel coronavirus epidemic, saying that helping a neighbor is helping oneself. History will certainly mark these touching events.

Along with positive voices, two malicious points of view toward the ongoing coronavirus outbreak in China are spreading in the Western countries.

One is naming the novel coronavirus the "China virus" or "Wuhan virus." At the end of January, a newspaper in Denmark published a cartoon of the Chinese national flag that replaced the five symbolic stars with virus-like figures. Facing China's protest, Danish Prime Minister Mette Frederiksen responded that "we have freedom of expression in Denmark - also to draw."

Such a position can be seen in other European countries as well. A German magazine insulted China by claiming the novel coronavirus is "made in China." And a host of a local radio program in the Netherlands danced while singing the virus was created by "dirty Chinese people" and "if you don't want to get infected, please stay away from Chinese food."

The other malicious attach was calling China "sick man." On February 3, the Wall Street Journal published an opinion piece titled "China Is the Real Sick Man of Asia." The column was filled with ill-disguised arrogance and a sense of superiority that comes out of nowhere. The sinister intention of the newspaper and the author was to humiliate China.

I have read the author's book on the history of US diplomacy, an outstanding and broad-view work. But now, he took the epidemic as an opportunity to attack China as "a sick man," I was surprised how could his understanding of China be so unexpectedly narrow?

The Chinese people, who are becoming increasingly more confident, don't get offended or outraged as easily as they used to. Now, the Chinese people tend to find those authors ridiculous, ignorant and hypocritical. They do not understand China or the world, nor do they have the empathy and passion that people are supposed to have.

In daily life, if we hear that a member of a family has been diagnosed with an infectious disease, would we laugh, speak sarcastically or blame the person? What would you think if someone made groundless accusations against or even insulted the patient?

I do sympathize the above-mentioned authors, because history will not record their arguments in a positive way. Their voices will smell like stinky farts, making people frown and walk away. Perhaps some impartial historians will tell later generations how the epidemic in China mirrors the greatness of many people and the paltry sense of compassion a handful of others have demonstrated disgracefully.

Two American scholars are brought to mind. The first is Gordon H. Chang, a Chinese-American lawyer and author, who wrote The Coming Collapse of China about 19 years ago. But China has not collapsed, and he is often teased by other scholars who ask him "when exactly will China collapse?"

The other is David Shambaugh. He could have become a scholar like Harvard professor John Fairbank, and praised by Chinese academics as a renowned third-generation "China hand." But his 2015 article, "The Coming Chinese Crackup," also published in the Wall Street Journal, was his biggest flop. It made him one of the most unpopular and despised US scholars in China.

Foreign scholars and others should not always criticize China on the pretext of so-called freedom of speech. On the contrary, they should cherish their right to freedom of speech, presenting the love and equality of humanity. Although the outbreak of the novel coronavirus is spreading across China, the Chinese people are not a virus. Although some Chinese people have been infected, China is by no means a sick man of Asia.

Several years later, historians may portray the year 2020 as: "The Chinese underwent a tough time over the year. They had to battle the novel coronavirus epidemic at home, and deal with insulting attacks from some foreigners. Yet they are strong and they stay strong. This great country has weathered the year of 2020, like any year over its history of 5,000 years, and they have achieved their goal of making their lives better."