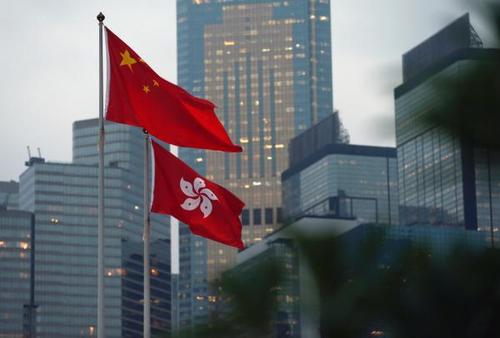 That there is a legislative gap in the Hong Kong Special Administrative Region that needs closing is evident from the outcry that has greeted the State-level move to establish and improve the legal framework and enforcement mechanisms in the SAR to better safeguard national security.

Despite it being illustrative of the "one country, two systems" principle and a reinforcer of that framework, it is those forces inside and outside Hong Kong which are hostile to Beijing that persist in smearing the legislation as a threat to local residents’ freedoms.

These forces, which have been colluding with each other to make trouble in the SAR, claim that the legislation that China’s top legislature conducted the first review of from Thursday to Saturday is “unconstitutional” and will extend the reach of China’s “invasive state security apparatus” into what was “formerly a bastion of liberty”.

They do so on the basis that the draft law is being introduced by the national legislature rather than the SAR’s, despite this being in accordance with the Constitution of the People's Republic of China and Hong Kong’s Basic Law. And they do so despite the ringing endorsement the move has received from a wide swath of Hong Kong society, including multinational corporations.

The draft law makes explicit stipulations on what constitutes four categories of criminal acts and their corresponding criminal responsibilities. They include acts of secession, subversion of state power, terrorist activities, and collusion with foreign or external forces to endanger national security, all of which are threats to any state.

Yet, laying bare their intentions, none of the opponents of the legislation has uttered a word against such acts in relation to what has been happening in Hong Kong. The justification for their sanctimony is their habit of meddling in the internal affairs of other countries on the pretext of upholding human rights.

The support many countries expressed for the national security legislation in the 43rd conference of the United National Human Rights Council in Geneva from Tuesday to Friday was in stark contrast to the opposition voiced by the United States and its retinue and laid bare the attempt of these countries to use Hong Kong as pawn in their games against China.

The fact that Hong Kong remains a weak link in national security and an easy target for hostile foreign or external forces to disrupt public order and jeopardize social and economic interests makes it clearly imperative for the central government to take the decisive move to plug the legal loopholes.

Only through establishing and improving at the national level the legal system and enforcement mechanisms for Hong Kong to safeguard national security can the small number of illegal and criminal acts of endangering national security be effectively prevented, stopped and punished in the city and thus create a stable and peaceful social environment for addressing its underlying problems in the economy and people's livelihood.

Only by doing so, can China's national security and the long-term prosperity and stability of the HKSAR be better safeguarded.