For both leisure and work assignments, I have been on the road - or more precisely in the air - for the past few weeks, travelling from Asia to Europe to Africa. While the endless flight hours and constant changes in time zones were a challenge, what really bothered me throughout my journey was one question: 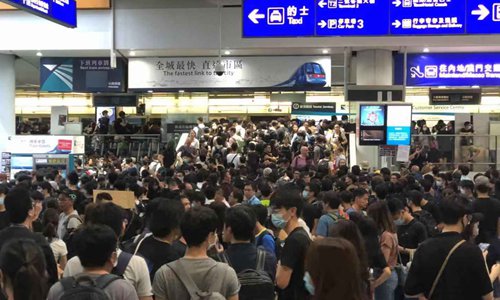 When many around the world draw inspiration from China's success story, why are some in Hong Kong trying to destroy it rather than preserving it? After all, they are also Chinese and they should be part of that story.

When a fellow passenger in a lounge in the busy airport in Doha, capital of Qatar asked me "what they are not happy about?" pointing to violent protests shown on the Al Jazeera news channel. I was caught off guard and couldn't come up with a quick answer, even though I had left Hong Kong earlier that day after covering the protests for several days.

"I don't really know," I said. And that is an honest answer. I know they started off as protests against an extradition bill, which was grossly misinterpreted. But after that it wasn't clear. The protests talk about more autonomy, but Hong Kong already enjoys a very high degree of autonomy under the "one country, two systems" mechanism. They ask for universal suffrage, but as many have pointed out, that crosses the bottom line and will never happen.

No clear, achievable goal, but they continue their protests and try to cripple the city.

What's also concerning was that I found that many in the city hold vastly twisted and negative views about the Chinese mainland - ones we have seen so often in some Western media reports.

A taxi driver, who claimed he "knows the mainland very well" and sang old songs about Chairman Mao Zedong and talked nonstop in the roughly 40-minute drive from the Hong Kong airport to the hotel, basically repeated claims made by Western officials and media: The US helped build China; China stole technology from the US; the "Made in China 2025" is a threat to the US' technological dominance.

"So just because it's a threat to the US' dominance, we should give up technological advances?" I asked him. "It's not about that," he answered. "What it is about then?" I followed up with a smile. He deferred.

That's not even the big problem. In Hong Kong, if you speak Putonghua, the official dialect in the country, you could be beaten by violent protesters or get an unfriendly stare from a waitress at a restaurant. They have defaced China's national emblems and shouted insulting slogans about the mainland.

It was a surreal experience that left me in disbelief because I never travelled to anywhere that is so unfriendly toward me because I was from the Chinese mainland. Anywhere I travel these days, locals are often very friendly and are genuinely interested in China and its economic success.

In Norway, many said how impressed they are about how fast China embraces new technologies such as mobile payments. In Demark, a waiter said he was a "big fan of Chinese culture" so that he even got tattoos with Chinese symbols and wished that he could visit China soon.

In Botswana, a small southern African country known for diamonds, the friendly attitude toward China came from all corners: Its government is working to strengthen ties with China; businesses seek opportunities with China; locals want jobs at Chinese companies.

A university student in the resort town of Kasane told me that she and most her friends dream of going to study in China.

Ye Xiaoyang, a businessman from East China's Fujian Province who has lived in Botswana for more than 20 years, said something that really struck me. "Many of these people are not patriotic, because they never lived outside of the country," he said. "Once you live overseas, you know how important it is that you have a powerful country behind you. It helps in ways you can never imagine."

While some in Hong Kong are radicals with ulterior motives, I still believe that many just lack the proper understanding of what their country is about and where it is headed. If there are some areas where we need improvement, they should work to improve them and not use it as an excuse to further destroy the city.

It seems many in Hong Kong are more inclined to believe whatever Western officials and media outlets say, so here I quote a legendary US President John F. Kennedy: "Ask not what your country can do for you - ask what you can do for your country."