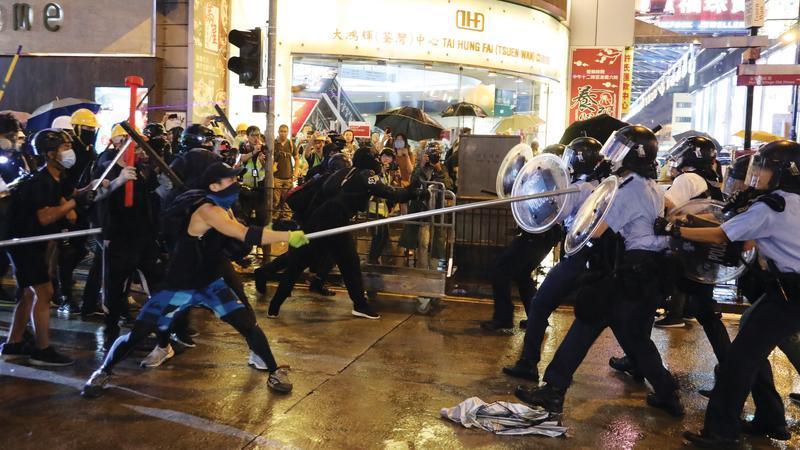 It happened again in the festive season — swarms of youngsters in Hong Kong jeopardized their future, and the livelihoods of their fellow citizens, to launch violent protests against the Hong Kong Police Force. Unprecedented social unrest in the special administrative region has lingered for seven months, but local residents seem to have become accustomed to living with street violence. Shopping centers have been turned into weekend battlefields and holiday war zones. The festive season in 2019 in Hong Kong was no longer about celebrating and shopping, but about outbreaks of violence and a growing number of people being arrested. This had reached more than 6,500 people by the first week of 2020.

Local media mourn the "loss" of a generation (or two) in the SAR as almost 40 percent of those arrested are students — with the youngest being only 11 years old. Experts denounced the education system for indoctrinating students with anti-mainland ideas. The mainstream media have long nourished anti-China sentiment in schools and other places. As a result, a large number of pupils in the city have grown up to become an aimless "lost generation" spiritually alienated from their motherland.

Endless waves of social unrest in Hong Kong demonstrate the destructive effect that the West's hostile media propaganda has had on Hong Kong. Although the rise of China has nurtured a generation of successful professionals and entrepreneurs on the mainland and in Macao, quite a few talented young people in Hong Kong have failed to seize the great opportunities available to them. This is because of their reluctance to participate in national development. The rejuvenation of the Chinese nation benefits the rest of the world, especially countries participating in the Belt and Road Initiative. Yet many young people in Hong Kong are reluctant to join this. Some silently watch from the sidelines while others vent their anger at social inequality or other problems by staging street protests against their own country. This lost generation is becoming defiant losers and they are impossible to reason with. They enjoy breaking the law and glorifying in their contempt for the rule of law.

This ironic situation has its root causes in Sinophobia, a sentiment which prevailed in Hong Kong long before the establishment of the SAR. For generations, students in Hong Kong have been nurtured in a social and cultural milieu where they demonize all communist countries, including China. Moreover, biased coverage by the Western media has attracted a number of local media followers who have propagated Sinophobia among SAR citizens. As the anti-extradition bill saga played out, the pernicious actions of Western agencies, as well as social media hostile to the SAR government, became obvious. They wasted no efforts in churning out lies, rumors and hatred to stir up young people protesting on the streets. Even some illegal and violent protests against the central and SAR governments were portrayed as "pursuing democracy" by the Western media. This, in turn, gave rebellious rioters the illusion of righteousness. Street violence, therefore, became rampant and vandalism fashionable in Hong Kong.

An international media watch group, Fairness and Accuracy In Reporting (FAIR), conducted a study of the coverage of Hong Kong's unrest by The New York Times and CNN. It concluded that the mainstream media encourage public resentment against the Hong Kong police by spreading fake news and the political propaganda about the SAR government. FAIR noted that the two media giants unfairly covered the riots in Hong Kong and other parts of the world, including Haiti and Chile. According to FAIR, The New York Times and CNN were disproportionately interested in Hong Kong, with 40 times more than the coverage of Haiti, only because Hong Kong radicals were seen to be targeting "communist China" — the official enemy of the United States. The Western corporate media took the same approach to Hong Kong, presenting the situation as "anti-totalitarianism" — a so-called "moral high ground" — that serves only to condone and encourage street violence in the SAR.

In Chile, for example, right-wing President Sebastian Pinera literally declared war and sent tanks into the streets. This resulted in 26 people dying and over 26,000 people being arrested. CNN, however, devoted only 36 reports to the events in Chile without mentioning "totalitarianism". In comparison, though no one has died at the hands of the police in Hong Kong and the number of arrested people was a quarter of that of Chile, The New York Times and CNN had produced 737 articles on the riots in Hong Kong by the end of November. The priority and terms used in covering the riots in the SAR were not about journalism, but served the US' political agenda — to contain China through sabotaging Hong Kong — and by encouraging rebellious young people to protest on the streets.

The majority of those young people arrested, especially the hardcore fanatics, are aware of the dire consequences of participating in riots. However, few of them show any regret about breaking the law. Even public opinion in Hong Kong has the tendency to justify illegal activity in the movement. The latest study by a prominent think tank in Hong Kong, Bauhinia Foundation Research Centre, warned that nearly 40 percent of local residents believe breaking the law for reasons of social justice is acceptable. A spiral of degeneration is taking shape. If the SAR government fails to stop this vicious trend, such destructive forces will reach their full capacity sooner or later.

Young people should be protected and encouraged to embrace the motherland. As such, the Hong Kong government should take prompt action against the hypocrisy of the Western media. It should use solid facts, convincing comments and professional strategies. Local media should shoulder the social responsibility to reveal the truth, instead of repeating cliches which serve only the political agenda of the West.

The author is a current affairs commentator.