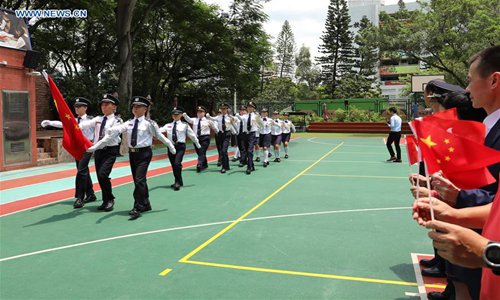 Hong Kong has seen two months of unrest, with a new round of protests taking place on Sunday. The recent protests are the biggest crisis the Hong Kong Special Administrative Region (SAR) government has faced since the handover in 1997.
What started as protests against a proposed legislation bill by the Hong Kong SAR government to extradite fugitives between Hong Kong, Macao, Taiwan and the Chinese mainland has become increasingly violent in recent weeks.
A fair number of the protestors are young people. Since the umbrella movement in 2014, Hong Kong's youth has become more active in making their voice heard.
The young people in Hong Kong have taken to the streets because they feel unhappy and frustrated.
Although 50 percent of Hong Kong youth have a university degree, they make less money. According to research by Hong Kong political group New Century Forum in 2017, the median income of college degree holders in Hong Kong dropped 5.5 percent over the past 20 years.
Meanwhile, there are fewer jobs available for higher positions. This means graduates have to settle for jobs that require lower qualifications, which has led to a problem of mobility for the young people.
As for housing, young people in Hong Kong can't afford to have a place of their own because of the city's exorbitant property prices, which are among the most expensive in the world.
Hong Kong youth lack dreams and have the least motivation to fulfill their dreams, according to a survey comparing 4,000 youth of Chinese ethnicity aged 18 to 35 in Hong Kong SAR, the mainland, Taiwan Island and Singapore in 2017.
But a sense of frustration does not mean young people can break the law and affect other people's lives with violent protests. Hong Kong Chief Executive Carrie Lam Cheng Yuet-ngor said the economic implications of the ongoing protests for Hong Kong could be worse than in 2003, when the city's economy was hard-hit by the SARS (severe acute respiratory syndrome) outbreak.
Hong Kong youth should instead make use of their advantages and improve their disadvantages to break the current bottleneck.
They have a better command of English in general compared to their mainland counterparts. English is an official language of Hong Kong together with Chinese, and English is widely used in Hong Kong society.
Hongkong people are known for being flexible, for their can-do spirit and an ability to execute. This gives them an edge in the job market.
At the same time, the young people in Hong Kong should take risks and dream big. Most of the students who get the highest score in the Hong Kong Diploma of Secondary Education examination choose to study medicine at college. This is because being a doctor is a respected and stable job with a good salary.
The costs for young people who want to create a business of their own in Hong Kong are often too high. That's why they should explore opportunities beyond Hong Kong, especially in the mainland economy which has been rapidly expanding in recent years.
The Guangdong-Hong Kong-Macao Greater Bay Area can be a very good option for Hong Kong's youth. Apart from the different funds established by the Hong Kong government for which young Hong Kong entrepreneurs can apply - such as two new funding schemes that were newly introduced in March - they can also benefit from the concessionary policies introduced by the municipal governments in the greater bay area.
By May, there were already 10 entrepreneurial bases established, with hardware and software support provided to innovative activities.
The Hong Kong government should meanwhile recognize its youth policies have been inadequate. The government should continue to provide more support to help young people find jobs and provide them with more affordable housing. If Hong Kong's youth are willing to broaden their perspective with the help of policy initiatives, it's only a matter of time before they can break out of their current predicament.