House speaker fiasco exposes the rot in US political system 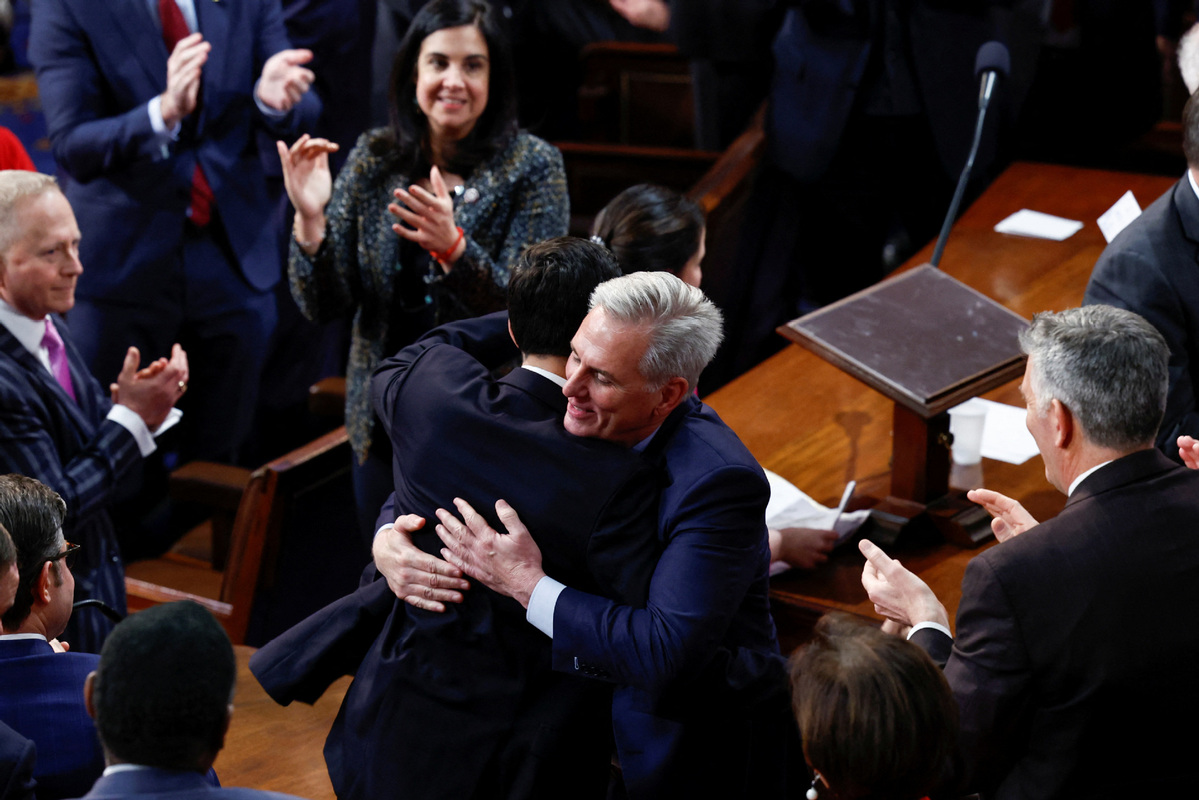 US House Republican Leader Kevin McCarthy (R-CA) hugs his Floor Director John Leganski as he celebrates being elected the next Speaker of the US House of Representatives while Republican Conference Chair Elise Stefanik (R-NY) applauds in a late night 15th round of voting on the fourth session of the 118th Congress at the US Capitol in Washington, US, January 7, 2023. Photo/Agencies

In his first speech after being elected speaker of the House of Representatives on Saturday, Kevin McCarthy, as predicted, swiftly laid his China card on the table.

Paralleling the rise of the Communist Party of China with debt as the two pressing challenges the United States faces, he urged Congress to speak with one voice on China, and called for a "bipartisan select committee on China" to be set up to investigate how to bring back the hundreds of thousands of jobs that he alleged went to China.

Although his remarks were politically correct for Washington, they only won the new House speaker sparse applause, as his words exposed McCarthy's narrow vision and inability to address the true challenges confronting the US-not just the divide between the Republic and Democratic parties, but also the internal splits in the two parties, that aggravate the fractures in the country.

Instead of proving he is better than Nancy Pelosi for the post, McCarthy clearly showed he intends to copy the old tricks of his predecessor by trying to dupe the US people into believing that the problems of the US can be resolved by getting tough on China. Something that has already proved futile as China is not the cause of the US' self-inflicted woes.

As a matter of fact, McCarthy and Pelosi, in the post, are both part of the problems they have supposedly been elected to resolve as they are in the first place speaker of interests for the Republic Party and the Democratic Party respectively, if not certain fractions of the parties they represent.

The divorce between political parties and the US people, and McCarthy and Pelosi's close connections with their respective fractions in the parties mean neither of them can speak for the general public without first weighing the gains and losses of their own vested interests.

That it took a total of 15 rounds of voting, the most ever, to elect McCarthy for the post, despite the fact he was regarded as the most likely candidate for the position from the very beginning, is evidence of the deep fissures in the Republican Party. The three days in which the 15 rounds of voting were carried out were actually a process of seeking compromises within the Republic Party by forming a new set of rules for the trade-off of support for interests.

It is the collusion between these politicians and business tycoons — the former act as speakers for the latter, and the latter function as "white gloves" for the former in a revolving-door model — that poses the real challenges to the US as it is the rot that is undermining the foundations of the country.