How a dry spell allowed winds to lash California with flames 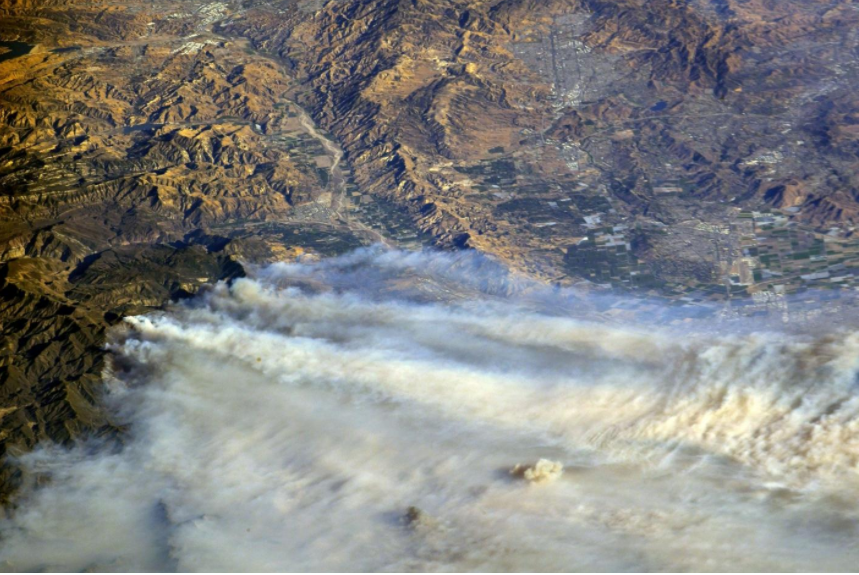 A photo taken from the International Space Station and moved on social media by astronaut Randy Bresnik shows smoke rising from wildfire burning in Southern California, US, December 6, 2017. Photo: REUTERS

Hot, dry Santa Ana winds will likely whip up the unseasonably fierce wildfires ravaging Southern California on Thursday, forecasters said. The gales have come at the worst time, at the end of a long dry spell.

The combination of savage Santa Anas and tinder-dry plants have ignited large wildfires in the region this week, upending lives at a time when many people were preparing for the winter holidays, officials said.

It served as a reminder that parts of California increasingly face a year-round threat of flames.

“There is no fire season anymore,” said California Department of Forestry and Fire Protection (Cal Fire) spokesman Scott McLain, adding that this was particularly true in Southern California.

In Ventura County, the Thomas Fire has scorched more than 90,000 acres (36,422 hectares) some 50 miles (80 km) northwest of Los Angeles and destroyed 150 homes since breaking out on Monday. Three other wildfires are also raging in and around Los Angeles.

The Santa Anas, winds that rush through California’s coastal mountains, foothills and canyons from deserts to the east, will blow hard again on Thursday and Friday, said National Weather Service meteorologist Carol Smith. Gusts of up to 60 miles per hour (97 km) are forecast.

The Santa Anas typically begin in late September and it is not unusual for them to peak in December or January, officials said.

This year, however, the winds follow months of low rainfall.

Since Oct. 1, Los Angeles has received 0.11 inches (0.3 cm) of rain, Smith said, compared to normal precipitation of more than 2 inches (5 cm) over the same period. 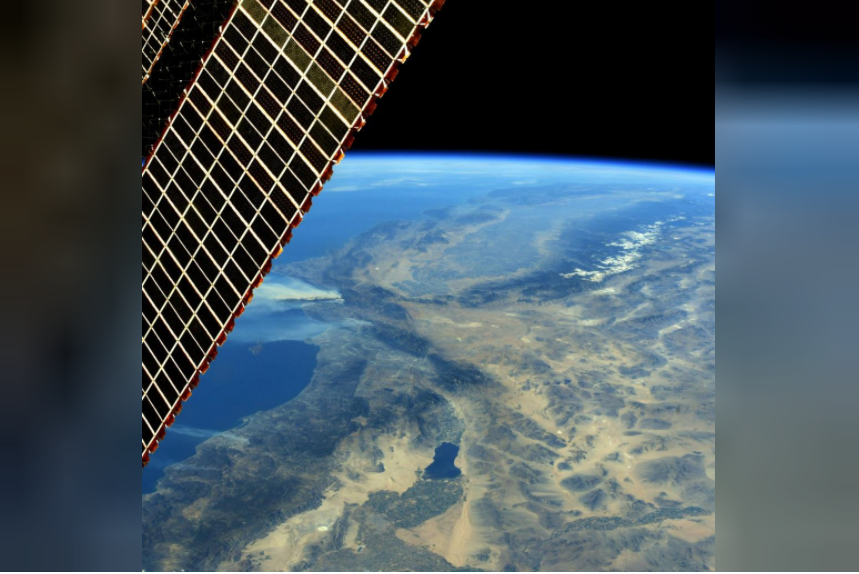 A photo taken from the International Space Station and moved on social media by astronaut Randy Bresnik shows smoke rising from wildfire burning in Southern California, US, December 6, 2017. Photo: REUTERS

Southern California’s dry spell this fall followed heavy rain that soaked the region a year ago, which itself came on the heels of five years of drought.

“Absolutely climate change is affecting precipitation - that’s why we are seeing record drought followed by record rainfall,” Erin Mellon, a spokeswoman for the California Department of Water Resources said in an email.

In wetter years, rainfall has given trees and plants enough moisture to withstand flames, said Tom Rolinski, senior meteorologist with the US Forest Service.

Southern California in the past often saw the fire season end around November, Rolinski said.

To that end, large fires in December have been rare in California for more than a decade, according to Cal Fire records.

The last time Southern California saw a blaze in December that burned thousands of acres was in 2006, the records show. That year, the Shekell fire in Ventura County charred 13,600 acres (5,504 hectares) and damaged or destroyed 18 structures.

Even though flames came late this year, people in the city of Ventura evacuated quickly, said local City Councilman Erik Nasarenko, who was among those forced to flee.

Residents were starkly aware of fires in Northern California that killed more than 40 people in October, Nasarenko said by phone. Those October blazes were the deadliest rash of wildfires in California history.

“The consciousness of the residents of Ventura was raised,” Nasarenko said.