OPINIONS How Australia is pushed to a belligerent path

How Australia is pushed to a belligerent path 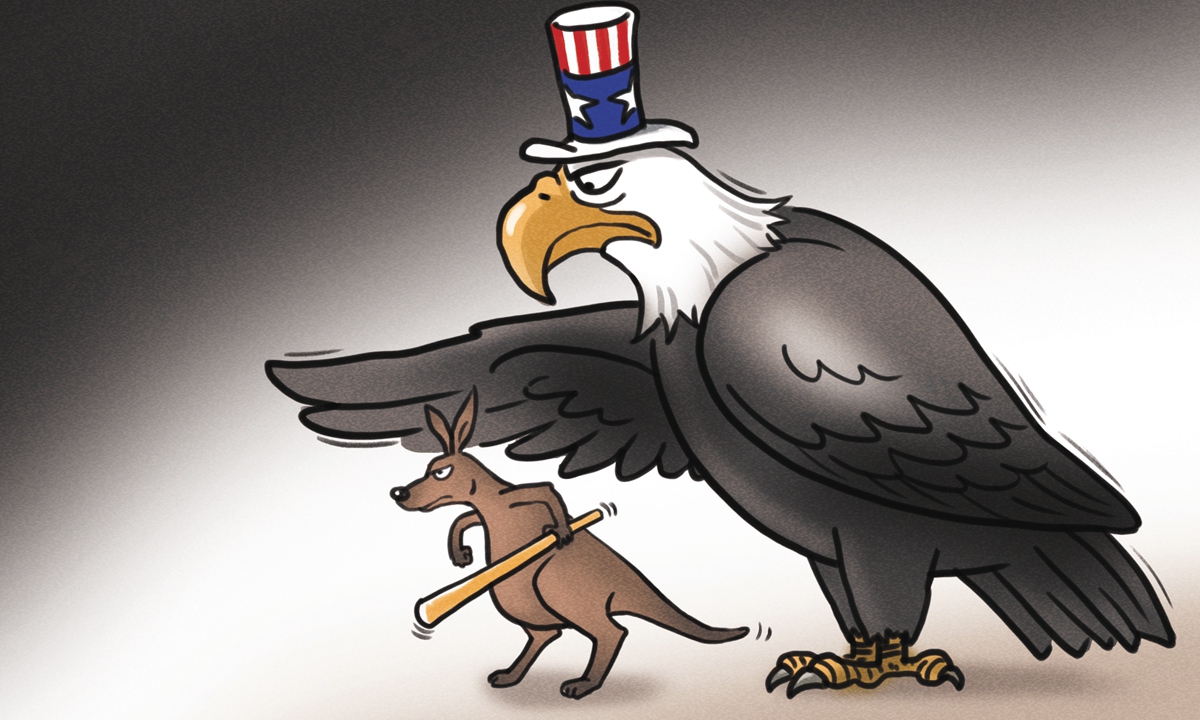 Australia was seemingly a land of peace in the South Pacific. But it has gone further down the belligerent path. Its change of attitude toward China was accordingly rapid in the past few years.

How did Australia change so much in just a few years and get to this point?

Former Australian diplomat Jocelyn Chey said in a recent interview with the Global Times, "ANZUS commits us to coming to the aid of the US in the case of an attack on their forces, not an attack by their forces, but over the last decade, Australian military forces have become more and more a kind of auxiliary force capable of being deployed to meet US requirements."

The content of ANZUS (a security treaty among Australia, New Zealand and the US) is not complicated, with broad rules for how the other two parties should react when one party is under an armed attack. However, Canberra is trying to elevate the treaty from defensive to offensive by proactively vowing to participate in US offensive military attacks on other countries. "If Canberra sends troops to the Taiwan Straits, it will be an act of aggression grossly trampling China's sovereignty," said Chinese military expert Song Zhongping.

Chen Hong, a professor and director of the Australian Studies Center at Shanghai-based East China Normal University, told the Global Times that there has been a big shift in Australia's view of its role: It sees itself as an active player in US' anti-China strategy, rather than just a follower.

"This is a relatively dangerous signal," Chen said. Canberra is no longer satisfied with its roles as an assistant, follower or "deputy sheriff," so it is emphasizing more on its military role and position. Australia has been playing the role of a daring vanguard for the US - even before Washington takes actions, Canberra has already rushed out. "AUKUS has allowed Australia to have nuclear-powered submarines. When it possesses the technology, it may be able to research, develop and even deploy its own nuclear weapons," Chen noted.

"Australia has been on a belligerent path, and it continues going far far away. When there is a whiff of gunpowder in the air, it could bring the risk of insecurity to the country," Chen continued.

People with real power in Australia's defense spheres such as Defense Minister Peter Dutton and Home Affairs Secretary Mike Pezzullo have uttered wild words to hype a war with China. Anyway, they are not worried whether a war really breaks out. As The Guardian wrote in April, "Dutton and Pezzullo talk up the beating drums of war - but it is not them who will have to fight."

Politicians' warmongering remarks repeatedly made headlines while Australia's diplomatic voice became almost about only military and security as Canberra turned more and more bellicose. Dutton, who is far-right, has a batch of solid supporters. If Australian Prime Minister Scott Morrison doesn't share the same view with Dutton in some issues, he may have to face the rebounds from the Dutton camp, which does no good to strengthen Morrison's position. Therefore, Morrison has been in synergy with Dutton, keeping silent on Dutton's words as a deliberate catering to far-right forces. Consequently, Dutton and his fellows have become more vocal.

Echoing the bellicose politicians, Rupert Murdoch's media outlets in Australia have been working hard to incite war, with articles in the Sydney Morning Herald, The Australian and others constantly attacking China. Sky News Australia, controlled by the Murdoch family, recently aired a two-part program entitled "China Rising" in which Dutton again sells his false accusations against China, engaging in information warfare and creating an atmosphere of war.

'Democracy' as a tool

In July, the Lowy Institute released its annual poll of 2021, the result of which shows Australians' perception of China as "more of a security threat" sharply increased from 12 percent in 2018 to 63 percent this year. In the meantime, 57 percent say that "Australia should remain neutral" when asked about a military conflict between China and the US. These seemingly contradictory numbers reflect a relative sober mind about what most Australians think about getting involved in a war.

"No matter how media and politicians hype a war, most Australians don't want one ever. They have become confused and even vigilant about politicians' warmongering statements. They believe such politicians are leading their country onto a path that will really threaten their security," Chen noted.

On the other hand, the drastic change in attitude toward China also shows that ordinary Australian's perception of China is being poisoned by media and politicians at the behest of their patrons. The Morrison administration says the country is a "proud democracy in our region." This is ironic, as Australia's democracy has long been abused and manipulated as a tool for a few politicians to steer public opinion.

When former US president Donald Trump took office in January 2017, China-Australia relations began to go downward until where they are today. In 2018, 82 percent of Australians viewed China "more of an economic partner to Australia," with only 12 percent took China as a security threat. But almost four years later, the attitude has completed reversed. This is a result of Canberra's synergy with Washington. This "lacks political wisdom and common sense," commented Chen, who believes that China-Australia relations may reach even lower ebb as the Morrison administration has engaged in election campaigns with such synergy.

"Australia's internal affairs are heavily influenced by the US. Washington's support is needed for politicians to rise in Aussie government. Morrison seized power with it, and others also began to follow suit. Ambitious Dutton who wants to take over Morrison's seat knows how this works. So it is not surprising that warmongering talk is on the rise as federal election draws near," said Yu Lei, chief research fellow at the research center for Pacific island countries in Liaocheng University, East China's Shandong Province.

"Australians are aware of the dire consequences of a war. However, as mainstream Australian media are deeply influenced by the US, there is rare anti-war voice. But on social media platform it is a different scenario, which represents the real public opinion," Yu noted. For example, some Twitter posts that criticize Dutton for using "claptrap" or being "stupid" threatening to attack China have received more than thousand likes.

Some knowledgeable people in Australia have seen through this. For example, former prime minister Paul Keating has also accused the Morrison administration of turning Australia's back on China. He said that "[t]he moment a loud shot was fired, the Indians would lock themselves in their peninsula … leav[ing] the US and mugs like us carrying a military fight to the Chinese all by our righteous selves."