OPINIONS How China and Brunei reached a strategic cooperative partnership

How China and Brunei reached a strategic cooperative partnership 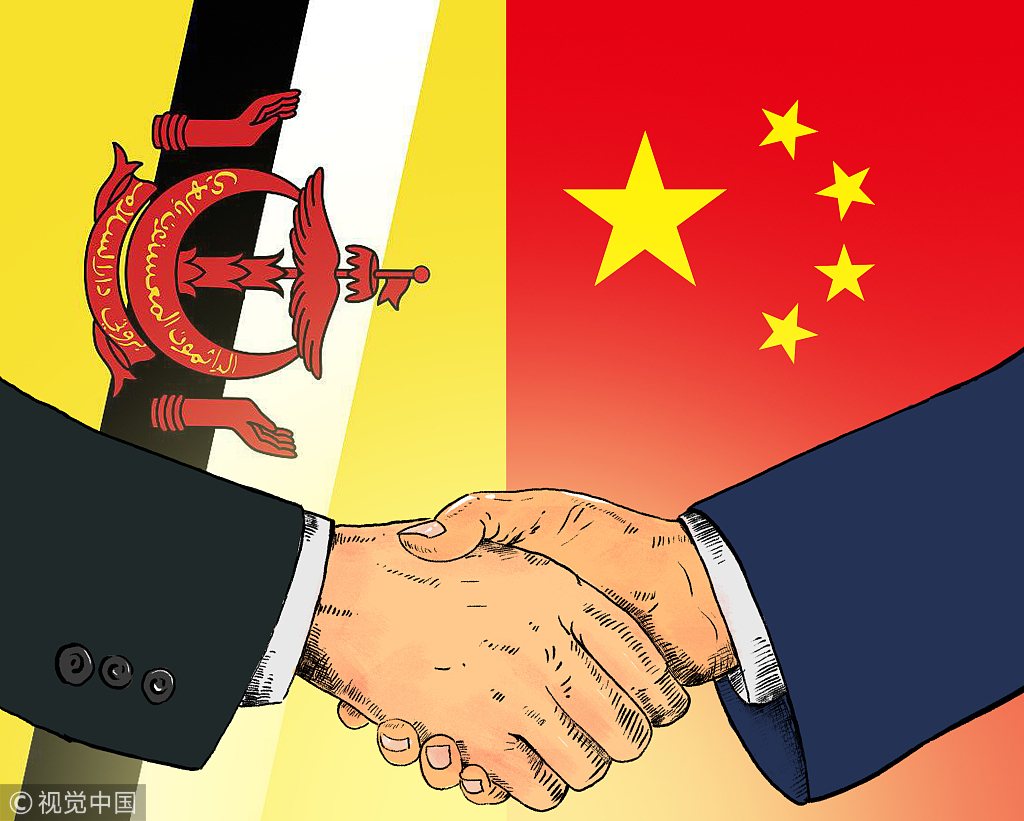 As the third largest oil producer in Southeast Asia and the fourth largest natural gas producer in the world, Brunei's oil and gas sector accounts for about 60% of its national economy. But in recent years, its economy has been hit hard by plummeting oil prices on the international market. The government of the Sultanate hence put forward a long-term development plan, Brunei Vision 2035, also known as Wawasan 2035, in an attempt to make inroads toward economic diversification.

However, during this crucial transitional period, a number of foreign investors have made a decision to leave the country. In the beginning of 2018, international banks such as Citibank and HSBC shut down their operations in Brunei. But one Chinese bank, Bank of China, has bucked that trend, opening a branch there in 2016, creating a much-needed source of capital for the country's economic diversification drive.

In fact, China has been moving to more closely cooperate with Brunei in its economic development over the past few years. The two sides upgraded their bilateral ties to a Strategic Cooperative Relationship in 2013 after first establishing diplomatic ties in 1991. 2013 is also the year Chinese President Xi Jinping announced his flagship "Belt and Road" Initiative, which has received a positive response and support from the Bruneian side. The two countries then signed an MOU designed to help integrate the BRI with Brunei's Vision 2035 program. The marrying of the BRI and Vision 2035 has injected new momentum into the development of bilateral relations.

Over the past five years, Brunei, along with other ASEAN countries, has become a founding member of the China-initiated Asian Infrastructure Investment Bank. In 2017, two-way trade increased by 36.5% year-on-year, hitting 1 billion US dollars, and Brunei's exports to China surged by 58.8% year-on-year as well.

An increasing number of Chinese firms are investing in Brunei. The largest joint venture, the Hengyi Petrochemical Project, which includes a total investment of around 15 billion US dollars, is now under construction. Upon its completion in 2022, the project should create around 10,000 jobs for the local residents. The Brunei-Guangxi Economic Corridor project planned 4 years ago is also expected to bring in more Chinese investment.

Apart from their cooperation in economics and trade, the Chinese side has actively participated in the construction of Brunei's infrastructure, helping build such projects as the Pulau Muara Bridge, the Telisai-Lumut Highway and the Ulu Tutong Dam. These projects have helped improve connectivity throughout the Sultanate. The soon-to-be-completed Temburong Bridge, the largest infrastructural project in Brunei's history, will connect the two main regions of the country, cutting the travel time from over two hours to only 20 minutes.

During President Xi Jinping's visit to Brunei, the two sides decided to further upgrade their relationship, which results from the headway made in their overall ties over the past 5 years.  Bilateral relations are expected to hit new and exciting heights following the move.

In a joint statement issued after the leaders' meeting, the two sides underscored the importance of resolving territorial and jurisdictional disputes through peaceful dialogue and consultations among the countries directly involved, and in accordance with universally recognized principles of international law, including the 1982 United Nations Convention on the Law of the Sea. Both sides have agreed that together with other ASEAN member states, they will work towards the full and effective implementation of the Declaration on the Conduct of Parties in the South China Sea, as well as press for more progress to be made in negotiations towards the early conclusion of an effective Code of Conduct in the South China Sea. This shows that both China and Brunei stand opposed to any intervention by countries not involved in territorial disputes in the region. These interventions, including so-called "freedom of navigation" exercises, quite often complicate the situation and even create tensions where there were none before.

Yang Jian, the Chinese ambassador to Brunei, recently pointed out, "China-Brunei ties have become a model of relations between big and small countries featuring mutual respect, equality and win-win cooperation." It's this philosophy that has created a positive vibe in the region, and is going to be the ultimate approach in creating peace and stability, as well as a flourishing of economic cooperation, in the Southeast Asian region.