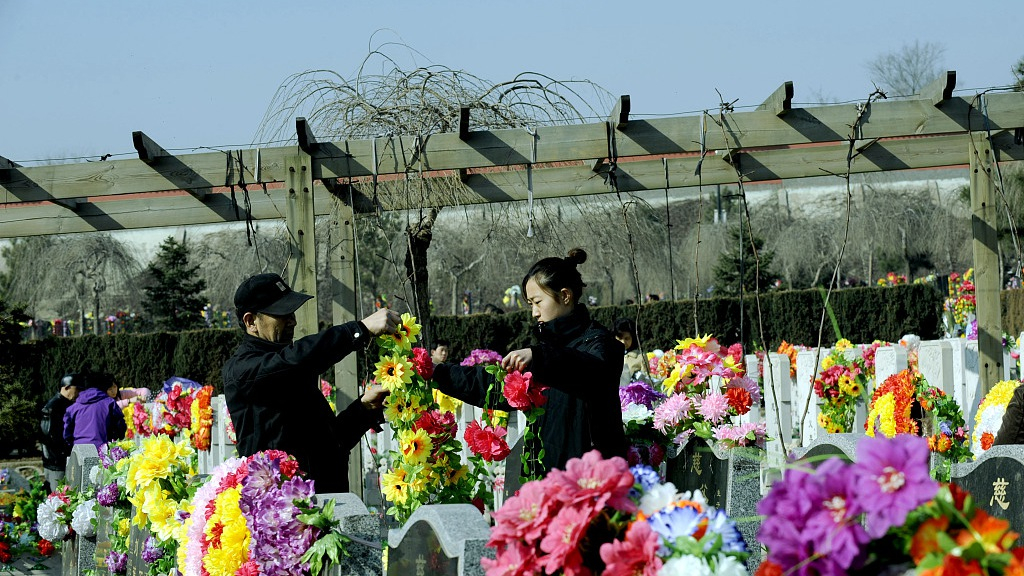 Friday is the Chinese traditional festival, Qingming Festival. Chinese people enjoy a three-day-off public holiday in April, one of the most delightful months in China. Cherishing the memory of deceased loved ones is a shared feeling of all human races, and observing certain rites on an annual basis is also common throughout the world. Chinese, however, may be the only nation that designates a date on the calendar as a time when the whole country visits tombs of their dead family members, especially the ancestors.

On the first day of the fifth of the 24 terms in the solar calendar, Chinese go to graveyards to present offerings to their loved ones in the other world and sweep clean the tombs. Different from the quiet memorial service westerners observe in a cemetery; the Chinese rite is more incandescent and noisy.

Candles and joss sticks are lit amid firecrackers exploding while "nether world money" is burnt in front of the tombstone together with the food the occupant favored when he or she was alive. The visitors bow or kowtow to the dead who was senior to them in age.

Chinese believe that the spirit of a dead person will rise from the tomb to receive the offerings and hear what the visitors say. Though they know their loved one's spirit may have long been reincarnated for the hereafter, they still wish it is around.

They communicate with the silent spirit in murmurs telling him or her how they miss them, asking them to "not grudge" spending the "money" burnt for them and pray to them for protection of the family from ill fortune (they believe spirits have certain magic power).

Tomb visiting is not limited to the immediate family members. People also visit earlier generations, for example, their grandparents and great grandparents. In rural areas and southern China, people visit citang (clan's memorial temple) during the Qingming Festival to pay tribute to more remote ancestors, each of whom has a tablet on the altar.

People who work and live away from their hometown would set a temporary altar in their residence to pray to their deceased parents or grandparents with food and joss sticks placed in front of the portraits.

It is interesting to see the difference between westerners and Chinese people when visiting the gravesites. In the West, people usually place a posy in front of the tombstone and stand in silent memory of their loved one. That is a sharp contrast to the more bustling Chinese way. Westerners seem to set greater store by a spiritual dialogue with their passed-away kin rather than by any raucous ritual activity. And the "dialogue" is more of conveyance of love between the living and dead as two independent individuals.

No giving or requesting is involved. They don't want to disturb the dead. Chinese, however, hope to have their dead loved ones awake – that's why firecrackers are set off – to listen to them. They want the dead ones to know that they are not forgotten, that food and money are brought to them and that they are expected to protect the whole family, especially the kids.

No, don't think that this Chinese way is purely out of material concerns. In fact, it is part of Chinese culture. Chinese still take all the dead kin as members of the family. They are dead, but they are not gone. They deserve our respect, and they merit being informed of family affairs. Consultation may sound superstitious, but many people do believe that their ancestors would come into their dream with advice.

Here lies the difference between western and Chinese cultural values in terms of remembering ancestors. (Let's here forget about those who died prematurely, for, after all, most tomb occupants are people of older generations.) Westerners are individualists. They think the dead has gone and should be left undisturbed. The dead, as an individual, has endeavored all through his or her life to accomplish what he or she was commissioned by fate and now should rest in peace. Chinese are collectivists.

They believe in the strength of collectivism. They do not deny that one should struggle on one's own, but they believe that one can draw great strength from the unity of family, society, and nation. Members of one's own family, or the clan deriving from a common ancestor, are the most reliable and trustworthy. The most senior member, whether a patriarch or a matriarch, is the top authority to maintain the family bond. That is why the Chinese attach so much importance to respecting the seniors and worshiping ancestors.

Times have changed, and China is no longer a feudalistic society. Modern-day Chinese certainly do not stick to the obsolete feudalistic ethics, and they have assimilated many notions from western culture. But the tradition of holding ancestor in high esteem has not changed and won't change, for it has melted into people's blood and taken roots in the heart.

No matter how rebellious a teenager may be, he or she would not refuse to bow or kowtow in front of the tomb of a grandparent. And they do so not because they are asked by their parents but out of their genuine respect of the ancestor. When they grow up to become parents themselves, they will take their children to sweep the tombs of family ancestors every year on the Qingming Festival day.