OPINIONS How CPEC hurdles can be overcome

How CPEC hurdles can be overcome 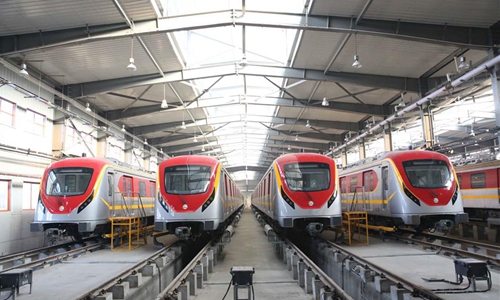 Trains of the metro train service are seen at a terminal station in Lahore, Pakistan, on December 10, 2019. (Photo: Xinhua)

China and Pakistan are all-weather strategic cooperative partners. The two countries are forging a community with a shared future in which China-Pakistan Economic Corridor (CPEC) will play a major role. The CPEC is a major pilot project of the China-proposed Belt and Road Initiative (BRI). Yet the speed of construction of the CPEC has been slowing down recently for which there are three main reasons.

First, Pakistan is hobbled by a high fiscal and current account deficit, a large foreign debt and a resulting heavy debt repayment burden. Its ability to provide support funds for CPEC has declined, and there is large financial pressure to expand infrastructure construction. IMF loans come with conditions and Pakistan will not be able to provide a large budget for the CPEC project while meeting these conditions.

Finally, the impact of international factors plays a vital role. Due to economic and financial pressure, Pakistan needs to seek IMF loans, and at the same time hopes that the construction of CPEC will be truly multilateral, with Saudi Arabia, the United Arab Emirates and other countries participating. The Pakistani government and think tanks are concerned about the current regional geopolitical situation, especially the geopolitical competition between China and the US. The Indo-Pacific Strategy adopted by the US, coordinated by Japan, India and Australia, is containing and hedging the BRI. CPEC is hence affected.

In the last few years, obstacles in the construction of CPEC can be seen in three aspects.

To begin with, the largest difficulty has to do with Pakistan's domestic politics. China has always followed the principle of non-interference, so the problem can only be solved by Pakistanis.

Moreover, some Pakistanis believe that as long as their country provides lands and China invests funds, all development problems can be solved. It's normal to hope to share the development dividend of cooperation, but it will take time for the economic benefits to accrue. China's investment also needs Pakistan's supporting facilities, including industrial park planning, water, electricity, gas, road, investment policies, tax policies, land policies and reforms of other laws and regulations. The promotion of CPEC needs the cooperation of officials and the public from both sides.

Last but not the least, the power of geopolitical and security factors should not be underestimated. A peaceful and stable surrounding environment is needed to develop the economy. With the change in geopolitical situation as the CPEC progresses, external forces have become a challenge. The Afghan peace process also has a significant impact on the progress of CPEC constructions. In addition, it should be noted that attacks on Chinese and CPEC projects are rising.

In essence, CPEC is in need of the synergies between Chinese and Pakistani development strategies. It is undeniable that CPEC will have geopolitical impact.

In the context of the complex and delicate situation in South Asia, the geopolitical influence is likely to be magnified. However, both sides should have a clear understanding of this and should not overstate the geostrategic value of the CPEC.

In order to better promote the CPEC, China and Pakistan should strengthen the exchange of ideas on development and governance. Central and local governments, and the military from both sides should improve exchanges. Think tanks should play an important role in this regard. Personnel communication and training are also important.

In order to ensure the safety of Chinese workers in Pakistan and the construction of CPEC, the Pakistani government has set up a special security force, but this does not fundamentally change the current security threat faced by the CPEC and the Chinese in Pakistan. Confronting the challenges, both countries need to work together. Otherwise, not only will the construction of CPEC be unsustainable, but also the original achievements will be wiped out.

The author is secretary-general of the Research Center for China-South Asia Cooperation at Shanghai Institutes for International Studies, a visiting fellow of the Chongyang Institute for Financial Studies, Renmin University of China and a distinguished fellow of the China (Kunming) South Asia & Southeast Asia Institute. opinion@globaltimes.com.cn