OPINIONS How much has the US offered to Hong Kong rioters?

How much has the US offered to Hong Kong rioters? 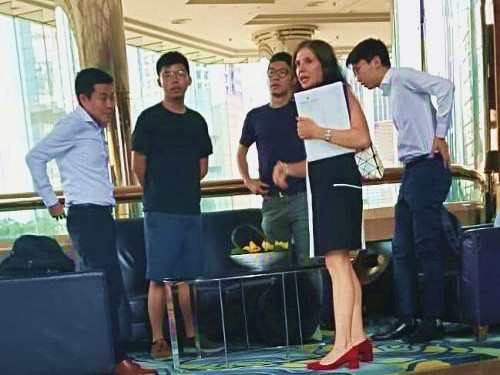 Over past weeks, repeated attacks by violent radicals in China's Hong Kong Special Administrative Region (SAR) have caused law-based governance and freedom, the two things cherished the most by Hong Kong citizens, to be trampled on the ground.

Anti-China forces in the U.S. have not only openly cheered the violent protesters on and made irresponsible remarks about the riots, but provided money, benefits, and advice to the rioters.

According to Ta Kung Pao, one of the most important newspapers in Hong Kong, Hong Kong Human Rights Monitor, a non-governmental organization (NGO) which played a vanguard role in the protests against amendments to Hong Kong's extradition law, has received funds from the U.S. National Endowment for Democracy (NED) since 1995, amounting to a total of more than 15 million HK dollars (around $1.9 million).

From 1995 to the beginning of 2015, NED, through its subordinate body, provided $3.95 million to opposition organizations in Hong Kong, as shown by a report from Wen Wei Po, a Hong Kong-based Chinese language newspaper.

In addition, data released by NED in 2018 revealed that of all the countries that NED allocated funds to, China topped the list at $6.5 million.

These figures are just the tip of the iceberg, as it's believed that most NED spending was not disclosed due to its "sensitivity".

While calling itself an NGO, NED played the role of a backstage manipulator in multiple color revolutions and has an inextricable connection with the U.S. Congress as well as intelligence agencies.

Looking back to the demonstrations in Hong Kong in recent years, it's not hard to find NED's inglorious role in these incidents. For instance, representatives of the opposition organizations of Hong Kong, including Martin Lee Chu-ming and Nathan Law Kwun-chung, went to the U.S. this May to attend and deliver speeches at a forum held by NED, imploring NED to interfere in the proposed amendments to Hong Kong's extradition law.

During the forum, an executive of NED Asian program said to Nathan Law Kwun-chung that from 2014 to 2017, he asked Law the same questions every year: What can we do for you? How can we help you?

As they expected, disturbances in Hong Kong escalated, and demonstrations were turned into violent riots and became increasingly fierce.

Ironically, when riots in Hong Kong were in full swing, Nathan Law Kwun-chung flew to the U.S. to begin his college life at Yale University. Some internet users commented that "he went to his U.S. masters to claim his reward."

According to WikiLeaks, Jimmy Lai Chee-ying, chairman of Hong Kong-based media Next Digital Ltd., is a super funder of opposition organizations in Hong Kong and the middleman between the U.S. and some forces in Hong Kong. Lai spent both money and efforts to fuel the recent protests in Hong Kong, taking a leading position in the disturbances.

As an article published on the website of German newspaper Handelsblatt pointed out, while urging Hong Kong and Beijing to exercise restraint, the U.S. itself was fanning the flames of the confrontation with advice, action and money.

The recent riots in Hong Kong are a product of the U.S., which spent substantial resources and efforts to manipulate Hong Kong.

All in all, the backstage manipulator wants to turn Hong Kong into trouble for China, to contain or stifle China's development.

It must be clear that Hong Kong is part of China. The Chinese government will never allow any external forces to interfere in Hong Kong affairs, let alone turn the city into a mess.

The U.S. had better stop such tricks, obey international law and the basic norms of international relations, make a clean break with the rioters, stop sending obverse signals to radicals, and pull back before it is too late.