OPINIONS How reform and opening-up made US uneasy

How reform and opening-up made US uneasy 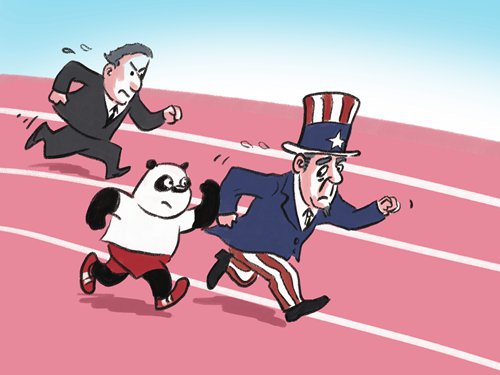 No one can doubt the success of China's Reform and opening-Up process. In fact, it has been so successful that the US is playing the victim and undertaking economic measures to counter China.

When the policy was launched by Deng Xiaoping, the world had applauded. A developing China would not only be a good market to export to but also an engine of global growth. This hope for a win-win outcome has come true.

No wonder that the international community welcomed Deng's visionary leadership and subsequent modernization. So have the Chinese people as its success has lifted tens of millions out of poverty and created a vibrant middle class.

There is a long way to go given China's huge population and requirements for growth and poverty reduction. However, increasing self-confidence among the Chinese will no doubt move the nation steadily forward.

Reform and opening-up policy is the correct path for the rejuvenation of China within the development model of socialism with Chinese characteristics. Today, the comprehensive update by President Xi Jinping has advanced the policy to a new historic stage.

But Washington is unnerved by China's success.

The recent speech by Vice President Mike Pence attacking China is a case in point. It reflects the prevailing mind-set and policy at the highest levels of the US government.

A major Pentagon policy study released to coincide with Pence's speech reveals Washington's concerns and signals aggressive action to counter China.  The study examined the state of US manufacturing and defense industrial base and found it in a shockingly poor state.

The White House and Congress blame China but isn't the situation really the fault of America's political, business and academic leaders?

In the late 1960s, it was fashionable at the Harvard Business School, on Wall Street, and in academia generally to promote the dangerous and misleading idea that the US would cease to be a manufacturing country and should instead become a "service" economy.

Today, Washington recognizes the results of such folly, calling for the replacement of America's traditional productive capitalism with speculative finance capitalism.

In the late 1970s and 1980s, Washington's reaction to Deng's new policy was favorable. Today, Washington is semi-hysterical about a perceived "China Threat" as the Pence speech demonstrates.

In the 1990s, president Bill Clinton correctly recognized that with the end of the Cold War a new economic policy, including a progressive industrial policy, was needed. "Competitiveness" became the talk of the town in Washington and all manner of studies and pronouncements were made.

It was said that the US must upgrade itself to compete in a more complex world. This was correct but not much came of this flurry of Clinton era ink and words. Conservatives castigated "socialist" ideas about a national industrial policy and were only too happy encouraging Corporate America to invest in low wage production outside the US.

Meanwhile, the world naturally moved on toward multipolarity, diversity and pluralism. Europe continued building and modernizing. Russia began to recover. Asia began rising and this phenomenon included not only China, but also Southeast Asia, South Korea, and India.

To put things into historical context, China and India were the two largest economies in the world five centuries ago. That was before the plunder of the world by European colonialism and imperialism. Today, China and India are recouping their old economic status not to mention the position they enjoyed among world civilizations.

Washington and US elites have a hard time with this.

The Pentagon report on a deteriorated US industrial base clearly demonstrates the failure of US leaders to develop a forward looking national policy.

America's distress is not the fault of China's successful reform and opening-up policy.

US leaders must desist from hegemony as a policy and honestly face up to the socio-economic crisis in the US and its manufacturing decline.