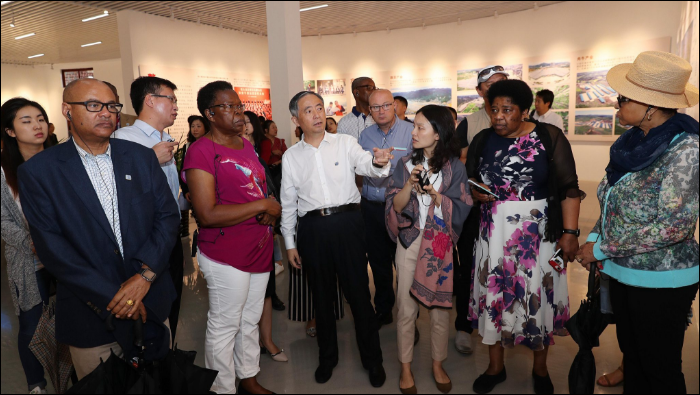 In March 2013, President Xi Jinping put forward the concept of China-Africa “Community of Destiny,” encouraging China and African countries to join hands in furthering mutual political trust, mutual assistance in development, and mutual emulation of the modality of development.

Five years on, the international community continues to witness new landmarks across the continent of Africa. Both sides have kept the momentum of economic growth, and both have benefited from win-win cooperation, in line with the principles enshrined within the China-Africa Community of Destiny.

The African Union Conference Center, which was built with support from the Chinese government, has become the landmark for the China-Africa friendship. Both sides are increasingly becoming partners in common development.

By 2017, China has, in collaboration with African countries, built some 5,600 kilometers of railway and 4,500 kilometers of highway. The two sides have collectively constructed 64 power plants, many bridges, seaports and airports, all of which have been contributing to the improvement of the infrastructure across the continent.

Moreover, the bilateral industrial cooperation has helped many partner countries to uplift their manufacturing capacity and increased their capacity to foster foreign trade.

Up until now, China has invested more than 50 billion US dollars in Africa, primarily in the areas of civil construction, manufacturing, mineral resources development, finance and technical services.

In 2017, China-Africa trade stood at 169.7 billion US dollars, which has turned China into the most trusted trade partner for Africa. Meanwhile, China has contributed more than 30 percent to economic growth across the continent, which has, in turn, helped Africa become the fastest growing continent in the world, in spite of the volatile economic, trade and investment situation.

Nevertheless, the era of the post-2008 international financial crisis has brought both China and African countries to a crossroad in terms of economic development.

Both sides are facing a fierce international market, which has brought enormous pressure on trade growth. Both sides have to face tough competition for FDI as the developed countries have stepped back from their historical responsibility to serve as the engine of global economic growth, market access as well as the source of FDI.

Both sides are under new challenges as the developed countries are bending backward in signing “next generation” trade deals, which have erected new barriers for developing countries.

Against the aforementioned backdrop, China and African countries have to double their efforts to promote the construction of the community of destiny.

Firstly, the two sides should dedicate more efforts to the connectivity of the BRI and the master plan of the dream of continental rejuvenation chartered by the AU, which would help solidify the new consensus on common development among African leaders, politicians, business communities and people across the board.

China should sign more trade and investment deals with partner countries, in an effort to create an ideal environment to attract Chinese capital.

Secondly, both sides should commit more financial resources to jointly construct transportation and post-telecommunication networks across the African continent, which would help to connect the still geographically divided national markets.

This would go a long way to prop up the capability of African countries to boost their local and foreign trade, especially exports to China, effectively reducing the trade imbalance between Africa and China.

Thirdly, both sides should step up industrial chain cooperation, which would help partner countries to increase their economic and social benefits, in terms of natural resource development as well as the readjustment of their economic structures.

Both sides should readjust their industrial policies, in order to encourage more Chinese companies to extend their production chains or the production lines onto the continent, which would facilitate conditions for the African partners to take stock from the Chinese capital, technology, machines, standards and managerial know-how.

More importantly, the closer industrial cooperation would help African countries upgrade their economic structure as well as their industrial capabilities.

Fourthly, both sides should earmark more industrial parks or free-trade zones, in order to encourage more Chinese companies to go in clusters.

Both sides should provide policy and economic incentives for the Chinese companies to transfer mature technologies on a commercial basis, in order for the latter to pump up their industrial competitiveness both at home and on the international front.

Last but not least, both sides should dedicate more efforts in human capital resource development, and create more opportunities for the young people on both sides to study or receive further education in the respective countries, which would provide the badly needed talents for the companies in China or relevant African countries, consolidating the human foundation for the joint construction of the community of destiny.