OPINIONS How the Catalonia vote threatens the EU

How the Catalonia vote threatens the EU 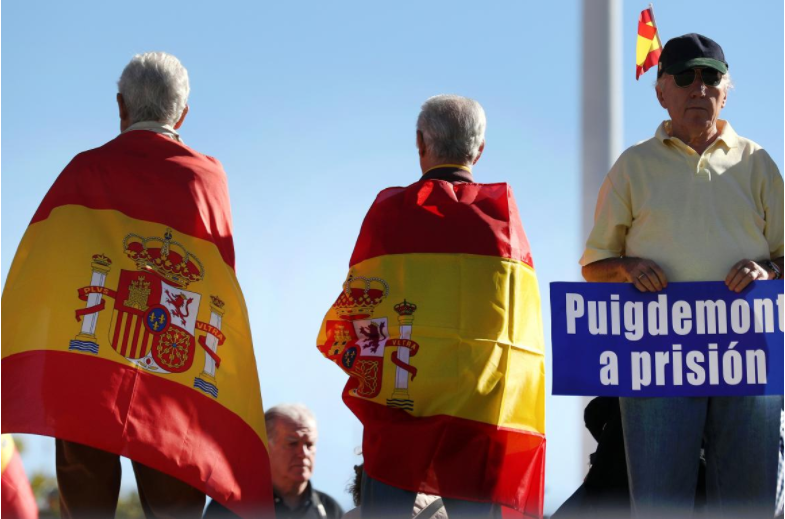 Supporters of the Spanish government call for the imprisonment of sacked Catalonian President Carles Puigdemont at a rally in Madrid, Spain, October 28, 2017. REUTERS/Sergio Perez

The struggles for and against independence in the Spanish province of Catalonia are emblematic of the European Union’s present strength and its future weakness. They also display the weaknesses, present and future, of the two leaders of the contending parties: Mariano Rajoy, the Spanish prime minister and Carles Puigdemont, president of Catalonia.

The declaration of independence made by Catalonia’s parliament a week ago was constitutionally illegal. Shots of huge pro-independence rallies obscure the fact that, in an opinion poll in the summer, 49.4 per cent opposed breaking away from Spain while 41.1 per cent supported it. Unionists have held their own large rallies and a new poll in El Mundo shows their parties with a slight polling lead in the December Catalan elections.

The parliamentary vote for independence – taken in a half-full chamber after the anti-independence parties left in protest – was swiftly followed by Rajoy, fully backed by his parliament and senate, ordering the parliament’s dissolution and the sacking of Puigdemont, who fled to Brussels. Nine of his colleagues in the Catalan leadership were accused in Spain’s high court on Thursday of rebellion, sedition and misuse of public funds, eight of whom were detained in custody. Puigdemont has said he will return, but only if given guarantees of a fair trial.

Strong support in the rest of Spain for a hard line against Catalonian independence masks a longer-term problem for Rajoy and his country. The prime minister heads a minority government, unable to find a stable coalition partner. In July, Rajoy became the first serving prime minister to testify in court, denying allegations that he was complicit in a wide-ranging corruption scandal in his center-right Peoples’ Party, investigations which have dragged on over the past two decades. Rajoy himself has not been charged.

Thus a national leader with a weakened base faces Puigdemont, a regional leader who has weakened his own base by flight. Puigdemont may not be the man to lead Catalonia to independence, and it may not presently be in the cards. But it will remain a strong current in Catalan politics and is indicative of the larger problems within the EU that threaten the integrity of the Union at least as much as Brexit. 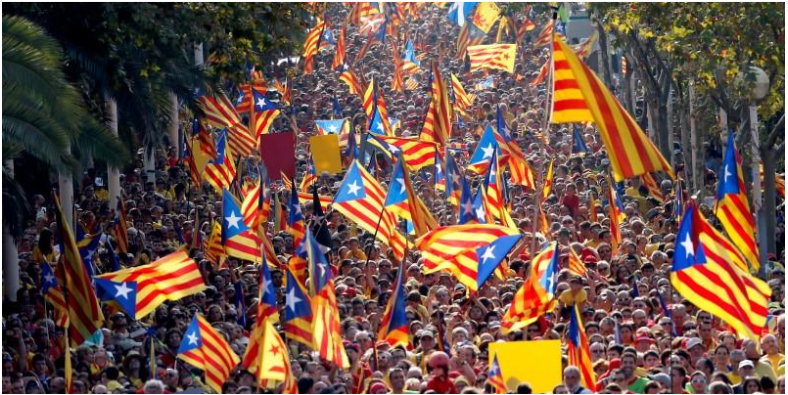 In country after European country, the trend away from the center continues and presently grows. As the Washington Post’s Ishaan Tharoor observes, most nationalisms are not only championed by aggressively right-wing leaderships and parties mobilizing a largely working- or lower-middle class electorate fed up with being left behind. “Another trend to watch ought to be the impatient regionalism of more metropolitan parts of Europe, frustrated by the backward politics of their nation-states,” writes Tharoor.

The rich defectors are led by Catalonia, Spain’s most productive region and the one with the strongest independence movement. Catalan separatists argued that paying less in taxes to the Spanish government would be an economic boon to the province. But others now show signs of wishing to join, or at least look at the entrance fees, of the wealthy breakaway club. Most surprising – since it is part of the relatively successful German economy – is the southern state of Bavaria: in July, a poll for the popular tabloid Bild showed one in three favors independence.

Last month, the northern Italian regions of Lombardy and Veneto, the two richest of Italy’s 20 regions, accounting between them for some 30 per cent of the nation’s GDP, voted overwhelmingly for more autonomy. The Liga party, strong in the area, had a policy of independence. That’s now moderated, but there’s growing dissatisfaction that the region’s taxes are poured into the much poorer, much less productive south. The division amounts to two separate economies, a problem which feeds northern separatism. 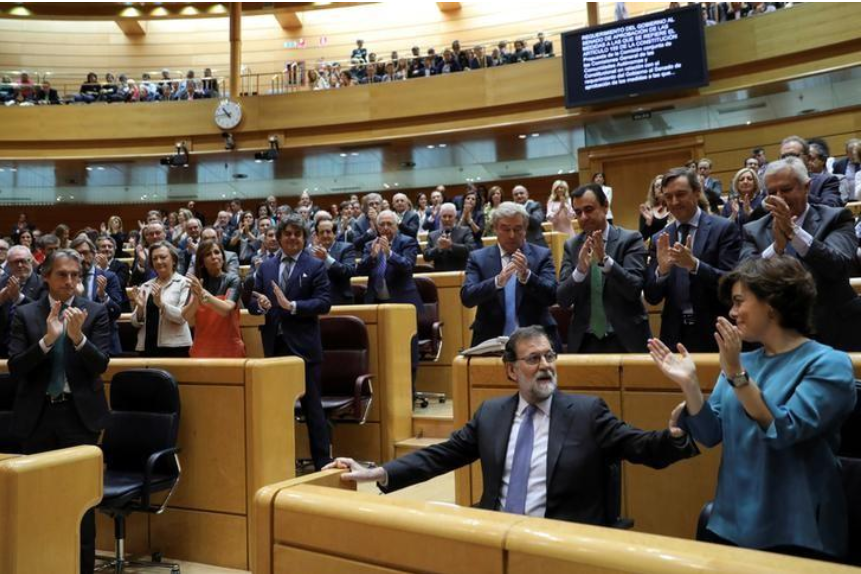 Spain's Prime Minister Mariano Rajoy is applauded by his fellow People's Party (PP) members in the Senate in Madrid, October 27, 2017. Rajoy fired the Catalonia cabinet after it declared independence from Spain. REUTERS/Susana Vera

Even in Belgium, the administrative heart of the EU, the tensions are showing. The divided reaction to Puigdemont in Brussels – with a Flemish nationalist cabinet minister welcoming him, while the prime minister, from the French-speaking Walloon area showed a cold face – was a glimpse into the fractured politics of the Belgian state. The center has given away much of its power to the two main regions in an effort to avoid a complete split – and will be pressed by the richer Flemish region to do still more after national elections in 2019, to the point where the central state will cease to exist.

Scotland, whose devolved parliament is dominated by the Scottish nationalists, has seen a dimming of enthusiasm for independence as its offshore oil reserves and the income from them have ceased to promise a wealthy future, as even its own economic commission has admitted. A botched Brexit, however, could revive the movement among a population which voted decisively for remaining in the EU. France, where the economy is reviving, still has independence movements in the island of Corsica (where nationalists now control the regional assembly) and the western region of Brittany, where support is still a minority pursuit, but growing. (Brittany and Corsica have roughly average per capita GDPs for France; their independence movements are more cultural than economic – though all nationalist movements invoke some cultural difference, often rooted in centuries’ old histories.)

The EU cannot look on these movements with anything but disfavor and alarm. Though the rich breakaways would – as Catalonia does – wish to remain in the EU, a general exodus would face the union with its largest crisis yet. Were a region to succeed in forming a viable independent state, it would be required to apply for membership. Its application would not be considered until all legal and territorial issues had been settled with the country of which it had been a part – a process which might consume a decade until the application was successful. 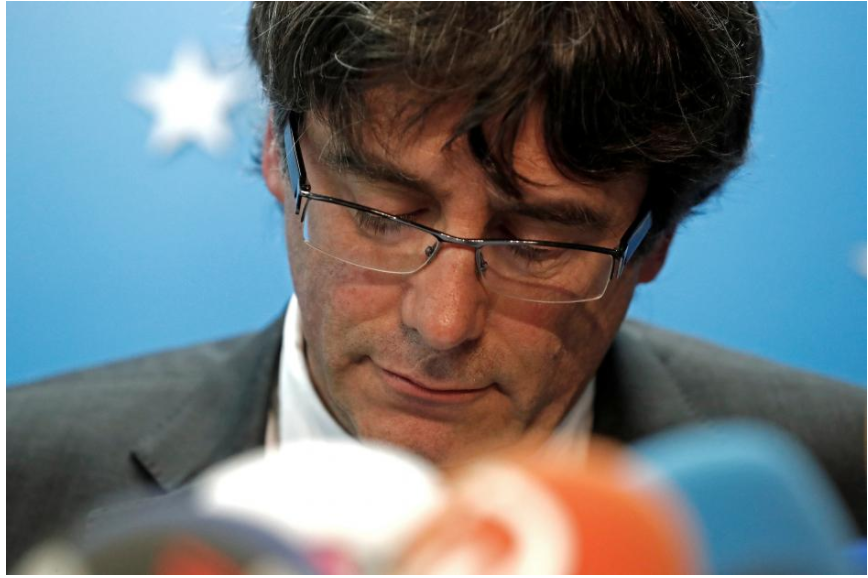 The widespread distrust of mainstream politicians and central governments, and the conviction that local populists would do a better job, now takes a concrete and threatening form. Nationalism, which the EU had wished to see fade, even die, now instead revives, sometimes – as in Central Europe – in illiberal, even authoritarian, forms.

The EU is less and less seen as an ideal, a borderless federation-in-the-making. Its processes – remote, intricate and little understood – lose out when contrasted with the warmth and intimacy of a new-old country which can draw on its history and culture, keep out unwanted immigrants and restore pride and trust. Such is the promise of many of the new nationalisms: the EU can disapprove, but in its still-fragile state can do little except to hope that the nationalist tide will retreat. For the moment, it’s still rising.