OPINIONS How Trump can get over his slump

How Trump can get over his slump 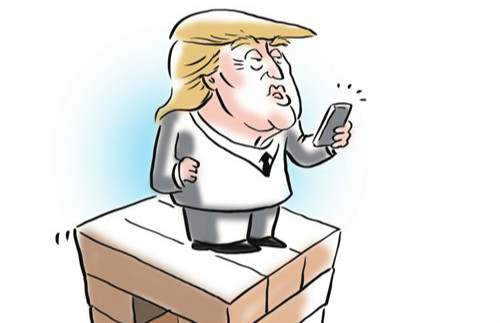 Scholars, business elites and the public are concerned about US President Donald Trump's influence on the new international order and global governance. Also the effects of "Make America Great Again" on the stock market and investment, and the repercussions of Trump's policies on immigration, education and tourism are worth exploring.

Used as a barometer for politics, the concept of approval ratings is a criterion used to judge the performance of the president. Statistics from Gallup suggest that Trump's average popularity rating for the third quarter of the year was only 36.9 percent, far lower than the performances of previous presidents - 53 percent on average between 1938 and 2017. Trump's low popularity has already surpassed factionalism, as he was disapproved by 22 percent of his Republican colleagues. It seems likely that Trump could be impeached as a result of public disapproval and pressure from Democrats.

Washington's tripartite political system means that the president's executive power is constrained by the Congress and the Supreme Court. The US Constitution provides that "The President, Vice President, and all civil Officers of the United States shall be removed from Office on Impeachment for, and conviction of, Treason, Bribery, or other High Crimes and Misdemeanors." There have been three presidential impeachments in US history - Andrew Johnson, Richard Nixon and Bill Clinton.

The Democratic Party has been increasingly vocal in the call to impeach Trump. In November, House democrat Steve Cohen and his five other colleagues filed articles of impeachment against Trump that included an obstruction of justice in Trump's decision to fire former FBI Director James Comey, two emoluments clause violations, undermining the independence of the federal judiciary and undermining the freedom of the press.

Yet the Republican Party has a majority of seats in both houses of Congress, and thus there is little chance for the impeachment to be passed.

If Trump's approval rate keeps hanging at such a low level, the Democratic Party may win the 2018 midterm election and then would have enough seats to control both houses of Congress and launch new charges of impeachment against Trump.

Above all, Trump's approval rate is unlikely to rise unless the president changes the way in which he governs. In spite of advice from those within his circle, Trump still carries on in his own fashion, all the while calls urging him to resign become louder. Yet Trump is highly skilled in influencing others and still can hold onto his position if he manages to undertake the following.

Properly handle family businesses so as to avoid accusations of abuse of power for personal gain, define a clear boundary for his children involved in politics and cut their involvement with the White House to avoid being embroiled in scandals, win the midterm election and secure the Republican Party's control in Congress and the Senate, make peace with the opposition party. And last but not least, better craft his Tweets to up his approval rating.