OPINIONS How will Europe dance with populism?

How will Europe dance with populism? 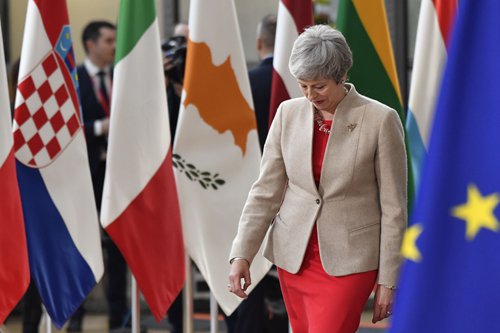 Elections to the European Parliament have come to an end. The good news is that it has gained unprecedented attention and seen a high turnout. The reason why the world seemed fixated on the electoral exercise is that it was regarded as a "confrontation" at the EU level between mainstream European political parties and populist forces, arousing huge interest among the electorate. The phenomenon is intriguing: EU politics has seen tepid public participation and the expansion of "democratic deficit" for many years. But when the bloc encounters real political challenges, the "democratic deficit" seems to narrow and European parliamentary elections acquire center stage - a repudiation of the image of "secondary elections." However, it seems that bad news outweighs the good: the political polarization and fragmentation that has occurred in most European countries in recent years has spread to the EU level. The position of the center-left and center-right parties as traditionally dominant forces has weakened, and the liberals, Greens and the far-right are gaining power. The general European public reaction to the result is to take it easy, because the situation is unexpectedly "not too bad." It does not appear that populist parties occupy even a third of the seats but the results of the election will still bring new problems to EU politics. For example, the increase in strength of the Liberal parties and the Green parties will lead to a more intense interplay between the mainstream parties and affect the recombination of the subsequent forces, the most important result of which is the election of new EU leaders. At the same time, the populist forces that won a quarter of seats have not only consolidated their position but also expanded their reach. If the "video scandal" of the Austrian Freedom Party did not break out during the vote, its performance may have been even better. The end of the European Parliament elections kicks off the political game for the next five years. At the EU level, although optimists say that populist parties do not have the power to challenge mainstream parties in the European Parliament and it is difficult for them to create tangible obstacles in legislation, budget review and EU decision-making, they will show their existence and interfere with the proceedings of the European Parliament by raising technical issues. At the same time, the consolidated and expanded political territory of the populist parties will push European politics to the right. At the domestic political level, although the European parliamentary election is different from domestic elections and it is unlikely that the results are similar, the current situation is that populism has become entrenched in Europe and gradually seeped into public opinion. It is not empty talk that populist political parties, gaining momentum, are eager to replicate the results of the European Parliament in national elections. Long-term coexistence with populist and non-mainstream parties will become a "new norm" in EU politics and domestic politics of European countries. Of course, there is another important point to consider - how would European and American politics influence each other. US President Donald Trump and his former top aide Steve Bannon are obviously happy to see the burgeoning populism in European politics. In turn, the European populists' success will provide Trump with a strong basis for seeking another term.The new political landscape reflected in European Parliament elections would give rise to uncertainty and turmoil. The rivalry between the EU and each member state will rise. Cooperation and reconciliation will take a beating and the process of deliberation and decision-making will become more complicated and inefficient. The contradiction between democracy and governance will intensify. A more realistic concern is how the new ecology of European politics will influence policy. Despite the slogan of "maintaining European values" in recent years, mainstream political parties in the EU have still compromised with so-called public opinion and have been following populism. For example, in the name of a level playing field, trade protection and investment barrier could be regarded as an extension of the internal political changes in EU foreign policy.As an important partner of the EU, China is concerned about the political dynamics in the continent and how the EU will coexist and dance with populist powers in the next five years, because the close relations with the EU has made China feel the impact of these changes on relations with the bloc. After various political forces have entered the EU political arena with various solutions, China expects to see the EU become more mature and stable in the process of "co-existence and dancing," with a clearer direction of integration, stronger sense of responsibility toward partners and more contribution to the stability and development of the world, not the other way around.