OPINIONS How will new US government shape China-US relations?

How will new US government shape China-US relations?

Editor's note: Sun Chenghao is an assistant research professor at the Institute of American Studies under the China Institutes of Contemporary International Relations based in Beijing. The article reflects the author's opinion, and not necessarily the views of CGTN.

The national flags of the US and China. /VCG

The 117th US Congress will convene on January 3, 2021, and it will formally certify Joe Biden's election victory three days later. After Biden finally takes power on January 20, US foreign policy shall go through some relatively obvious adjustments.

Some people described Biden's policies as a sharp reversal of Donald Trump's, to achieve "anything but Trump". However, Biden still faces many challenges in trying to upend Trump's foreign policy including China policy.

Biden and Trump's foreign policy are not completely different. Their ultimate goals coincide in maintaining US hegemony, but there are differences in the way and approach of achieving it. Biden and his team believe that during Trump's tenure, the international system constructed carefully by the US has been falling apart, and American credibility and influence in the international community have been weakening. Therefore, restoring America's leadership in the world will be Biden's main focus.

As for China policy, the temporarily vanished voice of prudence in the US may be re-activated, and some subtle changes may usher in China-US relations. However, the overall US policy towards China will not change, and the relationship between the two countries will not return to the state during the Obama administration. Competition will still be the mainstream of US policy, but there are some differences in terms of the approaches. In addition, as far as the policy orientation of the new generation of the Democrats is concerned, many of them support keeping Trump's "effective" strategy on China, rather than completely overturning it.

The biggest challenge for Biden to adjust China policy is the constraint from the new Congress. First, the new Congress will not change its anti-China attitude and possibly further poison the atmosphere. During the Trump administration, the Congress has passed numerous anti-China legislation on issues of Taiwan, Hong Kong Special Administrative Region, Xinjiang Uygur Autonomous Region, and Tibet Autonomous Region which are all sensitive issues in bilateral relations. The China hawks are still there, and many anti-China acts are waiting for going through the procedure after the new Congress is in place. 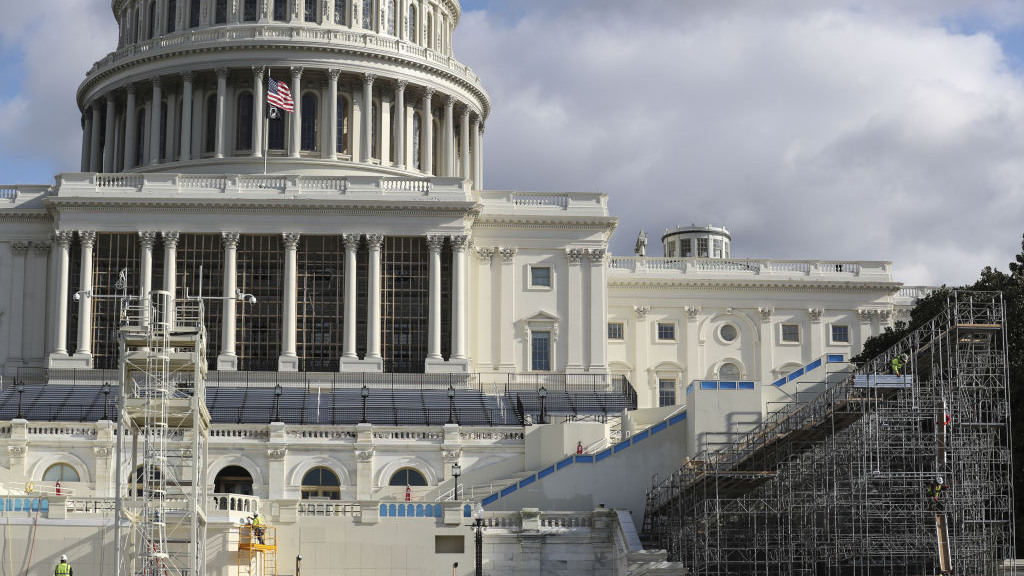 Construction on the West Front of the US Capitol in preparation for the inauguration ceremony of President-elect Joe Biden in Washington, D.C., US, December 22, 2020. /Getty

Second, with a possible slim majority in Congress, Biden lacks room to bargain on China issues. When Donald Trump became the president in 2017, he owned a sold political basis to wield power and push forward his domestic policies. Biden may not have such a honeymoon period if the Democrats could not win both Senate election runoffs in Georgia. His capability to deliver a bold agenda will be greatly constrained by his status as the first president in more than three decades to take office without his party controlling both chambers of Congress. A semi-lame-duck status might force the president to concede more on China issues in return for the Republican's support on his domestic agenda including fighting COVID-19 and revitalizing US economy.

Third, Biden and the Democrats are not willing to entirely abandon Trump's legacy of China policy. Biden must not only break the shackles of Trump's China policy, but also accept the bipartisan strategic consensus on China. The new generation of the Democrats have realized that Trump's tough policy toward China was not completely invalid, and it made some progress that the Democrats hoped for but didn't accomplish. For example, in terms of tariffs on China, Biden is unlikely to relax it in the short term, but to continue using it to force China to make concessions.

Therefore, it is better to be cautiously optimistic on changes in China-US relations after the new US government forms and the new Congress convenes. On one hand, Biden's China policy will return to a bit of rationality and the administration is likely to restart the high-level strategic dialogues between the two countries beyond the economic and trade talks. The Biden administration might also restore some of the cultural and people-to-people exchanges and seek cooperation on global governance such as combating COVID-19, tackling climate change and recovering global economy.

On the other hand, Biden's priorities before the 2022 midterm elections will be his domestic agendas. The China issues might be used as a bargaining chip to negotiate with the Republicans. It is the easiest way for Biden to make some minor changes to Trump's "strategic competition" framework towards China, adding some calibrated cooperation from the US strength without fundamentally altering the course to deal with China.