July 21, 2020 marked the 30th anniversary of the establishment of diplomatic relations between China and Saudi Arabia. Relations between the two countries have been steadily moving forward in all areas over the last three decades. The reasons for this progress are numerous, but the most important is mutual respect for the values of the other side. 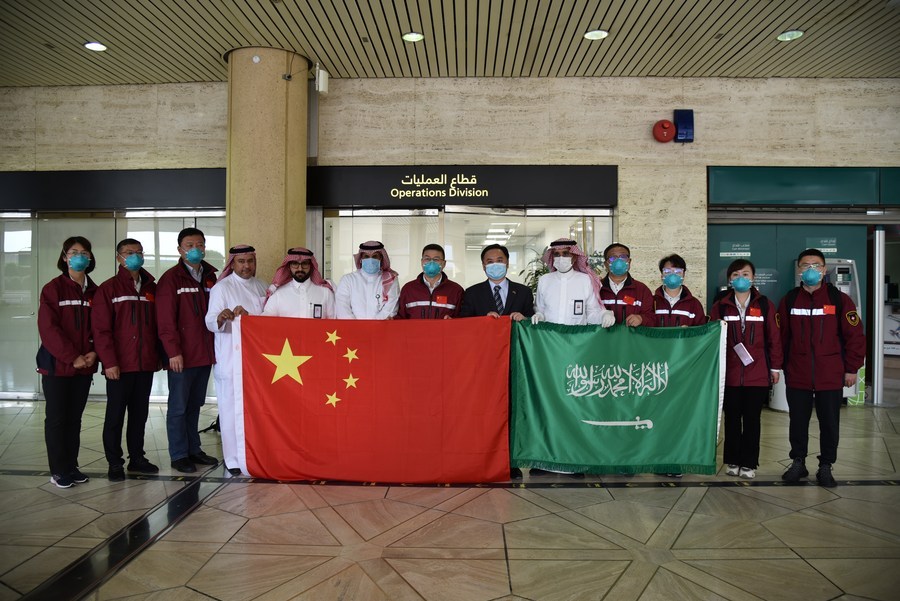 Chinese medical experts pose for photos with others at the King Khalid International Airport in Riyadh, Saudi Arabia, on April 15, 2020. [Photo/Xinhua]

History has proven that this decision could not have been more right, with relations between the two countries going on to develop in an all-round manner. For instance, China and Saudi Arabia have become very important economic partners. In 2019, Saudi Arabia exported 1.67 million barrels of oil per day to China, marking an increase of 47% year-on-year, becoming China's largest supplier of oil. In addition, China regards Saudi as an even more important destination for its commodities and infrastructure investments.

Commitments made by the two countries to cooperation in implementing the Belt and Road Initiative (BRI) and the comprehensive strategic partnership have added new momentum to the development of bilateral relations. This cooperation has also achieved substantial progress over the past couple of years as the two sides vowed to align the BRI and Saudi 2030 Vision. During a visit to Saudi Arabia by a high-level Chinese delegation in August 2017, the two sides agreed to build a Chinese industry park in Saudi Arabia's southern border region of Jizan, push forward a sea water desalination project, and support the construction of a power plant in the country's western coastal town of Rabigh.

Since the COVID-19 outbreak began, cooperation between the two countries in fighting the pandemic has seen a growth in trust. Saudi Arabia was among the first countries to deliver political and material support to China when China was facing unreasonable criticism. In return, China also supplied Saudi Arabia with medical supplies and shared expertise when Saudi Arabia saw a serious outbreak of the disease.

China-Saudi relations have witnessed robust development over the past 30 years in almost every area. Such solid development of bilateral relations can be attributed to a range of reasons.

One is the rising trend of globalization, which has allowed the energy trade to form a cornerstone in relations between the two countries. The most important reason, however, is the mutual respect for the civilization and culture of the other side. China has always adhered to the principle of respecting the diversity of civilizations and cultures. In terms of Sino-Saudi ties, China has shown respect for not only Saudi Arabia's culture, but also its overall development path. Thanks to this mutual respect, relations between the two nations will climb to even greater heights, making key contributions to regional and world peace and stability, as well as development and prosperity.