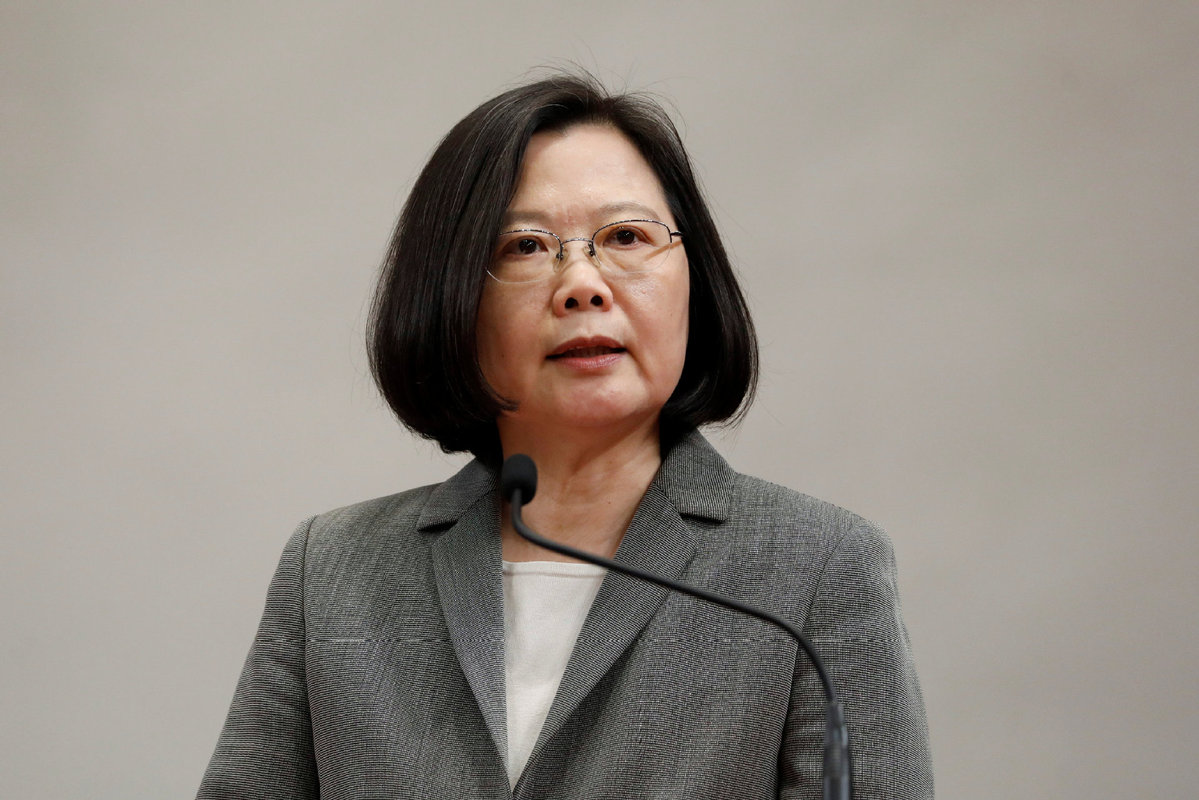 With her ruling Democratic Progressive Party suffering heavy losses in the local elections in November last year, Taiwan leader Tsai Ing-wen's position has become untenable. She was even challenged by Lai Ching-te in the race to choose the DPP candidate for the island's leadership election.

To retain her leadership position, Tsai is trying to cover her governance failures by shifting the focus to other issues. And the violence unleashed by demonstrators in the Hong Kong Special Administrative Region against the now-dead extradition bill suits her purpose, as she probably believes it can be used as a weapon against the Chinese mainland to garner popular support on the island.

Since the DPP came to power in 2016, cross-Straits relations have changed from peaceful development to confrontation, significantly damaging the livelihoods of Taiwan residents. Voters expressed their anger with the Tsai administration by rejecting the DPP candidates in the local elections in November, which dealt a serious blow to Tsai.

First, the pro-independence Tsai, unable to boost the island's economic growth and address Taiwan residents' concerns, has resorted to political tricks to cover her failures.

Tsai managed to defeat Lai in the race for the DPP's candidacy for the island's election by hyping up the protests in Hong Kong using fake news to mislead her party members. Her moves suggest she intends to continue using the Hong Kong protests to win over competitors from rival parties in order to win a second term.

Second, Tsai is interfering in the SAR's affairs to help the United States win brownie points in its trade conflict with the mainland and get the US' support in return to be re-elected. By voicing support for the rioters in Hong Kong, Tsai intends to prove they share the same ideology as the US and show the island's strategic value for Washington against Beijing. The DPP even claims to have provided the Hong Kong demonstrators with "humanitarian aid".

Considering the mainland's warning to separatists on the island, the Tsai administration is eager to seek a patron to realize its political goals, and it has found one in the US. More important, she believes that by supporting the violent Hong Kong demonstrators, she can help the DPP win the election defeating its biggest rival Kuomintang, which favors promoting cross-Straits economic exchanges based on the 1992 Consensus that there is only one China, and both sides of the Straits belong to China, that Tsai refuses to recognize.

By twisting the facts about the SAR to its benefit, the Tsai administration is trying to alienate its political rival from the mainland, further squeezing the space for Kuomintang to promote cross-Straits policies for the benefit of Taiwan residents.

Third, by supporting the Hong Kong demonstrators, Tsai is attempting to malign "one country, two systems" and seek "Taiwan independence".

After President Xi Jinping proposed that political parties and compatriots on both sides of the Straits uphold the 1992 Consensus, oppose "Taiwan independence", and conduct democratic consultation on the "one country, two systems" principle for peaceful reunification in a speech on Jan 2 to commemorate the 40th anniversary of the Message to Compatriots in Taiwan, Tsai became so nervous that she started looking for excuses to tarnish the "one country, two systems" principle. And she found in the Hong Kong protests one such excuse.

As part of her game plan, the island's administration refused to sign an extradition bill with the Hong Kong SAR government to extradite a Hong Kong fugitive who killed his pregnant girlfriend in Taiwan to stand trial in the SAR.

The Tsai administration has also been spreading lies－that the protests in Hong Kong signify the failure of the "one country, two systems". By lending support to the Hong Kong rioters, Tsai is trying to bring Taiwan and Hong Kong separatists together to gain political mileage and prevent national reunification.

Tsai has been fanning the flames of violence in Hong Kong and is likely to continue playing her dirty game. But compatriots on the island will not be fooled by her trickery for long, especially if their livelihoods are at stake. And the DPP will never succeed in severing cross-Straits relations.

The author is a professor at the Institute of Taiwan Studies, Beijing Union University. The views don't necessarily represent those of China Daily.