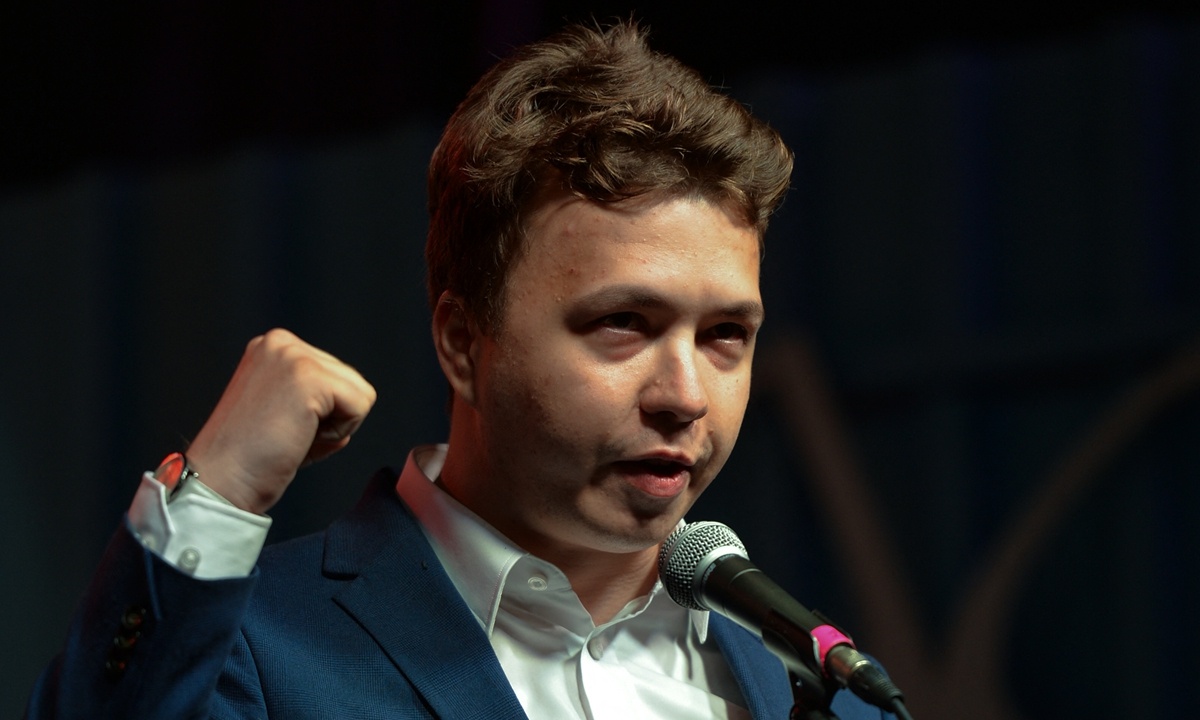 After Belarusian opposition activist Roman Protasevich was arrested when his Ryanair flight performed an emergency landing in Minsk on Sunday, the European Union (EU) reacted quickly with a leaders' meeting. The European leaders agreed on Monday night to impose sanctions against Belarus and to ban aviation over the country's airspace.

Before the meeting, European Commission President Ursula von der Leyen said a 3 billion euro EU investment package for Belarus will remain on hold and frozen until the country turns "democratic."

The problem between the EU and Belarus is mainly geopolitical and political divergence. Minsk was once seeking a balance between Brussels and Moscow. When there were rumors that Belarusian President Alexander Lukashenko and Russian President Putin didn't get along with each other personally, the EU tried to take the chance to promote "democratization" in Belarus, in a bid to realize the bloc's goal of politically reshaping Eastern Europe. But as Belarus and Russia get themselves together, the EU's plan has failed.

The EU then resorted to sanctions on Belarus: It had already imposed three rounds of sanctions, and was working on a fourth round. The bloc started with restrained moves to avoid directly affecting Belarus' economy and people's livelihood. But the sanctions have been upgraded due to the surge in louder voices within the EU. Nonetheless, the EU's decision to ban Belarusian airlines from flying over the bloc's airspace or landing in its airports is evidence that sanctions cannot address the problems between the two sides.

However, given what the EU really wants, the bloc's moves toward Belarus go against its goals.

Cui Hongjian, director of the Department of European Studies at the China Institute of International Studies, told the Global Times on Wednesday that spreading "democracy" to other countries has been the aim of the EU. When the bloc develops trade and economic cooperation with countries that are not core countries in the West - like Belarus and Russia - it emphasizes the political standards and a push to turn them "democratic."

"But this approach, in effect, may offset the EU's purpose. Emphasizing democracy and human rights when developing relations with other countries inherently shows an intention to interfere in their internal affairs," Cui noted. "In countries bordering the EU, especially in countries like Belarus, such a measure to promote democracy will be boycotted, to a small or large extent."

As the EU is eager to show its influence and ability in the geopolitical field, the bloc's foreign policy has begun to become radical. Against this backdrop, the bloc can hardly step back in this latest discord with Belarus.

In addition, as the EU's pursuit in the geopolitical sphere continues to increase, the bloc is likely to pile more pressure on countries bordering it. Both human rights and democracy will be EU's main tools.

When the truth of the landing and the arrest was still unclear, the EU lashed out. Apparently, the bloc wished to do something as soon as possible to demonstrate its political power. But such moves can hardly be regarded as being responsible. Even though the EU might achieve some political gains in the end, in terms of economy, trade, security or even politics the bloc increasingly values, what it will eventually get will be discounted. This is clearly contrary to the EU's own interests.