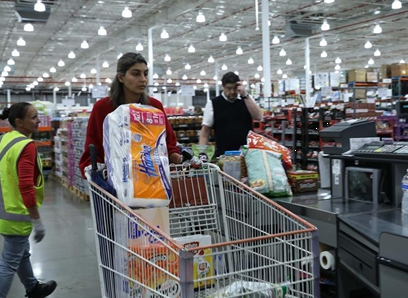 Residents do shopping in the supermarket Costco in Canberra, Australia, March 4, 2020. (Photo: Xinhua)

The COVID-19 pandemic is indiscriminately afflicting the world, requiring all countries to maintain concerted efforts to combat the disease, rather than stirring up racial hatred and ideological conflict.

In late January, the rampaging COVID-19 outbreak in China required medical professionals and the whole society to fight the spread of the coronavirus even though there was a severe shortage of personal protective equipment (PPE) including surgical masks, protective suits, and even latex gloves. During these tough times, governments, organizations, businesses and individuals from around the world came to the rescue to provide invaluable resources and support.

To the dismay of many Chinese people in Australia, the Australian newspaper, Sydney Morning Herald, published two reports on March 25 and 26 respectively, which maliciously distorted facts and context by unfairly and falsely correlating the early-stage emergency aid to Wuhan by some businesses in Australia, to the current shortage of masks and other sanitizing and medical supplies in Australia.

The first report claimed that the Chinese property giant Greenland Group sourced bulk supplies of medical items to be shipped back to China in January and February, while the second report stated that another Chinese company, Risland, flew more than 80 tons of medical supplies on a corporate jet to Wuhan in late February.

The donations were sensationally described by other Australian media outlets as "raiding and draining" Australia's essential medical stockpiles that were "pillaged" and sent to China.

The charitable donations from individuals and organizations from various countries, including Australia occurred in late January and February when China was fighting the virus. The Herald reports have distorted the facts to make innuendo to suggest some China-related businesses are still buying and hoarding PPEs to ship back to China, resulting in the local scarcity.

The facts reveal that the recent COVID-19 outbreak in Australia has been virulent, causing local panic buying in many cities and towns, resulting in a drain on inventories of supplies around the country. Although Australia confirmed its first case of coronavirus on January 25, it took the Australian people more than a month to fully realize the seriousness of the virus and begin to take precautions. The fallacious accusation that donations to China caused the current shortage of local supplies reflects "China threat" mythology long upheld in the West by those still confined by the outdate Cold War mind-set.

In the early stage of China's virus fight, the donation of the PPEs it received not only protected frontline medics, it boosted hope and morale. When China achieved a phased victory of epidemic fighting, the country has stepped up efforts of production resumption and tried to return the kindness it received from the world.

The Chinese government has offered over 80 countries and international organizations emergency assistance to fight the coronavirus pandemic, sent seven teams of medical experts to five badly hit countries including Iran and Italy, and held dozens of video conferences with various countries to share experiences as of Thursday.

The global pandemic is not local or regional. It transcends borders and threatens the entire human race. A global existential crisis calls for global efforts. At this most challenging time, it undermines the global joint virus fight if one continues stirring up political biases and prejudices.