OPINIONS Immoral to boost reelection by attacking WHO

Immoral to boost reelection by attacking WHO 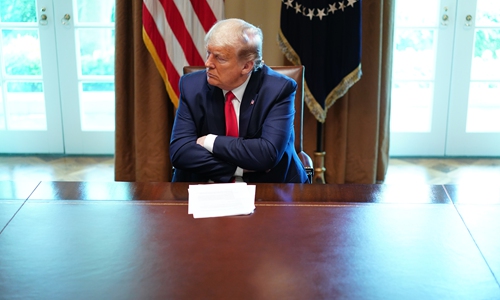 US President Donald Trump speaks during a meeting with patients who have recovered from the novel coronavirus, COVID-19, in the Cabinet Room of the White House in Washington, DC on Tuesday. (Photo: AFP)

US President Donald Trump announced Tuesday that Washington was suspending funding to World Health Organization (WHO) while reviewing over the organization's "role in severely mismanaging and covering up the spread of the coronavirus." Since last week, Trump has launched a barrage of attacks on WHO, accusing the organization of being "China centric."

Mainstream public opinion both in the US and abroad believes Trump is anxiously making WHO a scapegoat to divert increasingly fiercer domestic criticisms for his botched epidemic response.

It should be taken as part of Trump's reelection campaign. Attacking WHO and labeling it as "China centric" could incite many Americans to unleash their anger over the deaths of tens of thousands of Americans amid the pandemic as well as their severely impacted life. Canvassing gatherings cannot be held at this moment, so finding scapegoats to let voters vent their anger has become the best campaign tactic. The US recent years has intensified its anti-China ideology, targeting WHO and China together could fan as much nationalism as possible in the US and covertly boost Trump's reelection.

Those in the US Congress who are furiously blasting WHO are from the Republican party. The White House has taken state apparatuses and public interests as campaign resources. Such political operations are quite immoral.

The global virus fight is at a critical juncture. The novel coronavirus is launching indiscriminate attacks against all the people regardless of nationality or race. WHO is the authoritative body that can coordinate the global anti-virus fight. Washington's crackdown on the WHO is a blow to the global endeavor against the coronavirus. The US is making lives of numerous people pay the price for its political infighting. This is a bloody plan.

So far epicenters of the pandemic are mainly in relatively developed regions and those hardest hit countries have comparatively strong ability to stem the pandemic on their own.

However, the risk of pandemic hitting underdeveloped areas is growing increasingly high. Those countries will tend to rely more on the support and assistance of the WHO. Any move at this time that may paralyze and weaken WHO will foster the pandemic and place human beings in a more vulnerable situation.

Washington's attack on the WHO is so unpopular that no country in the world has yet echoed. Only the Taiwan bogus regime supported Washington out of its own political interests. This isolated camp - the US plus the island of Taiwan - well explains "an unjust cause finds scant support."

Washington's attempts to shift the blame onto other countries and international organizations are doomed to fail. Its own mistakes cannot be more obvious, and buck-passing will only drive people to further investigate and define its responsibility for improper handling of the outbreak.

The US' attacks against the WHO is groundless. Taking buck-passing as one of the main battlefields of the presidential election will very much likely to suffer losses.

A sovereign country that investigates the WHO and treats international organizations so arrogantly won't be supported by international law.

Washington evaluates the WHO in accordance with how the organization has served the US. This goes against the purpose of WHO.

Such an arbitrary and overbearing act will surely help the world see clearly the true nature of the ongoing conflicts between the US and international organizations.

The US has no ability to reconstruct an international system. What it is doing now is pure destruction. The acts of the US are throwing the world into chaos and crippling the global system. The US political and legal framework cannot restrain its government from acting at its own will. This is the misfortune of the US and the entire world.