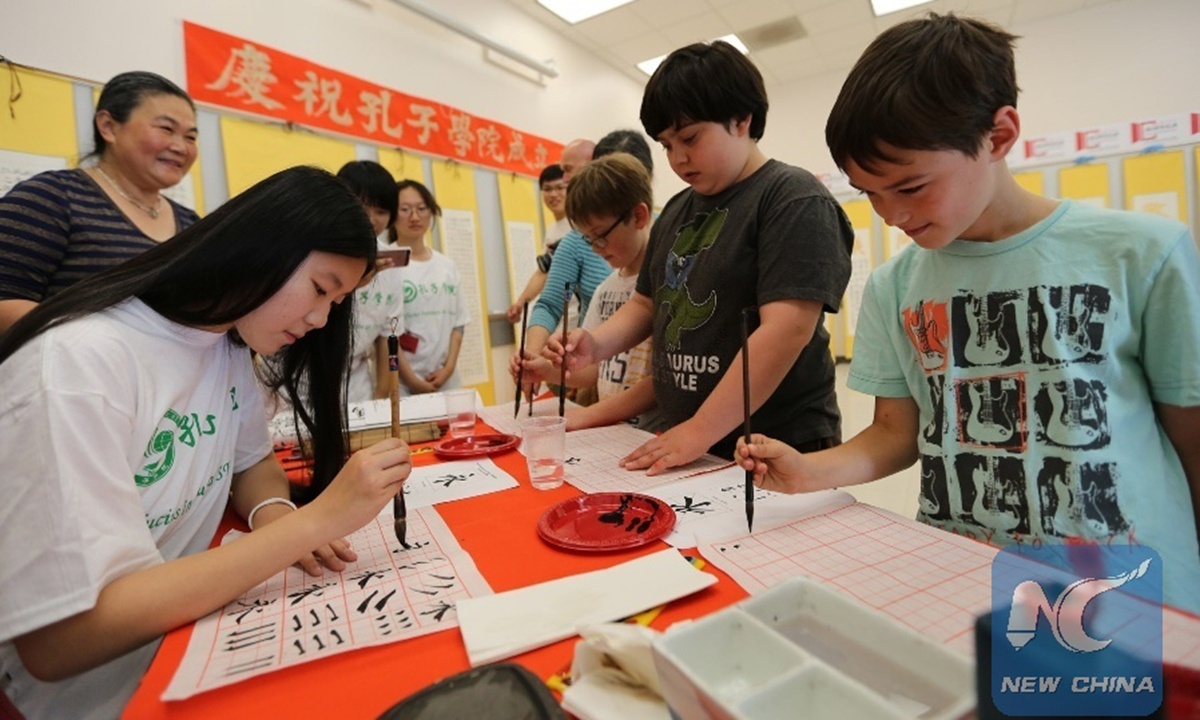 People-to-people exchange programs between China and the US, including the Confucius Institute programs, have been targeted by both US Congress and the US administration during the past three years.

According to Edward A. McCord, a professor emeritus of history and international affairs at George Washington University, Confucius Institutes (CIs) are the wrong target for China frustrations. Little or no actual evidence has appeared to support the charges against them. The campaign to push out CIs, however, fails to recognize the value these centers have provided in offering low-cost Chinese language instruction to thousands of young Americans.

CI programs are dedicated to enhancing educational and cultural exchanges through Chinese language teaching and people-to-people understanding. Ironically, there are individuals in the US who are attempting to politicize the educational efforts at CIs with absolutely no basis.

However, political pressures, including several legislations that put restrictions on US higher education institutions' eligibility to receive federal funding, have led to the closure of dozens of CIs. It thus scraps American students' access to firsthand experience of Chinese language and culture, and diminishes their opportunities to know about China and Chinese people. It harms students in areas of the country where accessing knowledge about China is difficult.

Recently, it has been reported in conservative media that the Biden administration has withdrawn a Trump-era rule which requires US higher education institutions and k-12 schools to disclose their agreements with CIs. State Department spokesperson Ned Price clarified during a press briefing that the reports were not true because the rule failed to be submitted to the Federal register.

Republican congressmen and Senators, including Kevin McCarthy, Michael McCaul, Chuck Grassley and Marco Rubio, are using this false assertion to bash the Biden administration for being soft on China and Chinese influence. Yet, they didn't provide any evidence or elaborate on any ill behaviors being conducted by the CIs.

In a letter addressed to "Leaders and Friends of Higher Education in 2018," Dr. Vivia Fowler, President of Wesleyan College, reassured that after review, there was nothing suggesting that CIs threaten academic freedom on campuses. President Fowler further noted that CIs should not rise to the level of national security concerns. She further recognized that CIs are valuable to Wesleyan College and to Middle Georgia, and that its programs and staff have been warmly welcomed by the campus and Middle Georgia community.

A report entitled "Chinese Influence & American Interests" featuring ideas and policy proposals from leading China specialists led by Larry Diamond and Orville Schell was published by the Hoover Institution at the Stanford University and the Center on US-China Relations of the Asia Society. The report has suggested that Congress distinguish between issues that present a real threat to the US and institutions such as CIs, which, as they noted in the report, can be better regulated by universities themselves.

Consequently, increased misunderstanding and mistrust have arisen between the two peoples. According to a Pew Center survey in September 2020, over 73 percent of American adults interviewed had unfavorable views on China. By comparison, it was 58 percent in 2019, with only 39 percent of Chinese people having favorable views of the US in 2020, according to a survey done by the US-based Eurasia Group.

Hopefully, the groundless allegations about exchange programs will cease, and normal policymaking will go forward with the new US administration.

It is now time for the Biden administration to rethink its China policy and most importantly, to reset people-to-people dialogue between the two nations.

The author is from the Center for Language Education and Cooperation. opinion@globaltimes.com.cn