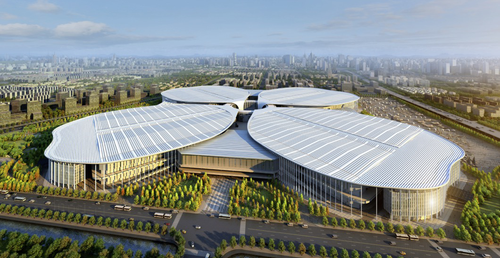 The National Exhibition and Convention Center (Shanghai), where the China International Import Expo is expected to be held. (Photo: Agencies)

The first China International Import Expo (CIIE) kicked off on Monday in Shanghai during which Chinese President Xi Jinping delivered an important speech. The expo can be deemed a launch ceremony for China's new round of opening-up at higher level. The Political Bureau of the Communist Party of China Central Committee held a meeting last week to analyze the current economic situation. During a symposium on private enterprises on Thursday, Xi stressed China's unswerving support for non-public sector development and said "private enterprises and private entrepreneurs belong to our own family". This is to clarify some domestic queries about ownership and to motivate China's internal reform.When facing the pressure of a trade war, whether to close the door or persist in opening-up is a comprehensive test for China. Compared with countries that plunged into full confrontation with US sanctions, China has taken totally different countermeasures. At the Boao Forum for Asia in April, Xi unveiled new measures for expanding reform and opening-up. CIIE was held as scheduled and with meticulous organization. This reflects China's resolution to open wider, regardless of changes in the international situation.China has implemented reform and opening-up despite all the setbacks. Chinese people are aware how important such an attitude and determination can be. As long as China follows the right path, it can deal with whatever difficulties happen.China has been outstandingly resilient and persistent under US trade pressure, with ample rationality and strategic wisdom. China is a unique country that has its own development plan and the capacity to properly adjust the execution of that plan.We believe that the Chinese people have more belief in the Chinese government's resolution of further opening up after watching the CIIE opening ceremony. Many have felt that China's recent policy emphases echo each other, showcasing a political will for boosting economic and social development.As the second largest power in the world, China is exploring ways to get along with other countries and in this process conflicts have arisen. While some countries are still hesitating, China's path remains clear and steadfast. China will carry out reform and opening-up at a higher level and there is no way back. Beijing has to achieve prosperity and long-term stability by diversifying domestic development and integrating more with the world. China needs to walk steadily on this path.What the West says about us doesn't matter. How fast China pushes forward reform and opening-up should be determined by the actual condition and has to meet public expectations. Policy proclamations have to be done to make people and international society feel the benefit.With the first-ever national import expo, China considers the US the main partner in its opening amid a trade war. As China strengthens, more challenges and responsibilities will come that require more wisdom and calm.